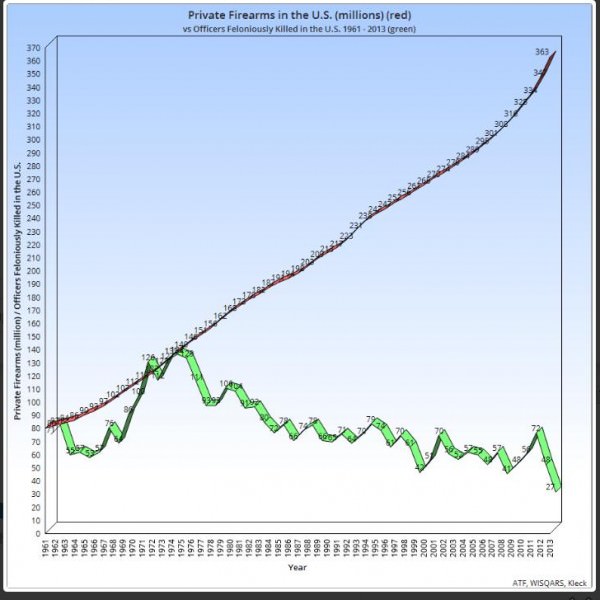 The number of private firearms was obtained from the ATF and “Point Blank”  by Gary Kleck, using Kleck’s method of calculating the numbers from ATF data, in this previous article.

The number of police feloniously killed was obtained from the FBI Uniform Crime Reports (UCR), or in some cases, secondary sources quoting the FBI UCR data.

The number of privately own firearms does not correlate with the felonious killing of police.

Hypothetical reasons postulated for a negative or positive correlation are abundant.

Many more could be listed.

Aside from hypotheticals, a large increase in the private stock of firearms has occurred at the same time as a significant decrease in the felonious killing of police.  Since the middle of the 1970s, the stock of private firearms has soared while the number of felonious police killings has drifted lower.

Now, in 2015, we are seeing a spike in officers killed.  The spike may be related to the enormous news coverage of unarmed  black criminals killed during encounters with police, and the seeming official disparagement of the police by the current administration.  In addition, the homicide rate is rising in urban centers where police activity has been reduced and/or police are being ordered to be less proactive.

Population of officers is going up as well, so the proportion killed each year has seen an even steeper decline.