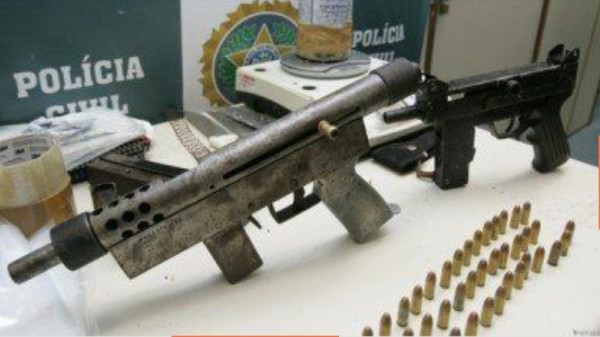 All firearms in Brazil are required to be registered within the state. The minimum age for ownership is 25,[5] and it is generally illegal to carry a gun outside a residence.[6]

Looking to the United States, where gun ownership has doubled, concealed carry licenses have tripled, and murder rates have fallen in half, the Brazilian Congress is considering a law to allow most people to own guns, buy ammunition in limited quantities, and allow a select number of people to carry guns for self defense.  From yahoo.com:

A draft law stripping away current limits has already been approved in committee and is due to go to the lower house of Congress in November.

Under the law, anyone over 21, including people accused of crimes or convicted of less than serious crimes, would be allowed to purchase up to nine firearms a year and 50 rounds of ammunition a month.

State employees and public figures, ranging from government inspectors to politicians, would be authorized to carry arms, as would private citizens often in the public eye such as taxi drivers.

At present, weapons can only be bought legally by people obtaining a license on a case-by-case basis.

The current restrictive law was passed in 2003.  As part of its passage, a deal was cut to hold a referendum on gun ownership.  In 2005 the government held a referendum which would have eliminated legal, private, arms.  It was defeated by a vote of nearly 2-1, with opponents getting 64% of the total.    From nbcnews.com:

With more than 92 percent of the votes counted, 64 percent of Brazilians were opposed to the ban, while 36 percent backed it, said election officials, giving the ’no’ position an insurmountable lead.

The proposal would have prohibited the sale of firearms and ammunition except for police, the military, some security guards, gun collectors and sports shooters. It would complement a 2003 disarmament law that sharply restricts who can legally purchase firearms and carry guns in the street.

10 years after the referendum, and 12 years after the passing of the draconian gun law, the murder rate has  remained essentially flat, with some small up and down variations.  The reform was part of the agenda of the centrist PMDB party.
It is not surprising that it was popular, when you consider the results of the referendum.  From Yahoo:

“Our proposal is to guarantee the good citizen’s right to self-defense,” said the law’s author Laudivio Carvalho, from the powerful centrist PMDB party.

The Brazilian retreat from citizen disarmament may be part of a larger movement.  The Panamanian government is also considering reducing restrictions on citizen ownership and carrying of arms, in order to reduce crime.

50 whole rounds….yeah THAT makes perfect sense. But at least it’s a start with 9 firearms a year. Just goes to show that Politicains aren’t the brightest of the species anywhere.

The three most useless things in the world
A dull knife.
An empty gun.
Obama.