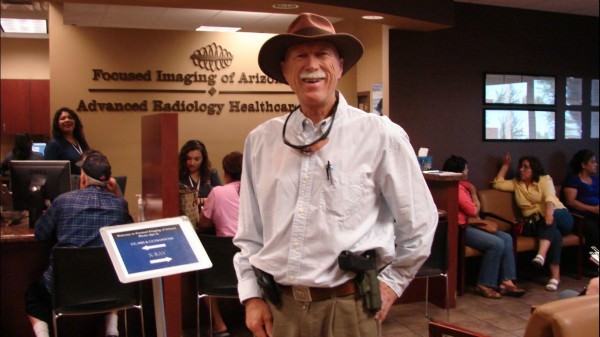 Arizona – -(Ammoland.com)-
I regularly open carry around town in Yuma, Arizona.   A couple of months ago, my Doctor recommended that I undergo a series of tests, mostly as a precaution.  My Doctor and I get along quite well.  She has never offered any complaint about my open carry in her office, and it has become something of a joke with the receptionist that I have to remove a considerable amount  of gear, including pistol, knife, phone, keys and other items before I weigh in.

My first personal physician in Yuma never had a problem either; he is a competitive shooter and worked with the local SWAT team.

I have openly carried for years in my Dentist’s office.  Dr. Browning is a funny guy.  I always have a great time when I visit him.  He must have told a pretty good joke when the picture was taken. 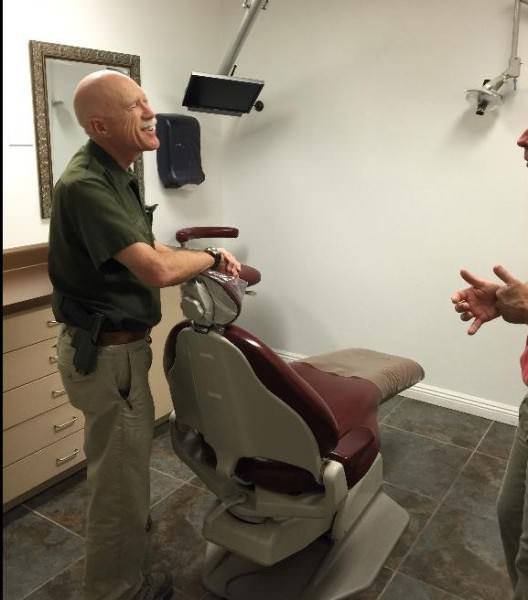 Dr. James Browning is, in my opinion, the best dentist in Yuma. The “dentists” in the nearby Mexican towns of San Luis and Algodones do not even come close. There is the added benefit of not experiencing the indignity of disarming when travelling to Mexico.

Dr. Browning may be slightly more expensive than other dentists in town, but the care he provides is superb. He works hard to keep up with state of the art technology and techniques. I had the unfortunate experience of having one of the Mexican practitioners break off a drill bit while doing a root canal. I clearly remember the loud SNAP when it occurred. I was assured that there was not a problem, and no one told me about the broken drill bit. Dr. Browning discovered it when it started causing serious issues, years later.   Dr. Browning told me that he regularly sees open carriers in his office.

At the Focused Imaging facility, I had to disarm while undergoing the CT scan. The metal would interfere with the scan. I was provided a bag to put my personal effects in. It travelled with me to the examination room. I told the technician about the pistol in the bag. She said that it was not a problem. Both she and her husband were “gun people” and went shooting on a regular basis.

I visited the Southwestern Eye Center to have my eyes examined. I went back to have a more detailed exam done by a glaucoma specialist. I open carried my Glock from office to office both times, and never had a complaint.

I had to have blood drawn and lab tests done at a local facility that specializes in such work. I visited three times and open carried each time. No one complained or even spoke to me about it. None of the facilities had any “gun free zone” signs on their doors.

The hospital complex seems to be the only dinosaur that insists in living in the past, where disarmists assume that more guns equal more problems. They have a no guns sign. As they are a public facility, they have to check your gun for you when you visit. I have done this a number of times, but not recently.

In one incident from a couple of years ago, I reminded the receptionist that they had a policy of checking guns, what the policy was, and how to do it. She contacted security who was supposed to come down and check the firearm. They did not arrive by the time my turn came up, so she just said to go in, “After all, we have armed police escorting prisoners in here all the time, anyway.” Security had not shown up by the time I had finished, so I left.

On another occasion, I was in the bathroom when security showed up. I heard the technician say “He is in there.” I was finished with the visit, but anticipated a verbal confrontation where I would have to educate the security officer. He said we could talk outside.

On the way out, I asked him if there was a problem. “No”, he said, “I just heard that you were here, and I wanted to know when your next concealed carry class would be held. I have been meaning to attend one when I can schedule it.” I gave him my card.

Went to the doctor for the annual check-up and had the same weigh-in experience except it also included 2 spare mags.
Prior to the doctors arrival I was given the blood pressure check and pulse count by his nurse. She then reached down and checked my ankles for signs of swelling without raising my pants cuffs. When she grasped my left ankle she recoiled and asked “How long has been larger than the right ankle ?”. I replied “Since I put on my ankle holster”. She smiled and went about her business elsewhere.

I should move from Mesa, AZ to Yuma, AZ. Can’t open carry into many places here, let alone a Doctors office. Even a local hamburger place has a “No Open Carry” sign in the window. Good work Dean.

Unless you have eyes in the back of your head; open carry invites you becoming a ‘free gun zone’. All it takes is a bop on the back of your noggin and now your sidearm belongs to someone else. Sure, you CAN carry openly; but WHY would you do so? You keep your cash in your wallet and not on the outside of your pants using contact cement, correct?