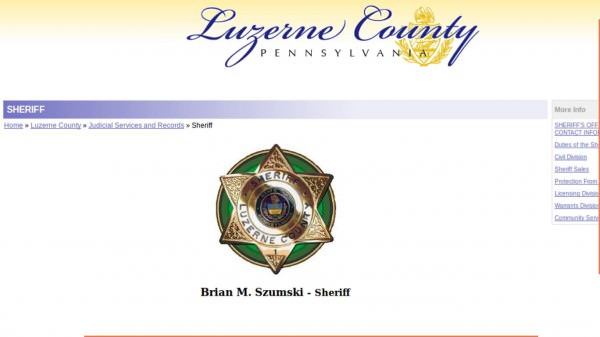 Arizona – -(Ammoland.com)- The Luzern County, Pennsylvania Sheriff’s Department has decided to auction off about 175 firearms, some air guns, knives and other items.  The items have been collected under a number of different administrations over 17 years, from 1993 to 2010.  Most of the items are from Prevention From Abuse (PFA) orders, temporary and permanent.  The Sheriffs office published (on their website, in a pdf file) a list of 154 cases that had expired, and told people who wanted their property returned to let them know that they wanted their property back.  That was done on 5 November of last year.   From the website(pdf):

Please be advised, a hearing has been scheduled for the following cases on November 5, 2014 at 10:00 A.M. at the Luzerne County Courthouse, 200 N. River Street, Wilkes-Barre, PA 18711 on a Petition to Dispose of Stored Weapons. These weapons were confiscated and stored pursuant to the following legal proceedings and the enforcement of the Pennsylvania Domestic Relations Code. At this time, despite the expiration of the court orders in the referenced cases, the weapons remain in the possession of the Luzerne County Sheriff. The defendants in the referenced cases are advised to appear at the hearing with identification and proof of ownership in order to seek return of the weapon(s). Further, you may appear any time prior to the hearing at the Luzerne County Sheriff to provide identification and certification of ownership of the weapons to seek return of the weapons. If you do not appear, the hearing will proceed based upon the evidence presented to the Court at that time and your weapon(s) shall be forfeited.

I contacted the Sheriff’s office by email and phone, but was unable to obtain specifics on what notification of individual parties might have occurred or been attempted.

Update: Sheriff Brian Szumski contacted me and confirmed that a good faith effort was made to notify the owners of the property.  From Sheriff Szumski:

Notification of the hearing was sent via US Mail to the last known address of the owner of the property. Additionally as you noted the hearing notice was posted on the County’s website as well as published in newspapers in our area.

Asking a court to direct return of property is much more burdensome than merely picking it up.  All of the items have been in the possession of the Sheriff’s Office for at least three years.  154 cases over 17 years is 9 cases per year.  The court hearing on 5 November, 2014, was required before the items could be sold.   I do not know if any attempt was made to contact individual owners.    From the timesleader.com:


If the restraining order is withdrawn, declined or expired, the defendant can petition the court to retrieve the weapons.

Weapons are considered abandoned if they have gone unclaimed for three years after a PFA lapses, though the county still needed clearance from a judge before it could sell or destroy them.

A court hearing on the county’s request to sell the weapons was held in November 2014, and only six citizens claimed their weapons.

One comment at the article said that the commenter had not seen any announcement in the paper.

I don’t ever remember the information listed about claiming your firearm in the paper.

The Sheriff was concerned about liability.  This seems a bit overblown, considering that the items can easily be transferred through a Federal Firearms License (FFL) holder.  The Sheriff made this determination, and changed his mind.

The sale, which has been in the works for more than a year, will generate revenue for the cash-strapped county, free up storage space and reduce liability, said county Sheriff Brian Szumski.

Szumski initially opposed the sale of weapons, worrying the county could be sued if a weapon was auctioned and then involved in a crime.

The same safeguards could be had by requiring that individual bidders have their purchases transferred through an FFL.  This would have resulted in more money (and a bit more work) for the Sheriff’s Department.   Some departments have followed this model.

The public will not be allowed to bid on the lot, but they will be allowed to view the items, in a severely restricted way, for 1/2 hour on January 9th.  Prospective buyers with an FFL will also be able to view the items, but for a longer period.   I would like a citizen reporter to obtain permission to view the firearms and take pictures for the rest of us.  I do not know if the Sheriff will allow photography.

Touching the firearms will not be allowed by the public.

125 rifles and shotguns, 50 handguns, 20 air guns, 15 bows and 120 knives and other items could be work viewing.  If you manage to go; try to take pictures.  If you are not allowed to take pictures, please send us a report of what you saw.