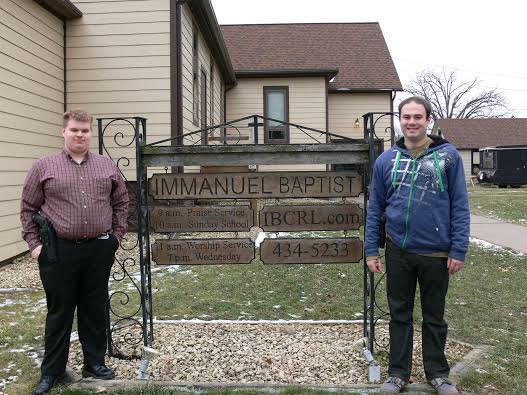 Arizona – -(Ammoland.com)- Both people in the picture above are open carrying.

A correspondent reports on open carry at a church in Northern Wisconsin.  There is a sign near the entrance that says that legal carry of guns is welcome.

Wisconsin is underrated as a pro-Second Amendment state. The state never outlawed open carry, even if the urban areas routinely violated Second Amendment rights of citizens before 2010. Wisconsin passed a strong amendment to the State Constitution in 1998, affirming the right to keep and bear arms for all “legal purposes”. Art. 1, Section 25, reads:

The people have the right to keep and bear arms for security, defense, hunting, recreation, or any other lawful purpose. (Art. 1, § 25)

Wisconsin has an impressive gun culture, which explains the lopsided vote. But it took 12 more years for the State to pass a shall issue concealed carry bill, a process that involved at least two vetos by Democrat governor Doyle, veto override attempts that were subverted by Democrat legislators switching their vote, and a liberal supreme court refusing to uphold the plain wording of the Constitutional amendment. Wisconsin became the next to last state to provide for legal concealed carry by people who were not state agents.

As part of the shall issue act, the legislature made certain that merely openly carrying a firearm could not be considered disturbing the peace, the offence that open carriers had been charged and harassed with in urban centers.

At the Immanuel Baptist Church in Rice Lake, Wisconsin, open carry in church started about six months ago. I talked to Pastor Eric Buhrow about how it occurred.

In Wisconsin, as in many states, a person must be 21 before they can obtain a concealed carry permit, though they may legally open carry firearms, including handguns, at 18. A number of parishioners carried concealed weapons during church services, but Pastor Buhrow’s son, at 19, was not yet eligible for a permit, so he started carrying openly.

Pastor Buhrow said that once the example of open carry happened, other people started carrying openly at church. Open carry is now a common occurrence.

I have seen similar phenomena at other churches. It only takes one brave person to lead the way.

Pastor Buhrow says that the area has a strong hunting and gun culture.

Carrying guns in church has a long tradition in the United States. It was required in colonial Virginia; from the Virginia laws of arms bearing.

All men that are fitting to bear arms, shall bring their pieces to the church…

Even in the 1950’s in New York City, people who were going hunting sometimes carried their guns into the church because they did not wish to leave them outside in the car. There were no complaints.

Perhaps the most famous case of someone carrying in church in the last few years was that of Jeanne Assam, who stopped a mass killing at the New Life Church in Colorado in 2007. While most accounts say that she was a “security guard” she was just a parishioner with a concealed carry permit who volunteered to help with church security. Other than the carry permit, she had no special legal status.

Kudos to them for being willing to exercise their constitutional rights and Christian principles at the same time…two set of beliefs that are NOT incongruous.

“Carrying guns in church has a long tradition in the United States. It was required in colonial Virginia; from the Virginia laws of arms bearing. All men that are fitting to bear arms, shall bring their pieces to the church…”

It is sad to see how far Virginia has declined in light of recent Executive Action to disallow most out of state CWP’s.

Great to see this church recognizing our God given rights though!