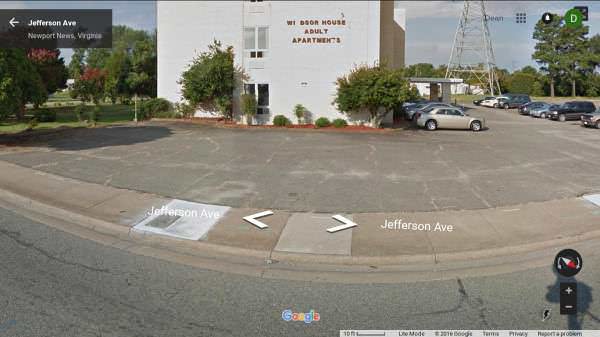 Arizona – -(Ammoland.com)-
An open carrier in Virgina is reported to have had his handgun stolen in Newport News, on January 29th, 2016.  The location is listed as on the 6000 block of Jefferson Avenue, and is said to have happened about 8 p.m.  From dailypress.com:

The victim, a 37-year-old Hampton man, told police he was robbed as he walked across Jefferson Avenue to the lot at the Windsor House after visiting a friend at the Travelers Inn. He was wearing his handgun in a holster, open carry, on his hip, Eley said.

The man said he was approached from behind by two men, and one of them demanded his gun. The other then grabbed the gun from the holster and pushed him to the ground. Both men fled on foot southbound toward the trailer parks, Eley said.

This is only the third instance of an open carrier being robbed of his weapon that I have seen reported in the last 10 years.  All were at night; one was in Miwaukee, where the robber approached the open carrier from behind; the second was in Oregon, where the open carrier was forbidden from having the firearm loaded while open carrying, and this is the third.

In an attempt to understand the dynamics of this case a bit better, I did some Internet research and used Google maps to see the location.  It is at 6035 Jefferson Avenue.  That is the address of Windsor House.  You can see the parking lot clearly.

I wonder how dark it is in this location at 8 p.m. on January 29th, and if the robbers knew the victim was armed before they attacked.  I did not see any street lights, when I scanned the street view on google maps.  Windsor House is an apartment complex, the side toward Jefferson Avenue only shows three windows,  so there was not much light from the apartments.  There are no windows on the street side of the building across the street from the Windsor House, and the area is not intensively built up, as you can see from the overhead view. It is possible that this was a planned attack to get the firearm. However, there is no mention of the robbers being armed.  Perhaps the robbers knew that the open carrier was impaired in some way. It is not common for robbers to go up against a known armed man, unarmed, in a planned attack. It seems likely that this was an opportunistic attack, where, as has happened with some concealed carriers, the attackers did not discover that their victim was armed until after they had initiated the attack.

It would be appreciated if any people in the area could describe how well lit that area of Jefferson avenue is after dark at this time of year.

If you can, take pictures.

Open carry in places like Alaska is necessary , people get robbed , so be it . We need it because 4 legged creatures out weigh the 2 legged. Atleast the good guy with a firearm didn’t get hurt. Maybe next time good guy kills both bad guys.

Why do I see so many comments attacking the open carrier? Agree with the practice or not, it is legal. Instead you pick on the guy exercising his rights instead of the thug that robbed him. Physical force was used meaning this is a felony (robbery).”

As a cop I get sick of the liberals that attack legal citizens regardless of the topic. You folks need to wake the hell up and start focusing on those committing the crimes!

Jefferson Avenue in Newport News, after dark (and it was at that time) is not a place to be prancing around. If you’re armed it should be concealed, or you should have it available to you in your pocket (concealed). That man is lucky all he got was robbed. I know the area, and Hampton isn’t much better.

“… guns should be free to carry any way you want…” I agree. “Shall not be infringed.” means exactly what it says. Yet simply because something (like method of carry, particularly) is LEGAL and POSSIBLE does not make it an optimally safe, efficient, or intelligent choice! [The Faulkland Islands has a population of over 3 million penguins. During the 1983 war, those penguins displayed a fascination with warplanes. As the planes flew overhead, all the penguins watched intently… and uniformly fell over backwards, like bowling pins (which British pilots considered hilarious). The simple lesson is that, even if 3 million… Read more »

“Licensed” carry = gun control. Don’t you guys get it? After a while only people with a “license” can have a gun. First confiscation will be from “licensed” dimwits. Look at what happened when magazines were banned. This guy should have had situational awareness and guns should be free to carry any old way you want (shall not be infringed).

“Does not matter if you are aware of your surroundings or not.” That is the voice of inexperience. Maybe the author does not understand what all situational awareness (hereinafter: SA) entails. SA requires you to know more than where you are but also where are the exits, where is the the cover, the angles, an analysis of the people and their movements around you, how your partner will react, and what the plan is.

My former federal agency drilled situational awareness and weapons retention into our heads on a regular and rigorous basis. Apparently the National Firearms Unit saw some value in them.

Open carry certainly gives away a huge advantage, unless the open carrier is some kind of bait.

Firearm or no firearm, the ones that act stupidly (e.g. no concept of situational awareness; no scan, scan, scan; no back to the wall; no evaluation of potential predators; failing to dede mouw early) will be the victims. And even with good technics and practice, it just might be your turn to get dead.

This is a bad part of Newport News, not very well lit or traveled after dark. Trailer park, low rent apartment building, Travel Lodge….. Sounds like he definitely needed a carry gun, obviously a better holster, and a back up weapon.

Situational awareness completely disregard. Unsecure firearm. Proof that open carry makes you victim before you can react. Idiot. Dumb a– article trying to find blame anywhere but with the idiot carring the gun. Lucky they didn’t shoot him. First move should have been hand to grip. Or, retenion holster. Or, not been in a bad area where there were no lights. Preferably the latter. Oh, yes, I carry. Concealed in a State where I can open carry or conceal. Back up just in case. I don’t go anywhere that looks dicey by myself and is too dark to see well.… Read more »

Joe: Does not matter if you are aware of your surroundings or not. You don’t have eyes in the back of your head and action always beats reaction, period. Don’t be part of a ‘free gun zone’; carry concealed!

I’m personally not a fan of open carry, but something to keep in mind is that the only time someone open carrying will make the news is one of these situations

1) There was an open carry rally or protest.
2) The police were called because someone saw a firearm in public and panicked.
3) They were attacked and their firearm stolen.

“Person openly carries gun and nothing happens” isn’t going to get reported, which leads to a mixture of selection and confirmation bias regarding open carry.

Actually, just last year a retard was open carrying in Gresham Oregon at 1am, and a hood-rat walked up, pulled a gun on him, and robbed him of his new .22 pistol.

Carry a backup weapon,I do ! They grab my holstered weapon their problems will just begin.

Peoplewho open carry are idiots. Its no different than walking around with lot of money sticking out of your pocket. Sure as hell, someone will take it. The guy asked or it. Not responsible gun owner.
Wan t so touhh, was he?