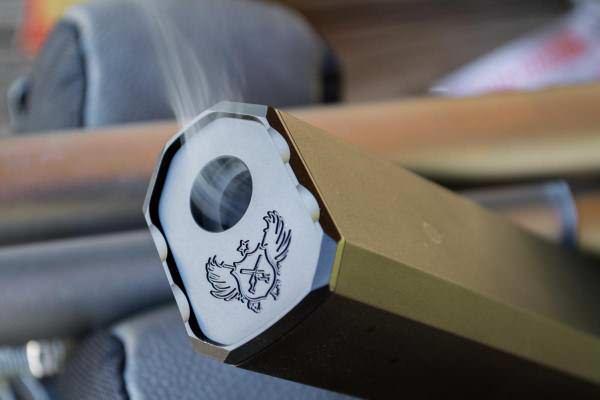 USA –-(Ammoland.com)- I don’t want to jinx the mojo on this, but it looks as though silencers may come off the “Mother, may I?” list before email servers actually fly out of Hillary’s butt.

Introduced by Rep. Matt Salmon (R-AZ) back in October 2015, the Hearing Protection Act aims (see what I did there?) to remove suppressors from the onerous requirements of the National Firearms Act. It’s perfectly legal for anyone legally eligible to buy a gun to acquire a suppressor in 41 of President Stompy Feet’s 57 states. The only gotcha is that you have to do things like send Uncle Spendy $200, fill out lotsa paperwork, ask extra special permission, and submit a left butt cheek print to the Bureau of Alcohol, Tobacco, Firearms and Explosives. The Hearing Protection Act would basically make the process of buying a suppressor identical to that for buying the gun it goes on.

Of course, not everyone agrees this is a good idea. Never one to miss out on an opportunity to have a hysterical meltdown, Violence Policy Center Legislative Director Kristen Rand said, “Even though silencers are currently difficult for private citizens to obtain, they have already been used in horrific crimes.” Well, so have spatulas, toilet tank lids, and a jar of gherkin pickles.

Oh, and by the way, according to an NSSF report, “ between 1995 and 2005, the researcher found 153 federal criminal cases involving suppressors, only 15 of which involved the actual use of the suppressor in the commission of a crime.”

OK, enough on the politics. Suppressors rock. They provide essential protection against hearing damage, make ranges more friendly to neighbors, and can actually make you shoot better. While they don’t make guns more accurate, removal of that distracting conflagration in front of your face allows you to focus, undistracted, on proper shooting fundamentals. Oh, and they’re more fun than running your own Guppy Mill for fun, profit, and unlimited seafood snacks.

Since we’re on the verge of easily accessible silencers for all, I thought it might be appropriate to whip up a list of five pistols that are sooper-dooper for suppressor use. Here goes…

There are a number of rimfire pistols that are really great for suppressor use including the new Smith & Wesson Victory, lotsa different Ruger models and pretty much anything jazzed up by the folks at Tactical Innovations. I choose the Smith M&P22 Compact for this list because of its perfect balance with small and uber-light .22LR suppressors. The adjustable sights are just high enough to clear most (if not all) standard sized .22 cans and the rail up front allows you to attach a light or laser. That makes this combo a supreme setup for nocturnal rodent elimination. The short barrel keeps even most (not all) high velocity .22LR loads below the speed of sound, so it’s quiet. The barrel comes threaded, but since the threading is internal to the slide, you’ll need an adapter to mount your silencer.

I bought one of these after reviewing it a back and it’s really grown on me. As a .45, much of the standard ammo is already subsonic, so it’s quiet without making an extra effort in ammo selection. For a gun that packs 15+1 rounds of .45 ACP, it’s not as big as you might expect. The factory sights are not only Tritium-powered, but they’re also tall enough to see over every suppressor I’ve put on it so far, even the larger multi-caliber models. With all these can-friendly features, you know the barrel is threaded and ready to go. This gun rocks for silent running. I keep a SilencerCo Osprey 45 on mine. It not only looks cool, but the more rectangular shape of the suppressor keeps the width of the overall package about the same as the slide. Oh, I almost forgot to mention the niftiest suppressor-friendly feature. The FNX Tactical comes with an optics ready frame so you can stick something like a Trijicon RMR up top. The dot clears the suppressor body so it makes a great suppressor-friendly sighting option.

Relatively new on the suppressor ready block are the 9mm and .45 ACP Springfield Armory XDM models. Springfield builds both models from the 4.5” XDM frame, then adds some tweaks for suppression. The 5.28-inch barrels are pre-threaded and suppressor height sights are standard. The 9mm packs 19+1 capacity while the .45 model fits 13+1. Try American Eagle’s new 9mm and .45 ACP Suppressor ammo in these and you’ll be happy. It’s not only subsonic but makes use of lower “gunk” powders so you have less to clean up after shooting silently. The 9mm also loves most 147-grain loads as they tend to be subsonic too.

Glock G-Pretty Much Any Model

Even though you have to buy your own threaded barrel to swap with the factory one, Glock still makes the list. Here’s why. Replacement threaded barrels for Glock models like the G26, G19, G17 and a host of others are very reasonably priced. While other threaded barrels can easily run into the two c-note range, Glock threaded barrels from suppliers like Lone Wolf are usually just over a hundred bucks. Also, everyone and their brother makes aftermarket sights to fit Glock pistols. As a result, it’s easy to find suppressor height sights. On a whim, I suppressed the little Glock 26 and that turned out to be a great combination.

If you haven’t noticed, Sig Sauer is going nuts with new models of everything from pistols to rifles to optics to suppressors. Now that they make their own pistol and rifle silencers, you knew that off the shelf models of their most popular pistols couldn’t be far behind. While Sig has offered P226, P229, P320 and other models with threaded barrels for a while, you had to order suppressor sights separately. New for 2016, you can order P225s, P226s, P227s, P230s and others ready to go with sights and threaded barrels. Many of the models with factory suppressor sights are brand new, so available may be more “soonish” rather than “nowish.” Also, the Sig folks showed us a slew of optics ready models that will make excellent suppressor hosts, but those will probably hit the streets later in the year.

The original Beretta 92FS and M9 models are actually great hosts for suppressor use. Back in the day before silencer boosters made most any gun reliable, the straight back recoil action proved itself compatible with suppressed function. However, the standard sights were too low and you had to buy an extra barrel. The new M9A3 model sports a threaded barrel right off the bat.

Like the Beretta, new Smith & Wesson M&P Threaded Kit models come with threaded barrels ready to go in both 9mm and .45 ACP. I’ve been testing the .45 ACP version for a few months and it rocks. Easy to shoot and reliable, the only thing missing is suppressor-friendly sights. You can get them from Dawson Precision, but it would be better to have them installed in the factory model.

Oh, since you’re here, how about taking two minutes to add your support to passage of the Hearing Protection Act? Do it for the children, OK?

And more more thing, if you now feel the need for quiet, get in touch with the folks at Silencer Shop. They’ll help you navigate the process of getting your very own slice of silence.

Tom McHale is the author of the Insanely Practical Guides book series that guides new and experienced shooters alike in a fun, approachable, and practical way. His books are available in print and eBook format on Amazon. You can also find him on Google+, Facebook, Twitter and Pinterest.

Not every gun owner is a Republican, or even a conservative.

Alienating half the country with b.s. political commentary in an otherwise informative article not only undermines your credibility and limits your audience, but it potentially contributes to the further deterioration of our 2A rights.

We need all the gun enthusiasts we can get, regardless of their opinions on other issues like abortion, immigration, taxes, etc.

As much sense as you voting for the party that wants to take your gun.

Everyone in this reply chain is a moron.

Fuck Off
Reply to  Hugh Jainus

that means you are too troll fag.

You are right. Im arming myself against the gun nuts. They’re who scare me.

No mention of HK USP Tactical models, which are pretty much built from the ground up to be great suppressor hosts, but you listed Glocks, which, aside from price, are awful suppressor hosts (mostly due to shorter unlock times meaning they’re gassy and blow a lot of crap back into the gun / out the ejection port, and they’re more finicky about running reliably due to the amount of barrel tilt)?

Beat me to it – hard to take anything else this author says seriously after that omission.

Who is “hard talking” clown?

My Glock 19 gen4 will not eject spent casings, guessing it’s the weight of the silencer restricting the action, using a Silencerco Hybrid

Again, lets point to CZ and the fact that they have the incredibly SP-01 full size and P-01 carry in suppressor models…as well as barrels for separate purchase. Their testing proves an accuracy with suppressor UNsurpassed. To top it off, these world class models are a fraction of the cost of their closest rival (in performance) Sig Sauers.

You seemed to have missed a very popular Choice that comes from the factory with a threaded barrel and a reputation for being a high quality firearm and very nice host.

The Walther PPQ Navy, the M1 or M2 both are great hosts.

So many great firearms not on your list nor honorable mention such as the Cz usa suppressor ready models all, Remington r1 1911 suppressor ready.
Only five models to small of a list .

Charlie, suppressors are legal to own in Ohio but not legal for hunting use… Or only on a limited basis now I believe. But, regardless, you ARE allowed to own one and I highly recommend purchasing one before the “41F” ruling goes into effect making it harder for people to purchase suppressors using a trust. On July 13, 2016, in addition to a trust, you will need to submit fingerprint cards and a photo that has been taken within 12 months of your most recent application for a form 1 or form 4 tax stamp. Whereas right now, all you… Read more »

I live in Ohio, what is required to own and use a suppressor? Thanks Charley!

Hi Charley, under the National Firearms Act of 1934, you need to pay a tax and register in order to own a silencer. There are a variety of ways to do this, including completing the paperwork as an individual or with a specialized trust. Consult a competent lawyer in Ohio for more information on how to form a trust in your state. If you can find a local dealer who sells these items, they can probably point you in the direction of a lawyer who would be able to assist you. There are also website that sell legal forms for… Read more »

Many hunters use them on their rifles to protect their hearing. It is convenient to use when I instruct my kids at the range, and for those sensitive to recoil, it also takes away about 30 percent of that.

I think you missed the mark on this one, the downside to using a suppressor with any pistol is the amount of crud that collects in the action during firing and the resulting cleaning job that ensues. For that reason alone, the Sig P-250 or P-320 are hands down the best pistols for suppressor use. Because of the removable serialized fire control assembly; cleaning either of these Sig’s after use with a suppressor is a dream in comparison to cleaning any of the pistols listed in the article. The P-250 only suffers in this regard due to the limited availability… Read more »

Great article, I just got and XD(M) .45 for that very purpose. Now how about a review of suppressor?