Arizona – -(Ammoland.com)- My Colleague at Gun Watch, John J. Ray (M.A.; Ph.D.),  has published extensively.  He has some insight into the recent “study” published in the Lancet:

The major British medical journals are heavily politicized — both Lancet and BMJ. Lancet even criticized the Iraq intervention under George Bush II. When they stick to their knitting — medical research — they do publish some good studies and are prestigious because of that. But the people running the journals are obviously Left-leaning — like most academics — so they can’t help misusing the platform they have to hand in order to promote their Leftist views.

That is of course bound to be an amusing exercise.  Leftist claims are so counter-factual that a political study is bound to require all sorts of distortions and evasions to make any case at all.  And the political studies they do publish are so unscholarly that the editors have obviously put their brain into  neutral before publishing them.

The latest such study in Lancet (“Firearm legislation and firearm mortality in the USA: a cross-sectional, state-level study”) is a good example of that.

An article covering the “study” in The Hill starts out with pure misdirection: From medicaldaily.com:

The United States has some of the most lenient gun ownership laws in the world. It also boasts one of the highest gun-related death rates of any country. Researchers from Boston University say the U.S. can cut those deaths by more than 80 percent by enacting three specific laws on a federal basis. These rules would require background checks for all ammunition and gun purchases as well as ballistic imprinting or microstamping of firearms so they leave identifiable traces when fired.

Brazil, Jamaica, Mexico, Panama, Venezuela, and South Africa have much higher “gun related” death rates than the United States.  but the very term “gun related” is a propaganda term.  It includes suicides, which are about two thirds of the total for the United States.  When you look at total homicide and suicide rates, the U.S. is far from the top.  Using the Washington post pick of 26 “developed” countries, this is what we come up with: 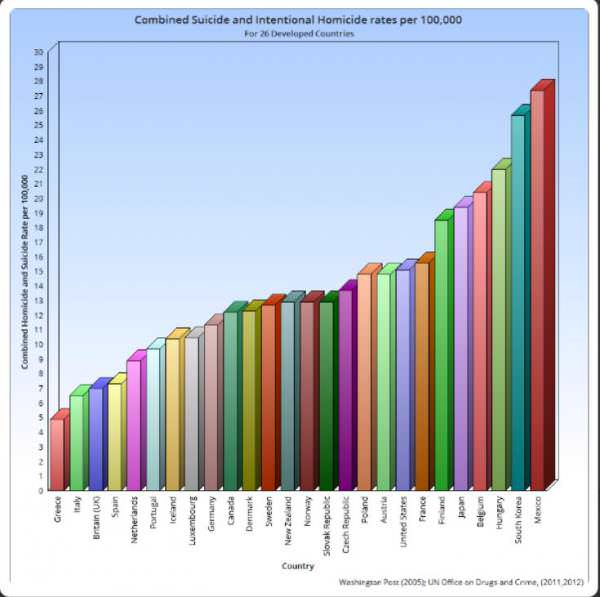 You can see that the U.S. is a little closer to the top than the bottom, but not by much.  As a multicultural society, I would expect as much.  Suicide and homicide are culturally driven, not implement driven.  After all, there are a lot of people from Mexico, and other cultures in the United States.

The “study” claims that:

“Background checks for all people buying guns and ammunition, including private sales, are the most effective laws we have to reduce the number of gun deaths in the U.S.”

Yet two thirds of “gun deaths” are suicides.  How would background checks stop them?

Not a single crime has been solved by the ballistic identification laws.  Two of the three states where they were passed  have repealed them because they were so costly and ineffective.

Not one state has implemented a microstamping law.  Yet the “study” claims that microstamping and ballistic imprinting laws reduced gun related deaths by 84%!

States that have more hospitals have more deaths in hospitals.  That does not mean that hospitals cause the death rate to rise.

“We remain committed to treating gun violence as the public health issue it is, which is why we need the best researchers in this country working on this topic,” a White House spokesperson said in a statement.