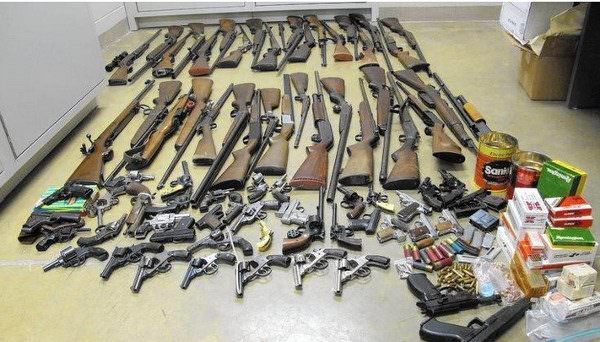 Arizona – -(Ammoland.com)-
Two years ago, Romeoville Illinois held a gun “buy back. They took in 73 guns, pictured above. Some of those firearms are very nice indeed, and worth much more than the $60 that police were paying people for them. Third from the left of the middle row of long guns appears to be an M1 carbine and sling. Two over on the left is a classic .22 target rifle, two over to the right a classic hunting tool, a pump action .22 rifle, probably a Winchester 1906.  In the center of that row are two Stevens Crackshot .22 rifles, highly desired. There are numerous pump shotguns, probably a .22 levergun in the back row.  On the right of the middle row it looks like a Carcano in full military gear.

All the ammunition was turned in for free.

Most of the pistols were inexpensive, but there was a Ruger convertible single six with the extra cylinder, a P38, a Glock long slide and a number of older top break revolvers.  Several of the guns were worth several hundred dollars. There might be a couple not worth the $60 given for them.

Setting up to purchase the guns that will come in to the turn in would be a bit of a challenge. The “buy back” will be held at the Police Department. From patch.com:

Residents can turn in weapons, no questions asked and without penalty — even if they don’t have a FOID card — and get $60 in return. “Cash will be paid on the spot for each weapon turned in,” police said. “Ammunition may be turned in as well; however, there will be no payment to individuals turning in ammunition only.”

Illinois residents are not allowed to buy or sell guns without a Firearms Owners Identification Card (FOID), yet the police are giving people without cards amnesty.

The amnesty is  only to transport the firearms to the drop off point. It is likely that some of the best and most collectible firearms will be turned in by widows and other inheritors who do not have a FOID card.

It would be illegal to purchase a .416 Rigby double rifle or a classic Colt Single Action from them. In addition, people with FOID cards are required to wait 24 hours to transfer a rifle or shotgun, and 72 hours to transfer a pistol.  During this period the seller is to contact the State Police and insure that the FOID card is valid.

It is easy to understand why so many valuable firearms are turned in to police at these events in Illinois. The bureaucracy required for private sales becomes extremely cumbersome and burdensome.

It is in the few states that have such burdensome requirements on private sales that gun “buybacks” continue to exist. In states with free market private sales, private sellers organize and purchase the desirable guns before they are turned in to police to be destroyed.

But private purchasers are not allowed to offer amnesty in Illinois. If a widow has her former husband’s $30,000 dollar collection of hunting rifles, she cannot legally sell it, even to a dealer, until she obtains an FOID card.

It is a form of confiscation by bureaucratic regulation. A bill was filed in Illinois this year for police to actively track down people who had not renewed FOID cards, to confiscate their guns. Fortunately for widows and other inheritors, it did not pass.

Just thinkin. What if, someone were to offer $65.00 for unwanted firearms ? Having all the legal cards,forms,etc.. Couldn`t a licenced dealer do it ? Also offer besides the $65.00, free pick up. No need to travel.

I didn’t buy my guns from the Police, so how are they going to buy it back?

My favorite are the Chicago “Buy Backs”, where the police have a table full of guns set up for a photo op. A few years ago a reporter for the Chicago Reader, noticed that the tags on these show guns were 5 to as much as 10 years old. In short, they had nothing to do with the turned in guns. I also noticed there was a beat up 1st Generation Colt SAA that kept showing up in the photos year after year. What are the odds people kept finding a SAA in their sock drawer for 5 years in… Read more »

There might be an opportunity to set up an “appraisal desk” outside the buy back location to let people know what their firearms are worth. That might discourage some uninformed sales to the buy back program, and if some choice firearms are spotted, a legal sale could be arranged.