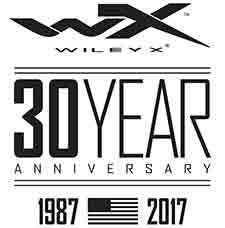 USA -(Ammoland.com)- Wiley X-sponsored driver Joey Logano reached a few major milestones on Sunday, April 30, making his 300th Monster Energy NASCAR Cup Series start, winning his first race of the 2017 season and notching the 18th victory of his young career. All in all, not a bad day’s work for the 26-year old racing phenomenon.

This victory in the Toyota Owners 400 at Richmond International Raceway was far from easy for Logano, as he had to fight his way from the back of the pack for the win.

A post-qualifying transmission change forced Logano to start the race at the rear of the pack, and it took him all afternoon to work his way into the lead.

He took his first lead on Lap 384 after restarting behind six cars that had opted not to get fresh tires under caution for a crash on Lap 377.

The call to pull out for fresh tires was a wise one, as Logano made quick work of the cars ahead of him and grabbed a lead he wouldn’t relinquish over the final 16 laps. It was nip-and-tuck, however, as Logano had to hold off his hard-charging Penske teammate Brad Keselowski over the final laps, beating the car by only a few car lengths when the checkered flag finally dropped at the end of Lap 400.

“We’re glad to see Joey get his first win of the season and we’re especially proud of how he fought so hard to get it,” said Wiley X Co-Owner Myles Freeman, Jr. “To battle all the way from the back of the pack against competition like this is testimony to Joey’s competitiveness and never-say-die attitude. We know he’s going to have a great racing season this year, and we’re all looking forward to being along for the ride,” added Freeman.

The day also saw a strong performance from Kevin Harvick, who is also sponsored by Wiley X. Harvick actually held the lead for a while and was running in the Top 5 for much of the race. Following a pit stop that dropped him back several positions, Harvick fought his way back for a 5th Place finish, giving Team Wiley X a solid two drivers in the Top 5 at Richmond.

Top drivers like Logano and Harvick depend on the sharp, undistracted vision and Absolute Premium Protection Wiley X sunglasses deliver, both on the track and in their everyday lives. Every adult sunglass style made by Wiley X meets ANSI Z87.1 High Velocity and High Mass Impact Safety Standards, for protection that goes far beyond the harmful rays of the sun.

Several styles also meet U.S. military MIL-PRF-32432 (GL) standards for ballistic eye protection, a key reason why the Wiley X has been a leading provider of vision protection equipment to the U.S. military and law enforcement for 30 years.

To follow all the racing action and the accomplishments of Wiley X’s sponsored NASCAR drivers during 2017 — or explore the company’s complete line of advanced eyewear products providing all wearers with Absolute Premium Protection — visit their website. Or contact Wiley X at 7800 Patterson Pass Road, Livermore, CA 94550 • Telephone: (800) 776-7842.

Wiley X is a leading provider of protective eyewear for Army Rangers, Navy SEALs and other U.S. Special Forces Units in action around the globe. We began by creating shatterproof, selenite, polycarbonate lenses. Some models have been tested to withstand a 12-gauge shotgun blast from 10 yards away. Factor in sleek design and proprietary technology, and our list of admirers has reached international acclaim. Nationally, we’re currently a standard issue item with the FBI, DEA, Army Rangers, Navy SEAL Teams and Military Special Forces.