U.S.A. –-(Ammoland.com)- After spending a week in Las Vegas and walking the endless aisles at SHOT Show, here are my top five new firearms for the new year. These rifles/pistols are for one reason or another a product that I think will not only excite firearms enthusiasts but show innovation and growth from that company. More important, these firearms all continue to develop upon my favorite firearm platform: the AR-15.

First and by far my favorite product at SHOT Show this year, Brownells newest addition to their Retro line, the BRN-180.

Based on Armalite’s AR-18 and civilian AR-180, which was originally designed in the 1960s as an upgrade to the M16 service rifle. Brownells’ BRN-180 features many updates to this historic design.

Built on a reliable gas piston system, with a bolt carrier that rides on a pair of guide rods inside the upper receiver. This allows the BRN-180 upper receiver to function with any mil-spec AR-15 lower receiver! Although this compatibility is by far the best feature there is still much more, including the ability to utilize a side folding stock and remain functional while in the folded position.

Brownells BRN-180 is by far the most exciting product to be announced this year and with pre-orders currently selling at $799.99. Overall there is no doubt that this upper receiver deserves the first spot as the most interesting and awesome retro rifle to arrive yet!

Angstadt Arms was recently chosen by the US Army as one of six companies competing Sub Compact Weapon Program contract requesting an ultra-concealable 9mm sub-machine gun. Angstadt brought to the table the SCW-9 Sub-Machine gun and included design features such as last round bolt hold open on an empty magazine, the use of GLOCK magazines, and their patented SCW Stock.

Looking at this sub-gun it is very easy to see how this platform could be concealed, under a coat or in a bag by a security detail. The overall length when the stock is deployed is only 14.7”!

The most exciting part of the platform is the SCW stock system that will not only feature in the Army contract but will also be available for civilians and will work with AR-15s. The SCW stock is the shortest AR-15 stock on the market at only 2.5” collapsed.

The SCW stock rides high enough along the upper receiver when collapsed that it still allows full operation of safety selector. Also, the SCW stock only has one rail on the left side of the receiver which will allow unencumbered access to the forward assist on AR rifles. One last feature of the stock is that it does not have a button to extend it to the rear, simply pulling on it will place it into the extended position, making for much faster deployment from concealment.

In case you were wondering, yes, Angstadt is already developing a pistol brace similar in length and design to the SCW stock system.

SIG has been at the forefront of these top five lists for the past few years, whether its optics, rifles, or pistols. In this case, SIG has introduced a factory-ready-to-suppress MCX pistol.

Other than the suppressor and SBR, which you will have to wait for like everyone else, this rifle is ready to attach a can and shoot silent. If you are looking at the muzzle device and scratching your head, the CaneBrake is shipped with an inert training device that mimics the size and weight of a SIGSRD762 suppressor. The inert muzzle device works to protect the shooters hand from any muzzle flash so the firearm can be used while you wait for the ATF to free your suppressor from NFA-jail.

With the CaneBrake all the owner needs to do is wait for the ATF to process their paperwork and they will be ready to shoot the Rattler in its intended 5.5″ suppressed configuration. SIG Sauer has provided a complete package for anyone wishing to two-stamp a SIG MCX Rattler, and that is awesome!

Back by consumer demand, LWRCI has introduced the R.E.P.R. MKII-SC and it looks amazing! Fitted in this image with an 18” PROOF Research carbon fiber barrel, Magpul PRS stock, and a Geissele two-stage trigger. There were multiple other configurations, including a short barreled variant and others available in 6.5 Creedmoor.

Having a side charging handle will make for much easier manipulation of this rifle from prone and benchrest positions, and is ideal for this type of rifle. LWRCI has delivered a complete semi-automatic rifle for long range shooting, not sure much else needs to be said other than, I want.

Claiming the number five spot, because it was so awesome and yet so upsetting at the same time. Available for law enforcement first, and eventually for civilians once production and back stock are created, the Geissele Super Duty LE rifle line.

This is actually one thing I think will excite every AR-15 enthusiast out there: full Geissele AR-15s.

But with that excitement there is a catch. These rifles will not be available to civilian markets for at least the next year. When speaking to Bill Geissele at Industry Day at the Range, his explanation made perfect sense and it did lessen the blow of disappointment that unless I decide to don a badge this rifle will have to wait. The short story is the Super Duty line will be fully customizable, from barrel length, to parts kits, to trigger, and cerakote finish. These rifles will be speced to the specific law enforcement units and eventually down to the individual consumers wants and needs, which sounds like everything we could ask for from the AR-parts king that is Geissele.

So Geissele will run machines non-stop building receivers, barrels, and parts; assembling these custom dream rifles. They will receive feedback from real-world use from law enforcement and they will refine the product for us peasants, I mean civilians. 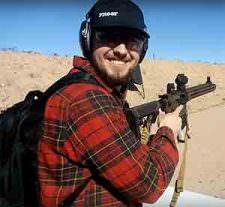 A firearm is as only as good as the person shooting it. Buying all the fancy add ons does not make one a great shooter. I learned more starting out with a Daisy BB gun and going on to a .22 long rifle. You can get excellent results hip shooting a BB gun from the hip if you practice. If you ever have to walk point this exercise could save your life.

Whoa there, all you drooling riflemen, remember, you’re going to need a rather mundane handgun (which you’ll some skill with) in order to fight your way to the latest ” tacticool ” iteration of the AR. Think about it.

Everything new is plastic and looks like a toy. What happened to beautiful wood and fantastically engraved rifles and shotguns.

All banned in Connecticut for private ownership.

That’s a typical liberal state…but I bet they allow illegals there!!!

Well at least until someone gets tired of the the left wing ‘grab-everyone’s-guns-and-then-we-can-do-as-we-damned-well-please-because-you-don’t-need-any-damned guns’, and takes them to the Supreme Court for a reality check.
Not grammatically correct but you get the picture.

Why waste time and money on these TRAITORS. Send them to a military tribunal like Trump is doung with others. Anybody seen G.W. around lately ? How about CIA Brennan ? And do you think Daddy Bush died a natural death ? LOL ! And Traitor McCain ? Ha! They say G.W. ratted on everyone, even his old man. He just folded after the first water board. Now OBummer has been pleading for his life. Fat chance !

Well, it is the fault of the people in Connecticut for putting these idiots in office.

Guess you missed the 6 pound P.O.F Revolation 308/6.5 Creedmoor carbine on the M4 frame

You’d think AR pattern guns are the only “new” guns. There must be a YUGE amount of mall Ninja money out there just itching to be spent on the latest “tactical” whatchamacallits.

LE’s are civilians too.

They tend to forget that though….

Nope. Not any more. When tyranny comes, who will be the foot soldiers? Just ask Gary J. Willis of Maryland. Any officer enforcing Red Flag laws is in direct violation of the Constitution.

Does that make them a POS OathBreaking TRAITOR, or just a low IQ brainwashed moron more interested in their pension than honoring the oath they took ? These are the guys who are supposed to follow the law and disregard illegal unconstitutional laws. The US Constitution is the SUPREME LAW OF THE LAND, lest they forget. And forget they do, and because of those types this Republic will be lost. As for the authors of these unconstitutional laws, Trump has set a precedent with the Military Tribunals that are now secretly going on.

The Browning 180 is priced to sell, unlike I suspect the Giessele. Leo’s would be better served by the Browning.

Wayne B. Conelly
Reply to  Charlie

it’s not a Browning. it’s a brownells.

The price on the Browning 180 is great. If it is accurate it will be a winner!

The BRN-180 upper needs to come in a 10” barrel configuration for a pistol/brace lower.