U.S.A. –-(Ammoland.com)-Shane Owens has been called the savior of traditional Country music by the likes of Randy Travis, John Anderson, and Allan Jackson.

In an era of pop-country, Owens has kept to the roots of traditional country music. Not only in his sound, but also in the way he came up through the ranks. When musicians are getting discovered on YouTube and Soundcloud, Owens took the hard route and built his fan base by playing honky-tonks.

With hit singles such as “Love to Try Them On” he has made a massive splash in Nashville playing on stage at the Grand Ole Opry in front of a packed house. Country music superstar, Randy Travis produced Owens records, and he has broken into the top 40 charts.

Owens hasn’t let this fame go to his head. He is still strong in his faith in God and his love of his family. He still loves to hunt and fish with his kids while passing on Americans values and teaching them the importance of the Second Amendment.

I sat down with Owens to talk about, music, faith, family, and guns.

John: I’ve been listening to your music. I really dig it

Shane: Thank you so much. We really have been blessed, man.

John: How did you discover music?

Shane: My grandmother played the piano in a Baptist church growing up, so I was always around music. She was one of my biggest influences, but I still just grew up loving traditional country music: The Jones, the Haggards, Alan Jackson, George Strait, Randy Travis. The list goes on and on.

John: What is your biggest challenge in music?

Shane: There is so much talent out there in Nashville; it is just staying on the charts. My Current single, “Love to Try Them On,” is in the top 40 as we speak this week. It’s just keeping your head about the waters since there is so much talent out there. I am glad to be in the mix. It is writing the best the songs you write and record and having a little luck. You got to be lucky.

John: With all the new ways of approaching a music career today like YouTube and Soundcloud, you have come up the old school way by playing honky-tonks. Why did you choose this path?

Shane: I think some of the young artists don’t have the opportunity to grow up getting that exposure in front of people, learning to work a crowd. The exposure and experience are priceless.

A lot of these younger kids get signed and haven’t really been groomed. They haven’t really been in front of many people. They got to go through a developmental thing, and it takes two or three years. I got that underneath my belt early, and I came up the hard way, the traditional way and I wouldn’t change any way that it happened to me.

John: Your sound is a throwback to the songs of Merle Haggard and George Jones. Is it essential for you to have this original sound?

Shane: It most differently is. There is not but a handful of people out there playing what I call “traditional country music.” Country has kind of crossed over to “popish country” and stuff like that, but like I said my influence is Randy Travis which I have been honored to work with and call a friend, he produced my last record.

You know, I just don’t try to get outside my realm. I just do what the good lord blessed me to do. He gave me a traditional country music voice, and I will always stay true to my roots.

John: How was it to play the Grand Ole Opry?

Shane: Oh man, we got to play it twice. It was a dream come true. I tell everybody if I never sell a million records, I can say I played the Grand Ole Opry. It is the church of country music, and everybody dreams of playing the Opry. We’re going to be soon doing our third trip on the Opry.

So, it’s an awesome feeling. It is one of those things that comes along once in a lifetime, and to get an invite back is something pretty special.

John: You tour a lot. How was it to go from Alabama and growing up in the typical American family to being on the road so much?

Shane: I’ve been blessed with a great family. I got a lot of support at home. I got a wife and two boys, and they are always encouraging me to go out there and be the best I can be, and that is a help.

It is great to have that family support and the support of so many fans out there that love country music. Also, fans in the industry that are willing just to push my music and get me out there and get me as much exposure as I can get, and people like you that take the time out to do stuff like this right here really helps us out.

John: I can tell that faith and family are important to you. Is it hard to keep that balance on the road?

Shane: It’s like I said a while ago, I always had a great family that had faith in me. They rely on me. So, I got to get out there and be in the best shape I can be in and be always positive.

In this business, you can be on the charts Monday and Friday be off of them. I take advantage of every opportunity we have before us and make the best of it.

John: When did you first start hunting?

Shane: We harvest quite a bit of deer. We got over 315 acres down here on the river in Alabama. We kill some pretty big bucks. I harvested my first deer when I was six years old. 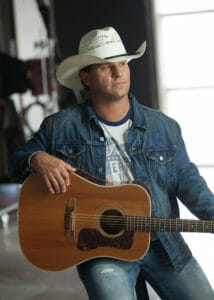 John: Oh, wow that is young.

John: Why is it important to teach the next generation to hunt?

Shane: I always have been a great fan of hunting and fishing, and my paw-paw and my daddy were avid hunters and fishers. We live hunting. We just don’t shoot deer. We harvest everything we take. We process our own meat and our own hamburger, and our own sausage. We take it pretty seriously.

That is what we consume. We probably haven’t bought a pack of hamburger meat from the grocery store in 25 years.

Shane: Well you know, deer meat is high in protein. It is a lot better than the stuff you get at the grocery store. I am not knocking them, but it’s a lot less grease, it is more healthy, it is lean, you are not getting as much fat in the meat.

John: Why is the Second Amendment vital to you?

Shane: I believe we should have that freedom. I believe in the freedom to bear arms. We live in a world today that sadly, but it true, that you never know nowadays.

It makes me sad to think about it. It makes me sad to watch the news and see what happens to people that get a hold of guns that shouldn’t have them. No law is going to prevent that. As a citizen of the United States and the human race, we should have the right [to bear arms], and I have always believed in that. You got to be able to protect yourself nowadays.

It is sad to think about how the world is and all the meanness and hatred out there, but you got to be able to protect yourself as well.

John: If you could only have one gun what would it be?

Shane: It would be a Remington 14 karat gold trigger .243 that my granddaddy gave to me when I was eight years old.

John: Wow. That is a nice rifle.

Shane: I had that rifle since I was eight years old, and I think I have killed 24 deer with it. It still looks the same as the day he gave it to me because every time I hunt with it, I wipe it down.

John: Is there anything coming out that our readers should be on the lookout for in the future?

Shane: They can always go to shaneowenscountry.com. The brand-new single is doing well. We are going to jump back in the studios in a couple of months and record a brand-new album. There are always the dates that are coming up on the calendar. You can go to shaneowenscountry.com, the website, Facebook. All the social media site. You just go to the website and click on [the link].

We are just here on the road and having a great time making traditional country music. We love our fans, our friends, and our families. We are just keeping it country.

Readers can find out more about Shane Owens at his website located at www.shaneowenscountry.com

John is a NRA instructor and a constitutional activist. He is the former CEO of Veritas Firearms, LLC and is the co-host of The Patriot-News Podcast which can be found at www.blogtalkradio.com/patriotnews. John has written extensively on the patriot movement including 3%’ers, Oath Keepers, and Militias. In addition to the Patriot movement, John has written about firearms, interviewed people of all walks of life, and on the Constitution. John lives in Northern Virginia with his wife and sons and is currently working on a book on leftist deplatforming methods and can be followed on Twitter at @crumpyss, on Facebook at realjohncrump, or at www.crumpy.com.

Nice to have Shane on our side. It is good to see that not all who are in the public eye become infested with Hollywood type values.