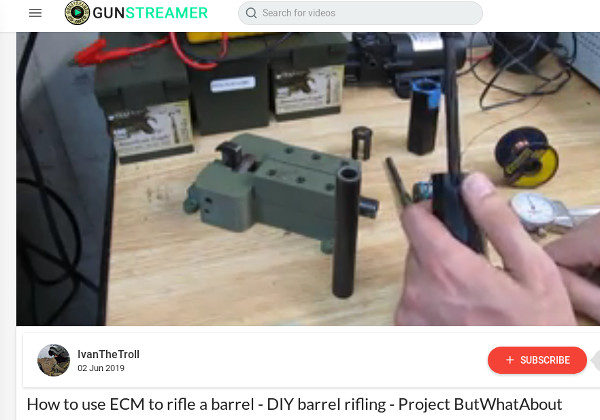 Arizona -(Ammoland.com)- I have long suggested practical homemade guns of the future will only use 3D printing as part of the process. They will be hybrid designs using the strengths of 3D printing and simple metal components to produce practical firearms in the home or in small, unregulated shops.

A prominent experimenter of homemade and small shop technology for crafting usable guns, Ivan the Troll (Internet screen name) claims to have made a breakthrough in home manufacture of rifled barrels. Ivan is part of, and often the spokesperson for, the Deterrence Dispensed project.

Rifling a barrel has been done for hundreds of years in small shops. It has been done by individuals over the entire period. It is not hard to do in mild steel. But it takes time, effort, a little skill and some homemade tooling that also takes some effort and skill to produce.  Most current homemade and small shop guns either use mass manufactured barrels (there are hundreds of millions in existence) or use a barrel without rifling.

In the United States, rifled barrels make a legal difference.

If the barrel is rifled, a gun meant to be shot one-handed is officially a pistol. If it is smooth bored and meant to be shot one-handed, and over 26 inches long overall, it is a firearm. If it is smooth bored and was originally manufactured to be fired from the shoulder, is less than 26 inches long, or has a barrel that is less than 18 inches long, it is classified as a short-barreled shotgun, and requires an application, interminable months or year-long waits for permission to manufacture, and a $200 tax stamp. Short barreled shotguns have been exempted from protection under the Second Amendment, by the courts. While the law is antiquated and of dubious value, it is still the law.

If you wish to experiment with making your own pistols legally, they need to have a rifled bore or the National Firearms Act (NFA) paperwork and tax stamp, to comply with United States law. An alternative is to make muzzleloading guns, which do not require a U.S. tax stamp or a rifled barrel because they are excluded from the NFA.

3D printed guns, when made of plastic, do not have effective rifling. The rifling printed in plastic barrels is to meet legal requirements, not to stabilize a bullet.  Obtaining a mass-manufactured rifled barrel in the United States is easy.  They are legally for sale through the mail or over the counter and do not require any license or background check.

Some reasons to make your own rifled barrel are; for experimental purposes, proof of concept, pride in craftsmanship, or political reasons. What Ivan the Troll has done fulfills all those purposes. One character in the expletive in the following quote was altered.  From project ButWhatAbout:

On a quest to make a gun using zero legally defined gun parts with EU laws as a benchmark, Project ButWhatAbout is a 21st-century realization of the Luty SMG. Using modern manufacturing methods like 3D-printing and ECM, the efforts of Project ButWhatAbout have culminated in what is now known as the FGC-9 (F*ck Gun Control). Currently being developed by members of Deterrence Dispensed, the FGC-9 is a 9x19mm firearm based on the Shuty AP-9 by FOSSCAD contributor “derwood”. The FGC-9 uses Glock magazines, and unlike the AP-9 which uses a store-bought Glock barrel, the FGC-9 uses a homemade ECM barrel.

Ivan the troll has produced and tested a 9mm barrel, using commercially available thick-walled steel tube. He bored the tube to the desired dimension for a 9mm cartridge. He rifled it and chambered it. He pioneered doing those things with homemade Electro-Chemical Machining (ECM) apparatus. The apparatus parts cost less than $100. The apparatus is simple to assemble from commonly available products and is easily understood. Machining the bore, rifling and chamber took about two hours. The material cost was a few dollars.

Ivan built a firing fixture to test the barrel. He says he fired over 30 rounds through the barrel with no visible wear, nor does he expect unreasonably or exceptionally fast wear. The steel tube was chosen, in part, for its strength. The ECM process works well with hard, tough materials, as long as they conduct electricity.

The purpose of a rifled barrel is to stabilize projectiles for accuracy. Ivan says he achieved 3-inch groups at 25 yards, using his test fixture and commercial ammunition. An ordinary Glock pistol will often achieve 2.5-inch groups at 25 yards. It is practical accuracy, better than most people can shoot a pistol.

Once the ECM tooling is made, there is almost no wear, as there is no physical contact between the tooling and the workpiece. The steel tube used to produce the barrel is cut to the desired length with traditional methods. After cutting, making additional barrels will consist of a simple setup, and turning on a couple of switches. The three steps take about two hours, according to Ivan. Most of the time is waiting for a process to be completed and switching out tools. The time spent waiting can be used in reading, watching a video, or other pursuits. A timer could be used to stop the process instead of watching the clock.

The tooling Ivan used for the ECM  was partly produced with a 3D printer. Looking at his video, it does not seem necessary to have a 3D printer to make effective tooling. It could be done with simple hand tools, with a similar time expenditure. ECM tools have almost no wear. Hundreds of barrels could be produced with one tool, perhaps thousands.

I suspect, with experimentation, the three steps could be combined into one, using one tool that would produce a chambered, rifled bore, from a suitable metal tube, in about an hour.  The tools themselves could be mass-produced, and sold cheaply. There is no law against this; such a law would be similar to outlawing drill bits or chamber reamers.

The barrel produced by Ivan is 4.5 inches long. Producing bores five times as long would present challenges with tool rigidity and placement. I suspect 9 mm bores to 10 inches could be produced with little effort.

Bores of .22 caliber would present challenges if over 10 inches long, in my opinion.

All that Ivan the Troll has done with ECM could be done and has been done, with conventional tools and tooling.  It is still easier to purchase a manufactured barrel than to make one yourself.

The exercise shows a person does not need exceptional skill or training to make their rifled barrels at home. No machine shop is required. Little room is needed.  The process does not produce excessive noise. The process is virtually untraceable and unregulated.

Ivan has shown, as they say, you cannot stop the signal.

For what it’s worth – I didn’t really pioneer DIY ECM of barrels. Jeffrod had done similar work a few years ago. What I did was apply the concept to 9mm, and am working to standardize the process.

Is there any way to download the videos and keep them backed up. As crazy as everything is now with sites getting taken down or thier ddos protections getting removed it might be a good idea to put them where they can be downloaded and kept safe on peoples hard drives.

Videos would be more useful if they were CAPTIONED. There are those of us in viewerland who can’t hear worth spit.

How much longer before the tyrant control/subjugation freaks realise this FACT:

the “genie” is truly out of the bottle, and will NEVER be stuffed back in.