U.S.A. –-(AmmoLand.com)- Since filing for bankruptcy back in 2018 gun nerds around the Country, no scratch that around the World, have been waiting with bated breath to find out exactly what happens next with mega firearms manufacturer Remington Arms. Founded in Upstate New York in 1816 by Eliphalet Remington under the name E. Remington and Sons. In over 200 years the company grew into one of the most recognized names in the industry and a literal Behemoth after it was absorbed into the Freedom Group (a subsidiary of the Cerberus Capital Management a 40 Billion Dollar Private Equity Firm ) in 2007, which also owns highly recognizable Firearms names like Bushmaster, DPMS and Marlin. So big is the Remington name that The Freedom Group renamed the conglomerate into Remington Outdoor Company in 2015.

Things sort of went downhill fast in recent years, and we can blame that on a combination of over 900 Million dollars of debt, anti-second amendment politics, activist investors, and lawyers seeking big paydays by suing firearms manufacturers for the cowardly actions of evil-doers intent on mass murder. So even in times of high uncertainty and record-breaking gun sales in America, Remington found itself filling bankruptcy for a second time and finally an auction was ordered by the courts. For the last few weeks, lots of rumors have been swirling in the Industry, from one big Investment group buying the whole thing to the Ammo holdings been sold off to one party and the rest to another.

Today I stumbled across the Court Documents online (I’ll include a link and a picture here) from the bankruptcy court speaking to who exactly were the winning bidders and what part of Remington they won! 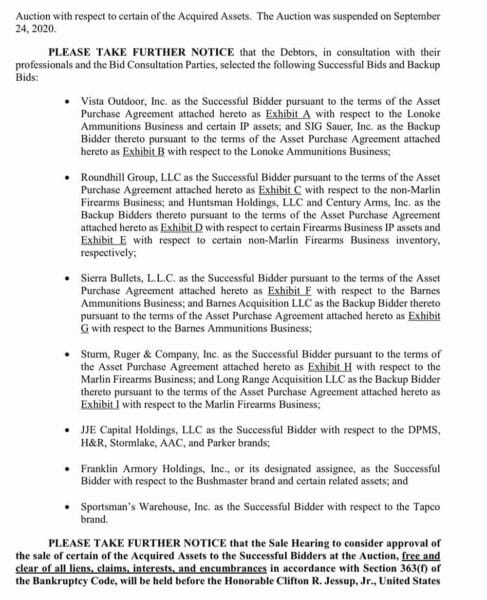 I also made a quick video for the YouTubes that we’ll share here as well as my thoughts on who’s these different groups are among the winning bidders.

I hope you guys will take the time to check out my video and leave your thoughts on all these developments, it definitely seems as 2020 is showing no signs of slowing down.

Hank Strange is an Enthusiastic Supporter of The Second Amendment, An Avid Filmmaker, Writer, Blogger, Music Producer, and Digital Artist: Hank is a Prolific YouTube Content Creator having Published over 1000 Videos to date relating to Lifestyle in the realms of Firearms, Cars, and Technology. A Proud American Citizen Since 2003 Hank was born of Mixed Race Parentage (his Father having African Ancestry and his Mother being of East Indian Ancestry amongst others) in Guyana, South America. He has traveled to a few places in the world with his Family living in London, England, and Nigeria in West Africa before settling in NYC. Hank & His Wife Lola are both Federal Firearms Licensees and currently live and work in Florida. Passionately Pursuing The Lifestyles Of The Locked And Loaded! Tune in to the daily Gun Culture News “Podshow” Who Moved my Freedom Podcast (WMMF) on the LIfestyles of the Locked and Loaded youtube channel. Hank’s work can also be seen on www.youtube.com/user/hankstrange/featured, Facebook www.facebook.com/hank.strange.77, Instagram instagram.com/hankstrange, his Personal Blog hankstrange.com, and other Social Media.

It will be interesting to see the details of each of the bids. Did Ruger get anything more than IP related to Marlin? I.E. Name, CAD/CAM files, etc. Does it included the machine tools. Does it include real estate like the Ilion NY factory where Marlin rifles are made? If the real estate isn’t included Marlin production will be interrupted for the time it takes to setup production in another facility. Ruger could lease space in Ilion for some time to buildup inventory of rifles sufficient to cover anticipated sales during the expected production downtime.

Now who owns the the “Remington” name and trademark? Will Vista Outdoor and Roundhill Group be sharing the trademarks associated with the Remington name? What’s included in the IP assets Vista won, sole use of the Remington brand?

Thank God all of the companies mentioned are not owned by bloombutt Aka bloomburg or sorebutt Aka soros..

Does anyone get the Remington brand name or is the rifle still going to be made by the reorganized co?

Great work. Keep it up. I , for one, am holding my chips for the NYC bankruptcy. Here is my opening bid on Battery Park: 87.50 (MX Pesos)

Awesome report. I like you style. New to you and now subscribed.

So, do Remington branded firearms fall under the “Non-Marlin Firearms Business” category? As long as there continue to be replacement parts as needed for various Remington firearms, I should be good. I don’t own any of the other brands of firearms that were in the Remington family (yet).

The only ting mentioned that destroyed Remington was a untenable amount of debt, combines with a Holdings group that is excellent at vulture Capitalism.

It is good to see Ruger pick up Marlin that tells me they are committed to the cowboy side of things. Now if they would only make a PCC in 45ACP with a 1911 mag adapter I would be happy

The real question is why would anyone favor a 9mm over the .45

they are both useful tools, though not interchangeable. I have 3/8 drive ratchets, and 1/2 inch drive ratchets, and a 3/4 drive one as well. I can use the 3/4 with reducers on the 8mm socket, but its pretty funny when I try and use the 3/8 drive ratchet to remove the Budd nuts on a Kenworth. Even on the 3/4 drive I sometimes have to get out the seven foot piece of two inch steampipe as a “cheater”. I own handguns in nine and forty five, and a few things in between. Heck I even own handguns in the… Read more »

and my bet is that is precisely what Ruger have in view by taking up that line. And Henry SHOULD be “on high alert”. Ruger are no fools. I can imagine a Ruger remake of the venerable 30/.30 lever guns. Perhaps a variant with. a removeable box mag. With a twenty round option. I’d buy one.. maybe chambered in something a little “hotter”.. but I suspect,, after the .30/06, the 30/.30 has taken the next highest number of deer compared to anything else. And probably ore coyotes. Maybe in .243,,,,,,,, now THAT would be a fine tool to own.

Century arms is an importer of AK variants I believe.

Papa Bush’s EO means that firearms imported into the US have a sporting purpose. The ATF doesn’t recognize that 3 Gun is a sport. Therefore only parts kits of AK’s, FAL, HK-91’s, CETME’s etc can be imported. The parts kit must be combined with a few US mfg’d parts from the ATF’s list. The EO is the reason pre EO AK, FAL, HK-91, etc. are worth 2+ times a US mfg clone.