U.S.A. -(AmmoLand.com)- With all the speculation and the ruling party of Democrats seeing bloodlust towards stripping gun owners of their rights these days, the ammo shortage we’ve been seeing not only shows any signs of letting up, but there’s the likelihood that it’s going to get worse. The local gun shops I visit, usually a couple of times a week have next to nothing, and when some ammunition does trickle in, a few boxes at a time, within a couple of days it’s all gone again. I’ve been in one shop after another when someone comes in and asks for this caliber or that, only to leave disappointed because what they seek is as hard to come by as it is to change lead to gold.

As someone who collects and shoots what many would consider an obsolete caliber (as long as they can do the job, they’re far from obsolete I find), it’s been my experience that sometimes it’s best to find an alternative to what is trendy or popular and not just during an ammo shortage. Can’t find that 6.5 Creedmoor? Well, what about 6.5 x 55mm Swedish Mauser? I tend to see boxes of that on the shelves these days, and ballistically speaking, the two calibers are so close to each other, that if you were to hunt whitetail deer, the deer sure wouldn’t know the difference.

What about milsurp rounds during an ammo shortage? Can’t find 7mm-08, how about 7 x 57mm Mauser? It’s one of the best hunting and military bolt action rounds you can ask for and again, I seem to see a lot of it lying around, there doesn’t seem to be a lot of interest. I can tell you that right now since it doesn’t look like our ammunition crisis will be solved anytime in the near or even the foreseeable future everyone needs to start thinking outside of the box.

Right now, as many shooters know, .22 Long Rifle has got to be one of the hardest if not the hardest caliber to get your hands on, at least in any great numbers. So instead of trying to track down non-existent ammunition, or spending your kid’s college fund online paying outrageously high prices, I can tell you there are some alternatives out there.

A couple of months ago, I ran across a gun that before last year and the ammo shortage that came along with it, I wouldn’t have even given a second thought. It is an H & R Sportster single shot in .17 Mach 2. The .17 Mach 2 caliber has had a bit of a rough life since it was introduced in 2004, mainly since it seems that most can’t figure out what the round should be used for. The .17 Mach 2 was a .22 LR Stinger case necked down to take a .17 round that weighs 17 grains and gets an advertised velocity of 2,100 fps from a 24-inch barrel. Some have criticized it as being a round without a home, too small for most varmints, and too much on game like squirrels unless, by way of a head shot, it’s been deemed more of a specialist’s gun, but whatever you call it, it’s a lot easier to come by in most places right now than .22 Long Rifle ammunition.

After taking my .17 Mach 2 to the range, I found that it quickly at 50 yards proved to be very accurate, and that was shooting it off the Caldwell bipod, not even off a bench. The trigger on the H & R Sportster isn’t exactly as smooth as I would like it to be, but it’s pretty good for what you’re getting. I can say that as long as the shooter does their part, putting in a headshot on a squirrel and a woodchuck within reason is certainly going to do the job. 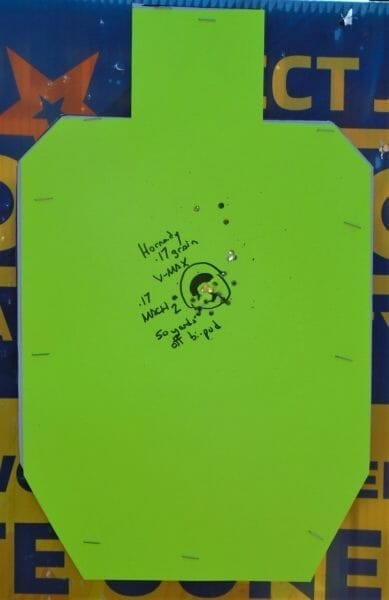 But what if you do have your heart set on a .22 Long Rifle during a 22 ammo shortage, but can’t find a Ruger 10/22 or one of those other semi-auto rifles right now because they’re in demand. Might I recommend one of the best semi-auto .22’s ever conceived of, designed by the legendary John Browning, the Browning SA-22, or Remington Model 24.

Designed in 1914 the Browning SA-22 was first made in Belgium and was also the first-ever semi-automatic in .22 Long Rifle. The gun loads from a tube magazine in the buttstock and holds eleven rounds and sixteen when chambered in .22 Short, and ejects from the bottom, making it great for both left- or right-hand shooters. The Browning version is still in production to this day, although after 1973 the guns started to be made in Japan by Miroku. The Remington Model 24, essentially an identical copy except that the earliest Browning versions had the loading port on the top of the buttstock which was later moved to the right side.

The Remington 24 was first introduced in 1922 and like the Browning, it came in both .22 LR and .22 Short although you cannot shoot both out of the same gun. It didn’t enjoy the long life the Browning SA-22 has and was only produced until 1935 and Remington brought out the Model 241 which was a larger version of the Model 24. Again, you can get the gun in either .22 Long Rifle or .22 Short. The Model 241 was discontinued in 1951.

I picked up a Remington Model 24 not that long ago, it was sitting on the shelf at the local gun shop for several months, and the shop owners had even recommended it to a couple of people when they couldn’t get another semi-auto .22 that they wanted. The big turn-off was the tubular magazine in the buttstock. Even the Remington rifle’s ability to be taken down easily wasn’t enough to sell it. So, away it went. I see Remington 24’s and 241’s online quite often without anyone paying much attention to them.

I went to the range with a box of Eley .22 LR ammo and found that the Remington 24’s reputation for reliability and accuracy is well deserved. Every round cycled and ejected perfectly and at 30 yards with just a simple cardboard silhouette an entire magazine full grouped in a couple of inches with the open sights. The trigger is excellent and the Model 24 weighs a whopping five pounds. When taken down the Model 24 can fit into a small bag or gun case and makes a great little rifle for camping or hunting.

With the shortage of ammunition and guns right now showing no signs of slowing down and with any pending legislation from Washington likely to spur on more panic buying and with-it price gouging and all the headaches that come with it, you need to think outside of the box for the time being. Don’t be constrained by what guns are the most popular right now, others can do the same job, you might never have heard of them before. If when you are at the gun shop trying to find ammo for the gun you have, but instead see a stack of ammunition that never disappears, look into that caliber and see if it fits your needs. Just like guns, some calibers can do the same job as those that are popular, they just might not be the most common or even “trendy” right now. Don’t pass them up simply because you’re not familiar with them. In tough times, you have to change your thinking to adapt so that you don’t get left with an empty safe or without a gun entirely.

David LaPell has been a Corrections Officer with the local Sheriff’s Department for thirteen years. A collector of antique and vintage firearms for over twenty years and an avid hunter. David has been writing articles about firearms, hunting, and western history for ten years. In addition to having a passion for vintage guns, he is also a fan of old trucks and has written articles on those as well.

I learned from the Sandy Hook gun & ammo shortage to up my ammo & component min. inventory quantities. Even though I have enough loaded ammo of all the calibers to cover at least 18 moths of shooting I have angst that I will run out before online & LGS supplies return to the old normal.

Well I’m glad the author found a dusty box of cartridges and just happened to find a rifle that chambered for his “find,” but the reality I’m seeing in my area is that there’s not a damn thing on the shelves, period. Plenty of guns, but nothing for ammo. People are hoarding, prices aren’t driven by supply and demand, prices are sheer USURY right now. .22 LR at $0.25/ round, and it’s going to get worse. I haven’t seen a box of Primers, since last summer, neither have the owners of the 3 LGS’s I frequent. I’ve lived through shortages… Read more »

Well I thought it was a joke that I was s making: See ammo and buy the gun for it. Along with HIGH gas prices old joe is putting it on us.

when 22 went from .1/4 cent to half cent per round bought a pallet paid just over a 1/4 cent still shooting from that have about 20,000 left keep it cool and dry lasts forever

The ammunition situation won’t normalize until we get a Republican, pro 2A administration in the White House.

I inherited a 17 last year and bought several boxes for it on sale for $10 a box. The little stainless Savage has dispatched couple of skunks and handful of squirrels.
I’m with Mac, where’s the ammo? A walk through a local store that usually has the largest supply in the state only has a couple boxes of shotgun shells. Gave a box of CC I 22 to my small engine mechanic for his advise making both of us happy.

My neighbor to the south of me is a hobby woodworker. My wife had a 17″ long and 1&1/2″ wide piece of wood that she needed a 5/8″ wide strip cut from it lengthwise. He made the cut and brought me the pieces. I asked him if he had any handguns and he said he had a 9mm. I gave him 100 rounds of 147gr plated FP for his trouble. It is nice to be “ammo rich.”

So who has seen 17 on the shelves? There is NOTHING which means NOTHING!

For those of us who learned from prior Ammo Apocalypses. Being the “Ant” instead of the “Grasshopper” in good times and bad saves you from the hardships of Need. Even IF things get better at some point they’ll Go To Hell again. So learn from this and be prepared for All Things in the future.

Had my father-in-laws Remington speedmaster for a while. Nice little semiauto that works with any of 22lr, 22 long or 22 short without any adjustment.

This “article” is one of the best jokes posted in quite a while. Get REAL!

Forgot to add I have a .22 rifle also so don’t need anything smaller…

Yeah, I couldn’t see the point when it came out either. For all the hoopla that was made over it. Rarely ever saw more than a box or two of .17 on the shelves before this latest shortage started. That tells me it never took off in my neck of the woods. I RSO and volunteer clean at our local range. We collect the brass to help offset running our youth shooting program. I don’t recall ever seeing any .17 in the brass we gather in the 10 years I’ve been helping out. Maybe it was the Bee’s knees in… Read more »