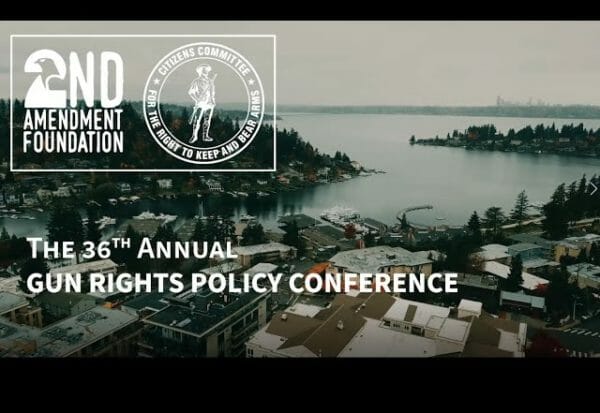 New Jersey – -(AmmoLand.com)- This last weekend the 2021 Second Amendment Foundation‘s (SAF) virtual Gun Rights Policy Conference (GRPC) premiered. Due to the pandemic, the SAF was forced to have both the 2020 and 2021 GRPCs virtually. With the ability to organize the conference in this manner, the SAF delivered two day’s worth of quality programming, gun rights news, legislative updates, guidance on advocacy, and more.

Broken up into five different video segments, embedded in order below, the following topics were covered by the invited speakers:

Between the five videos, which can be viewed on the following playlist, there is nearly nine and a half hours of content and just taking a look at the preliminary numbers from YouTube and Face Book, the posted content has already been viewed over 15,000 times.

Noticeably present in this year’s GRPC, as has been in the past, were several guest presenters representing New Jersey. The work of these individuals, what they do with the organizations they represent, and their dedication to Second Amendment preservation needs to be saluted. New Jersey is one of the final strongholds that continually usurp civil rights, having such involvement from Garden State advocates on this national level is key.

Tony Simon from The 2nd is For Everyone(2A4E): Diversity Shoot, talked about his advocacy work in New Jersey. Simon discussed what moved him to get involved and through his story, we can all learn about ways we can positively impact the Second Amendment.

Alexander Roubian from New Jersey Second Amendment Society (NJ2AS) spoke on behalf of the NJ2AS membership. Roubian gave a rundown on some of the challenges that NJ2AS has continued to face while trying to stave off bad policy and law from further encroaching in the Garden State. Roubian also discussed the problems NJ2AS was confronted with in dealing with the Murphy administration in 2020 and being thrown out of press conferences, chilling Roubian’s First Amendment rights.

It’s a point of pride to be able to view the 2021 GRPC and see so many of the great movers and shakers from both my native New Jersey, as well as advocates from all over the country. New Jersey was very well represented and shows the importance of continual hard work in problem child states.

The 2021 Gun Rights Policy Conference by all accounts was a huge success and I urge those of you who have not tuned in to take a look at some of the important content:

John Petrolino is a US Merchant Marine Officer, writer, author of Decoding Firearms: An Easy to Read Guide on General Gun Safety & Use and NRA certified pistol, rifle, and shotgun instructor living under and working to change New Jersey’s draconian and unconstitutional gun laws. You can find him on the web at www.johnpetrolino.com on twitter at @johnpetrolino and on instagram @jpetrolinoiii .

Ammoland, please remove the damn prompt wanting me to accept all cookies. Your site worked fine before this annoyance and I do not wish to “accept” it. No reason you cannot put an “X” in the corner to make this go away.

Last edited 11 months ago by Grigori
1

Anxious for these meetings to return to in-person format. Miss the interaction with like minded persons from around the country. Have attended for over 10 years…one of my anticipated road trips annually. Just cannot sit in front of a computer or TV screen for hours in the remote format.