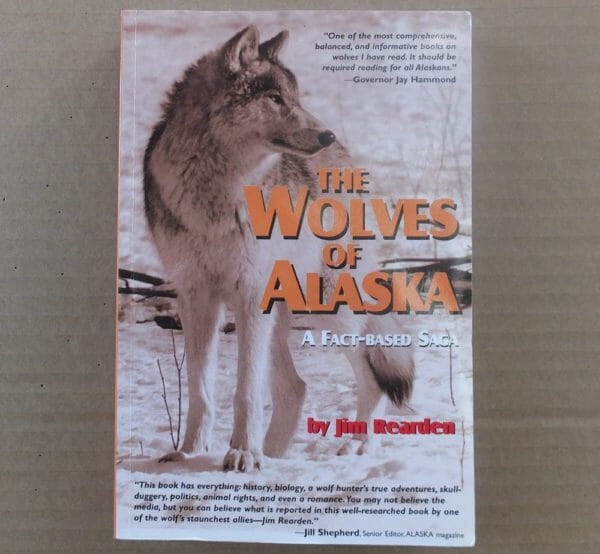 U.S.A. –-(AmmoLand.com)-— The Wolves of Alaska A Fact-based Saga, by Jim Rearden, 335 pages, published 2002, Pictoral Histories Publishing Company, Missoula, Montana. Prices vary from under $20 new, to under $10 used, or about $3 on Kindle.

The Wolves of Alaska: A Fact-based Saga

The Wolves of Alaska (Wolves) is a comprehensive, deep dive into wolf habits, management, and the politics of such management in Alaska.  It is written in an easy-to-read format, a “faction,” a saga based on fact, with fictionalized names to protect the innocent and give the guilty no action for a lawfare lawsuit.

It is a fine antidote to the misinformation perpetrated on the world with “Never Cry Wolf” by Farley Mowat.

Reardon was a legendary Alaska professor, guide, author, writer, scientist, and civic-minded volunteer. He had a lifetime of experience, 46 years, in Alaska when Wolves of Alaska was finished, about 1996. It would be six more years before it was published in 2002.

Wolves of Alaska relies on the best research, real-world experience, and information gleaned from several lifetimes in Alaska dealing with wolves.

Rearden had already written several books and interviewed people with a lifetime of study of wolves. While wolves are perhaps the most important characters in the book, a host of real and composite characters, made from the real lives of men and women, come to life in the book’s pages. A favorite is Frank Glaser. Reardon devoted an entire book to Frank, several years earlier. Frank was a legendary hunter and trapper in Alaska.

Rearden was an early and perhaps the main proponent of ending the bounty on wolves, which had been with the state for most of the time since Alaska was purchased from Russia. The state eliminated the bounty in 1970.

Reading the book, you may be surprised to find somewhere between 20 and 40 percent of a wolf population has to die each year to maintain a stable population level.

You will find that wolves and bears are responsible for about 85% of the mortality in ungulate (caribou, deer, sheep, and moose and muskox) populations in Alaska. Hunters only account for 2-7 percent. Most of the mortality is in young animals.

Wolves of Alaska has an abundance of facts you can rely on. In addition, it is a good read. It kept my attention and interest. At times, it is a page-turner.  It is an interesting way to both tell a story and deliver hard facts to an interested population. The facts would make a textbook proud. The presentation reads like a good novel.

Wolves of Alaska goes to considerable length to explain the dynamic where misinformed urban dwellers, particularly professional women without children, become emotionally attached to a romantic image of wolves promoted by radical environmental and animal rights groups. Not so coincidentally, such an emotional attachment is financially rewarding to the groups promoting the false image of wolves.

One complaint: when Wolves of Alaska was written, the myth of the “harmless” wolf had yet to be broken. The book was published in 2002, three years before Kenton Carniegie was killed by healthy wild wolves in 2005 or Candice Berner in Alaska in 2010.

Now we know: that healthy wolves often kill people under the right conditions. Those conditions do not exist where people commonly carry modern firearms and are allowed to shoot wolves that become too bold.

Dean Weingarten has been a peace officer, a military officer, was on the University of Wisconsin Pistol Team for four years, and was first certified to teach firearms safety in 1973. He taught the Arizona concealed carry course for fifteen years until the goal of Constitutional Carry was attained. He has meteorology and mining engineering degrees and retired from the Department of Defense after a 30-year career in Army Research, Development, Testing, and Evaluation.

“If you like a good read and want to know the facts about wolves, especially in Alaska, read Wolves of Alaska.” ~ Dean Weingarten, August 30, 2022. How would you rate the The Wolves of Alaska – A Fact-based Saga?

5/5 (2 Reviews)
Some of the links on this page are affiliate links, meaning at no additional cost to you, Ammoland will earn a commission if you click through and make a purchase.
Subscribe
Login
Please login to comment
2 Comments
Most Voted
Newest Oldest
Inline Feedbacks
View all comments

Wolves belong in Alaska , the act of reintroduction in the lower 48 is a hoax and nothing more than bucket biology and environmental vandalism by introducing an evasive species . The feds lied and deceived the people of Montana for decades while practicing bucket biology and introducing the Canadian wolves . Smoke a pack a day ! FJB and the federal fish and game decievers .

The present world of world of wolf studies is ripe with political correctness.