U.S.A. –-(AmmoLand.com)-— As more and more people have been exercising their right to bear arms in the United States, the number of people who forget they have a firearm in their carry-on luggage has been steadily increasing.  The number of firearms caught at TSA checkpoints is shown in the chart below.

The number of people with carry permits has multiplied in the last decade, as has the number of states which do not require a permit to carry a concealed firearm. The legal system is known as Constitutional Carry or permitless carry. 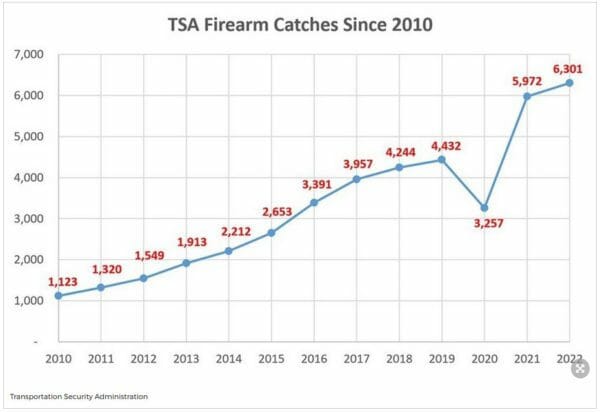 As more people exercise their right to bear arms, some are making the error of forgetting they had their firearms in the luggage they intended to carry on an airplane. The vast majority of people who make this error do so inadvertently.  TSA discovers about ten undeclared firearms for every million passengers screened, as shown in the numbers from 2021.

Firearm possession laws vary by state and local government, but firearms are never allowed in carry-on bags at any TSA security checkpoint, even if a passenger has a concealed weapon permit. In order to reduce the threat of firearms at checkpoints, TSA has increased the maximum civil penalty for a firearms violation to $14,950. TSA determines the penalty amount for a violation based on the circumstances in each case. TSA will continue to revoke TSA PreCheck® eligibility for at least five years for passengers caught with a firearm in their possession. TSA may conduct enhanced screening for those passengers to ensure no other threats are present. Depending on state or local law in the airport’s location, passengers who bring firearms to a checkpoint may be arrested by law enforcement.

The penalty depends on several factors, such as whether this was the first offense or if the firearm was loaded. Here is the  Table of Ranges of Civil Penalties for TSA for individuals, among others:

(3) Violations Committed by All Other Entities Including, but Not Limited to Airport Operators, Indirect Air Carrier, CCSFs, Individuals, Contractors, Small Businesses, etc.

People are not perfect. When you have over 22 million people legally carrying firearms, some will get busy and make mistakes. Some will leave a firearm in their luggage and forget to take it out in the rush to the airport, as they are delayed for an unexpected reason.

Why would the gun not be loaded?

Why should the gun not be loaded?

If they didn’t remember to take it out of their purse/briefcase/backpack, why would or should they have unloaded it?

That bit from the TSA vexes me. I don’t see where this bears on how severe the penalty should be.

Tex … Why is the revolver in the pic cocked ? I am not aware of any revolver with a cocked and locked feature .

Lol. Made me go back and look at the picture.
Good catch. 😉

Last edited 1 month ago by Bubba
2

It is a stock image from Getty. Yes, it was staged, or more likely, photo-shopped. I would bet considerable money on it. There are at least two other images using the same silhouette. One in a shopping bag, one by itself. The caption in istock is: “Xray scan detects weapon in criminals briefcase stock photo”. Notice you can see the metal buckle *through* the revolver’s cylinder!

As incompetent as TSA is, I’d bet 5 times those numbers got through undetected.

Yes, but did they make it past the baggage handlers is the question?

Who puts a firearm in carryon luggage?
Strange place for it.
I stash mine in my Super Tuck.
Or my street sweeper in my umbrella holder by the front door. 🙂

If anyone is caught at a TSA checkpoint without a loaded firearm or other suitable weapon, the TSA should offer them a loaner.

You are assuming that all those folks you talk about are competent to handle a firearm? I look around in airports, bus stations, train stations, stadiums, box stores – and guess what? I see maybe 25% of those folks that look like they could handle a stress situation involving gunfire – the rest of those pathetic fat bodies would keel over with a heart attack from the exertion of drawing the gun, or waddling quickly to find cover.

I just can’t imagine anyone not knowing where their gun is at all times unless they have so many of them stashed that they cant remember them all. I hate guns in purses and I sure as hell wouldn’t put one in my luggage. They belong on the person.

P.S. before anyone enters an airport they should always check with the airport first to let them know you are bringing a firearm on the premises, find out what the requirements are and meet them before entering the danger zone.

Oregoneistan where concealed carry in portland is illegal.

Media distorts these incidents into botched hijackings. Instead of forgetful travelers that are some of the airline’s best customers!

Forgetful? How in hell do you “forget” you left a loaded firearm in your carry on baggage? How? If they are that stupid, incompetent, or forgetful, I don’t want those dumb S.O.Bs anywhere NEAR me with a handgun. Period. It takes a special kind of stupid to not know where your gun is at all times. And if they DO know it’s in there, they even achieve a higher level of stupidity thinking they can get that through a scanner. Jeez Louise.

i remember recently some democrat lawmakers being caught with firearms at airports. have they been fined, imprisoned and banned from tsa pre-check? or is it just for regular people?