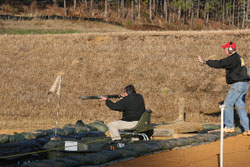 USPSA shooting involves lots of fast action. Shooters run through short obstacle courses, called stages. In these stages, competitors shoot multiple steel and paper targets from various positions with multiple shots. Courses of fire incorporate drawing the gun from the holster, making magazine changes and requiring the shooter to manage a variety of props in a safe manner. The time it takes shooters to manipulate a course of fire or stage is recorded along with their scored hits. The time is then divided into the hits scored. The fastest, most accurate shooter wins.

This year's match will have eight stages and will have five divisions – Open, Tactical Optics, Tactical Irons, Heavy Metal and Trooper.

The match will be hosted by the U.S. Army Marksmanship Unit and conducted by the USAMU Action Shooting Team; gunsmiths of the USAMU Custom Firearms Shop will be on hand to make emergency gun repairs.

Media are invited to cover the competition but should coordinate with the Fort Benning Public Affairs Office at (706) 545-3512 before coming to post. The match is open to the public.

About USAMU:
The USAMU's mission is to raise the standard of marksmanship proficiency and combat readiness throughout the Army by sharing knowledge gained from competing and winning in national/ international competitions, research and development and advanced training programs while enhancing the Army's recruiting effort through an active public information and public relations program. For more information on the U.S. Army Marksmanship Unit, contact the Public Affairs Office at (706) 545-5436, [email protected] or www.USAMU.com . The U.S. Practical Shooting Association is a nonprofit membership association affiliated with the International Practical Shooting Confederation, which is comprised of approximately 67 nations. For more information, contact Dave Thomas at (360) 855-2245 or [email protected]