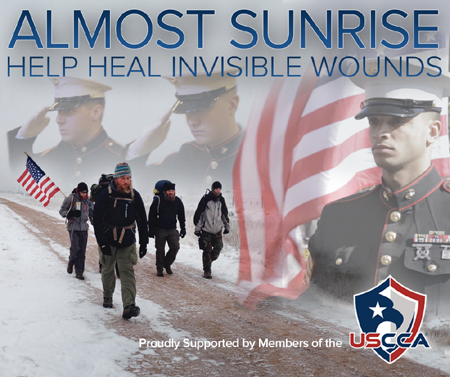 (AmmoLand.com) The United States Concealed Carry Association (USCCA) rallied its community to garner support for ‘Almost Sunrise,’ an up-and-coming documentary that brings to light a new and unfortunate epidemic of suicide among the country’s veteran community.

But Tim Schmidt, President and Founder of the USCCA, is equally passionate about supporting our nation’s veterans.

“As far as I’m concerned,” Schmidt says, “I owe them everything.”

So in 2013, when Tom Voss and Anthony Anderson—two Iraq War veterans—embarked on a 2,700 mile journey called Veterans Trek, Schmidt was first in line to donate. As the two men traveled from Milwaukee to Los Angeles, Schmidt reached out to the USCCA community to ask for help. And help they did: Voss and Anderson raised over $100,000 for Dryhootch, an organization that helps returning veterans cope with the physical and psychological effects of war.

Anderson reached out to the USCCA a second time in late May, when the team that accompanied him and Voss on Veterans Trek needed funds to edit and produce “Almost Sunrise,” a documentary that followed their journey across the country and helps to raise awareness about the troubling suicide epidemic among returning soldiers.

Schmidt launched a full campaign for the film, and the USCCA community responded with equal enthusiasm, helping to push the film to its $70,000 Kickstarter goal.

Michael Collins, the film’s director, was so overwhelmed by the support that he created a stretch goal of $100,000, much of which will be used for promoting the film.

“This film has the potential to change—and save—lives,” Schmidt says. “I’m incredibly honored to be a part of a community of responsible Americans who continue to give back in important ways like this.”

The United States Concealed Carry Association is a subsidiary of Delta Defense, LLC. Delta Defense, LLC was founded in 2004 by Tim Schmidt and is committed to supporting and educating responsible Americans who carry concealed.

Just as the government has done with those on Doomsday Preppers…

The problem with this is it is used as a way to disarm Vets for any reason when they have broken no laws. This agenda is just a back door gun grabber trick to disarm America’s best, before they disarm the rest!