USA – -(Ammoland.com)-“In New York and New Jersey, which have some of the strictest laws in the country, more than two-thirds of guns tied to criminal activity were traced to out-of-state purchases in 2014,” The New York Times “reports” in [another!] hit piece on the right to keep and bear arms. “Many were brought in via the so-called Iron Pipeline, made up of Interstate 95 and its tributary highways, from Southern states with weaker gun laws, like Virginia, Georgia and Florida.”

Chicago gangs get their guns from Indiana.  Californian criminals get theirs from Arizona.  It’s the fault of those states with “weak gun laws,” the propagand… uh … reporters conclude. We therefore must impose Bloombergian Intolerable Acts everywhere!

Never mind that when he was on the campaign trail, Obama tried to con anybody dumb enough to consider voting for him into thinking “what works in Chicago may not work in Cheyenne,” as if he actually didn’t want to impose his will everywhere. That brings to mind the old “Home Rule” scam, where “progressives” demand patchwork quilts of obscure diktats, the better to entrap you with, when it suits their purposes, but seem to forget all about local customs and sensitivities when pushing for national infringements.

And never mind that the states with the “weak gun laws” never seem to rack up the unceasing “gun violence” headlines, that is, except for in islands of Democrat rule.

Here’s something else The Times doesn’t want you to mind, and that’s some inconvenient truths the source of their data reveals.  Note buried in the story there’s a link to ATF’s “Data & Statistics” web page.  Scroll down on that and it includes links to trace reports, the most recent being for 2014.

Just for yucks, go ahead and open up the reports for the Big Four, those “gun control” nirvanas that are suffering so from the “Iron Pipeline’s” constant gushing flow: California, Illinois, New Jersey and New York.

First note all the reports bear the same caveat: 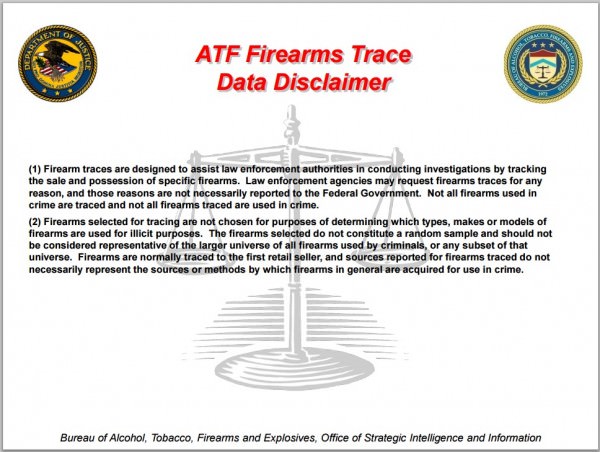 Then check the “time to crime” (period from initial sale to law enforcement “recovery”) numbers, respectively, California: 13.52 years; Illinois: 13 years; New Jersey: 14.7 years; and New York: 14.8 years. Those not only significantly exceed the national average of 10.88 years, meaning that pipeline must be clogged somewhere, but it kind of undermines the contention that recent moves to scale back on infringements in some states can be attributed to recent violent crime problems in others.

But what the heck — go ahead and stipulate that if any prized commodity is less difficult to obtain, interested parties will obtain it. So what?

All that does is highlight the glaring truth that criminals break the law. It’s what they do. Astoundingly, at least, apparently, to some, prohibition of those prized commodities invites bootlegging, and the violent crime that goes along with it. Thank goodness we have “the newspaper of record” to clear that up for us!

So in typical “progressive” Opposite Day fashion, the solution is to ratchet up the infringements on those who aren‘t criminals. And to blame America’s peaceable gun owners for having blood on our hands every time some reptile who can’t even be trusted with an Instagram account decides to act out his aggression with an illegally-obtained firearm.

Still, there was one reference in The Times piece I wouldn’t mind seeing someone follow-up on, an idea I had some years back but have never been in a position to do anything with: They linked to a “survey” of Cook County inmates asking how they got their guns. There’s another question I’d like to see these put to these guys:

What political party does your family identify with?

He blogs at “The War on Guns: Notes from the Resistance,” and also posts on Twitter: @dcodrea and Facebook.

Think what things would be like if all those millions of liberal disbursed from the cities and came to where we live, bringing their city ideas and proclivities with them. Then we’d have to go around really armed. You couldn’t trust any new face or turn your back on them, even at a distance.

If there is no huge gun violence in these states that has lax gun laws, even if guns are going north, it says the people of these large northern cities and ghettos are violent, and they will kill if they have to use bats, hammers, or anything they can get their hands on. Taking away guns from anyone or everyone is not going to make a difference.

Barrie, can you not read the caption by the photo? It clearly states the photo was modified, der!

maybe the most fraudulent photo I’ve ever seen. so, these “pistols” floated to the top of that barrel and came out first?

They want to restrict our rights because their plans don’t work Guess it has to be somebody’s fault that humans kill other humans and there is not thing anyone can do about it except be prepared to defend yourself.

Funny thing all the Holier than Thou types have armed body guards while hose they disarm do not.

My response is to tell them to Piss Off!

So since the French people have very strict gun laws, how did these Mudslimes get fully automatic AK’s ? and if they can get them into France, how hard would it be to get them here? Sleep tight there in all your big liberal cities.

Trying to argue from fact with a leftist is like trying to teach a pig to sing. You know the rest. Although if I were a gambling man I put money on hearing a pig doing an aria before I heard a leftist accept facts.

The hoplophobes and Communists dont want to take our arms because of crimes committed by criminal vermin and gangs. They want our arms to make it easier to enslave us. Their so called common sense gun laws is not about common sense or to reduce deaths. Its the the first step of total enslavement