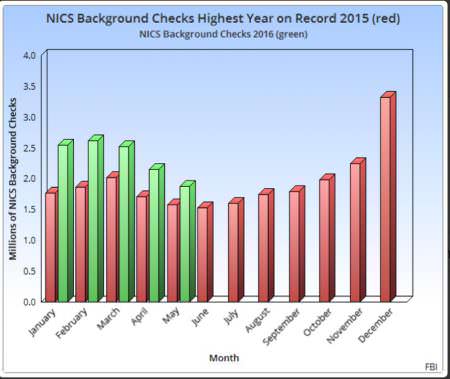 Arizona – -(Ammoland.com)-
In 2016, Americans continue to break records for gun sales.  While the National Instant Check System (NICS) does not track gun sales directly, the numbers are highly correlated. The numbers of NICS checks, and the increase in private firearms, have skyrocketed during the Obama administration.

The total for 2016 through the end of May is 11,698,006 instant checks. That is more than the entire year of 2007, which held the record up to that year. Thus, during the Obama years, the number of private firearm sales has doubled.  In 2015, the highest year on record, the total number of checks was 23,141,970.  That is just a hair short of double the number done in 2007.  2016 is shaping up to break the 2015 record by millions of instant checks.  In just the first five months of instant checks, the cumulative instant checks are more than half the total for all of the record breaking year of 2015.

May, 2016, has the most instant checks of all the months of May on record.  That makes 13 months in a row that have broken records for all previous years.  If the trend continues, 2016 will reach the record numbers of 2015 by the end of October, with the busy months of November and December still ahead.

If we reach 28 million instant checks in 2016, that will be about 16.8 million new firearms added to the stock in 2016.  That projection puts us at 405 million private firearms in the United States at the end of 2016.

It may end up being a little more or less, but that is the way to bet.  Because of the record breaking buying spree of guns that has occurred during Barak Obama’s regime, the total gun stock will have increased by over 30 percent.

President Obama has even bragged about this, in a left handed way. At a PBS News Hour, President Obama used the unprecedented gun buying spree to claim that he did not want to take people’s guns, which is why they purchased so many of them. From westernjournalism.com:

OBAMA: The notion that I, or Hillary or Democrats or whoever you want to choose, are hell-bent on taking away folks’ guns is just not true. And I don’t care how many times the NRA says it. I’m about to leave office. There have been more guns sold since I’ve been president than just about any time in U.S. history. There are enough guns for every man, woman and child in this country. And at no point have I ever, ever proposed confiscating guns from responsible gun owners. So it’s just not true.

It all depends on Obama’s definition of “responsible” and “confiscating.” If you like your doctor, you can keep your doctor.  If you like your insurance plan, you can keep your insurance plan.  The veterans and social security recipients who have become “irresponsibly gun owners” by bureaucratic fiat might disagree with President Obama’s characterization of events.

President Obama can be justly proud of the incredible growth in gun sales during his tenure.

Correct . They only say what they think you want to hear like a magician faking you out with one hand and doing something with another. I am from Texas and by thunder NO one will get any of my guns no matter what !!!

How to tell if Obama and the rest of the anti 2nd Amendment crowd are lying
Every time the open their mouths.
That crowd wants the Muslims to take over the world and kill everyone that does not covert or bow down to them
I never will bow down to Obama and his muslims pals

Never trust this idiotic jerk with his statements about not trying to take away everyone’ guns !!

Clearly, the people aren’t in a forgiving mood. They’re arming themselves against the nuts, felons as usual but also now against terrorism that seems to be growing. I believe they’re also insulating themselves against the possibility that their government might restrict what they have in homes for self defense. It’s highly unlikely that armed conservatives will comply with any new gun control laws but many are buying just in case.

As long as we have a pussy boy like Obama in office, American’s will move to protect themselves, because the government will NOT do it. And this is the America Hillary supporters want? I only hope that they are in the front of the line when the treat comes and they can find it off with nice words!!!