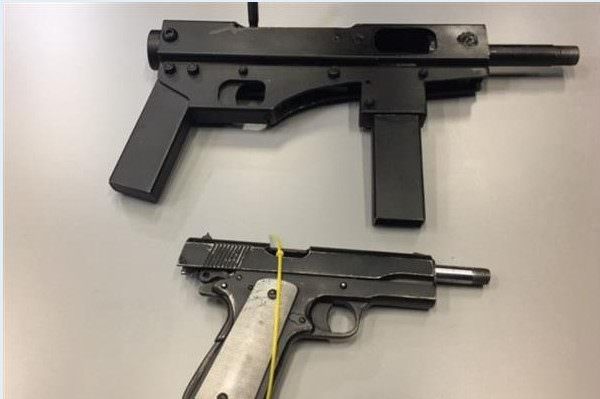 A highly sophisticated weapons production facility using 3D printers and computers to make machine guns has been uncovered in a series of raids across the Gold Coast.

The equipment used to make the weapons included computers, a 3D printer, drill presses and other gun parts and is believed to be the most sophisticated of its kind found in Queensland.

The submachine guns appear to be variants of the “Luty”. The Luty is  a homemade submachine gun design by Philip Luty.  They have appeared all over the world in places where it is difficult to legally procure firearms. The Luty is commonly made of sheet metal, pipes, and ordinarily available metal shapes.  I suspect that the “pill press” in the Guardian is actually an ordinary drill press.  It only took a few days for the 3D printing community to debunk the idea that a 3D printer was used in the construction of the homemade submachine guns. From 3dprinterchat.com:

A followup article from 3DPI actually contacted Detective Superintendent Jon Wacker of the Drug and Serious Crime Group  in Queensland, Australia to confirm what everyone in the 3D printing community knows.

During a raid as part of Operation Oscar Quantum, targeting the illicit manufacture and trade of amphetamines, an XYZ Da Vinci 3D printer was also found. “We had the guns out for display and in the media release I did say what we’d also located a 3D printer and with that poetic license has taken over,” said DS Wacker.

3D printers could be useful to produce some parts on functional submachine guns.  Working magazine bodies and followers have been made.  There have even been a few plastic springs produced.  But ordinary springs are easily made or purchased. It is not hard to imaging that substitutes, such as strong rubber bands, being used as a substitute for magazine springs. The weak point on most homemade submachine guns is the magazine. The most successful designs use existing magazines.

3D printing can solve that problem because it can accurately reproduce the complex shapes and geometries of successful magazines.

I have not seen a combination of improvised guns made by conventional means being used with 3D printed magazines.  If any other observer has seen them, please let us know.

The use of 3D printers to make even fake guns is forbidden by Australian gun law.  An Australian man was arrested last week for 3D printing replica guns.