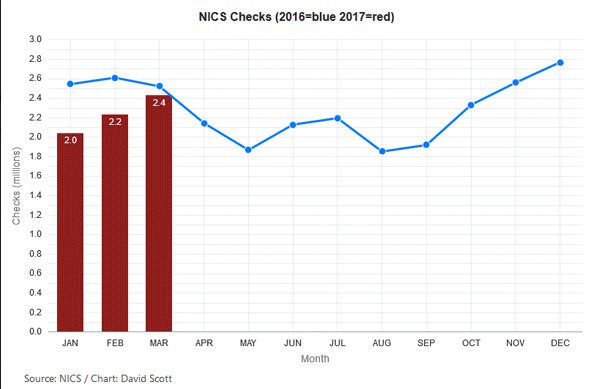 Both of those were driven by fear of strong gun control measures that might be passed by President Obama.

The Trump era of the National Instant Criminal Background  Check System  (NICS) checks has finished its first quarter. There have been four presidents that have had NICS checks done while they were in office.

There were two years and two months of NICS checks under President Clinton.  They totaled 18,574,000 checks.  During that period the NICS system was clarified.  Court challenges restricted how the checks were done and how long they could be stored.

They were done for the full eight years of the two terms of President Obama, totaling 157 million checks. 64,490,694 in the first term, and 92,742,463 in the second term. Numbers reached new records as several restrictions on gun ownership and sales circulated among the states and were championed by the Democrat party and President Obama.

It was anticipated that firearm sales and NICS checks would drop with a Trump presidency. It has not happened as expected.

Structural increases in the number of firearms owners may have increased the base level of sales.

There has been a gradual increase in the use of NICS for things other than firearm sales.  We will not know how much that is until the BATF figures come out in about two years.  The increases are for such transactions as the sales of suppressors/silencer, gun carry permits, and even checks on school teachers.

Kentucky has contributed to the number by running NICS checks on every concealed carry permit holder every month. Kentucky performs nearly three million checks every year.

The political uncertainty is likely to continue for some time. A major victory for Second Amendment supporters, such as passage of the Hearing Protection Act or National Reciprocity for concealed carry, might reduce the demand. Both of those may be months in the future.

The trend looks good for Trump era NICS to break all records for April.  We will know in four weeks.

To much of the left gun hating is part of their religion. They’re no more likely to become pro-gun as they are to become pro-life. There may be some left leaners gearing up but I believe there are other factors here as well. It occurs to me that many people who are pro-gun are buying firearms again because there is less likelihood of being tracked and pilloried by the current administration then the last. Also prices are dropping. Sales were up during the Kenyan’s occupation of the White House and production met the need. Now, using the AR15 for example,… Read more »

It’s all the occupants of the “Clinton atoll ” that are arming up. Look for a collateral increase in liberal prepper’s granola sales to estimate their component in the numbers.