The injunction is to prevent the State Department from implementing a court settlement with Defense Distributed, allowing them to exercise their First Amendment rights.

The permanent injunction was issued on the 27th of August, 2018, in Seattle, Washington State.  The temporary restraining order had been issued on 31 July.   Judge Lasnik has taken the power of deciding what may or may not be lawful, based on the principle of potential harm. Potential, or irreparable harm, is almost never used in First Amendment cases.  It is a form of prior restraint.

It is a principle of law that in order to have standing for a lawsuit, the plaintiff must have suffered actual harm. Potential harm is not an allowed reason for action in most cases.

Judge Lasnik ignores this principle, and holds that in his opinion, allowing computer files to be published, in accordance with the First Amendment, 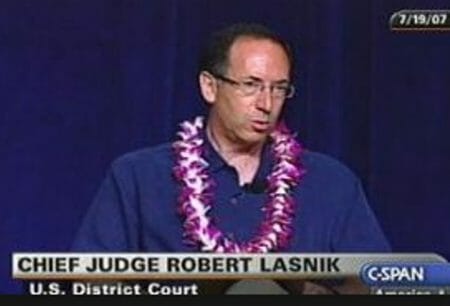 might allow a person to be able to create a firearm, that might be used in the commission of a crime, that might cause a person to be harmed, that would cause harm to the State of Washington. Judge Lasnik simply ignores the multiple other ways that equally effective non-detectable firearms can be made. He deliberately shows technological ignorance. From the decision:

Plaintiffs have submitted evidence, including declarations and the federal defendants’ prior findings, showing that the States will likely suffer irreparable injury if the technical data for designing and producing undetectable weapons using a commercially-available 3D printer are published on the internet. Many of the same concerns that prompted the DDTC to conclude that the CAD files are “defense articles” within the scope of the USML apply with equal force to the States. A gun made from plastic is virtually undetectable in metal detectors and other security equipment intended to promote public safety at airports, sporting events, courthouses, music venues, and government buildings. The portability and ease of a manufacturing process that can be set up virtually anywhere would allow those who are, by law, prohibited from manufacturing, possessing, and/or using guns to more easily evade those limitations. The publication of the technical data would subvert the domestic laws of states with more restrictive firearm controls and threaten the peace and security of the communities where these guns proliferate.

It is unlikely the plaintiffs will prevail. The legal and technical arguments are bizarre. The State Department reached the settlement on the basis that they would lose the case in court, and because the technical arguments are not reasonable or rational. Judge Lasnik ignores that the State Department has responsibilities in international trade, not in domestic affairs.  The judge openly states his opinion that this information will harm communities. He ignores the harm done to communities by ignoring First and Second Amendment rights.

The decision is a classic case of judge shopping and judicial activism. Judge Lasnik does not like what the executive branch is doing. He issues an injunction. He suffers no harm when he is ultimately overturned. He is a Senior Judge already retired, taking cases voluntarily. In the meantime, he causes considerable harm to the defendants. As the defendants, in this case, are in the Trump administration, that may be his desire.

Judge Lasnik grew up in New York City and was appointed by President Bill Clinton in 1998.  He assumed the Senior status in January of 2016.

This action is the latest of a dangerous trend to allow any one of 600 district judges in the United States to stop actions of the executive branch for the entire United States. It allows opponents of an administration to search for a sympathetic judge out of a field of hundreds, to launch a lawsuit to stop the ordinary processes of government for partisan purposes.

This injunction could eventually be appealed to the Supreme Court. Both sides would have reason to do so. It would be a good case for the Supreme Court to issue guidance on the ability to District Courts to make decisions in law for the entire nation. Justice Clarence Thomas alluded to this problem in a recent decision. From Trump v. Hawaii:

In sum, universal injunctions are legally and historically dubious. If federal courts continue to issue them, this Court is dutybound to adjudicate their authority to do so.

An unintended consequence of this action is more publicity for Defense Distributed and Cody Wilson. More publicity means more 3D files will be downloaded from other sources. More people will become interested in creating their own firearms outside of commercial factories.

All this works nicely to end the possibility of gun control as currently considered in the United States.

nothing but a nothing wedge issue. not important in any real sense.

send a USB drive to wikileaks, and blame russian hackers.

it worked for the democrat party……

Listen to Cody Wilson talk about the decision here:

I just want to know if I would be bound by that court order if I posted them for download on the internet? Our would they have to go back to court for a new court order?

My understanding from an interview with Cody Wilson this past weekend is that the injunction only applies to him. So now he is selling the files via thumb drives, which is not covered by the injunction. He is also preparing a suit for denial of rights under color of law against all of the states’ attorneys general who are involved. He is also prepared to go to the Supreme Court if necessary.

Well if it wasnt a crazy judge in Washington state it would have been a liberal loon judge from California. Adhering to the law is not a concern of these judges, they have an agenda they are forcing on us Americans.

Yet another example of a judge imposing his viewpoint on a ruling rather than the rule of law. Oust the bums!

I think this goes a long way to show that gun control is dead, ingenious criminals swapped out toy guns for real police versions…..

When will President Trump stand up to these liberal/Obama judges, exercise his lawful rights as president? He has all the lawful power in the executive branch which can be used to shut down these traitorous judges.

President Trump shares the blame for these rulings. He should have replaced these “Obama Holdover” judges immediately after taking office. They’re still on the bench hindering the President.

A President has the power and authority to immediately replace U.S. Attorneys , and various administrative executive office holders. But judges and the number of judges are for life.
President Trump can fill vacant seats, but judges cannot be forced out of office.
obama and clinton had 16 years to appoint judges.

The “printer files” require some level of intelligence and experience. Every public library will have books on mechanical and chemical engineering. The hardware required to use the “printer” files include a printer of appropriate type. Or a CADCAM CNC milling machine. You will need the proper chemicals, “plastic” or perhaps powdered metal and a laser that will fuse the powdered metal to create a form. Since a factory made firearm can be bought for $500 or less and the “printer” setup will likely cost many thousands of dollars. As for reducing crime, the police are very lax in securing guns… Read more »

Too late,the train of free speech done left the station as the files are out.

No need to appeal the injunction is now moot as it always was. Cody Wilson is “selling” the CAD files at any price you want to pay. $.01 if you like. The injunction said he couldn’t post them for all to down load for free but it didn’t say Wilson couldn’t sell them. It also said he could distribute on media. As far as the states lawsuits they have no standing. The federal government has jurisdiction over foreign policy and they licensed Wilson under ITAR to distribute the CAD files. The states cannot overrule the federal government per the supremacy… Read more »