U.S.A. –-(AmmoLand.com)- On 26 July 2020, a paper titled: Glass table injuries: A silent public health problem was published in the American Journal of Surgery.

The results of the article have been widely published in the public media. From newsmax.com:

Bonne’s group found more than 3,200 U.S. cases of glass table-related injuries requiring trauma center care occurring between 2009 and 2015. The data was collected from the 96 sample hospitals included in the National Electronic Injury Surveillance System database. More than half of the injuries were traced to faulty glass tables, the researchers noted.

Multiplying that by the almost 5,000 emergency care centers nationwide, Bonne’s team estimated there are about 13,800 U.S. cases of severe injury tied to glass tables each year.

The team also looked more closely at the 24 cases that their Level 1 trauma center treated between 2001 and 2016. In this smaller grouping, the investigators found that half of their patients experienced injuries to their deep organs, upper torso, abdomen or joint cavities and required surgery. About 8% died within a month of injury. Most of the injuries were suffered by children younger than age 7 or adults in their early 20s.

Access to the article is here. A one time read costs $35.95.  I contacted the lead author, Dr. Stephanie Bonne, and she graciously sent me a read-only copy.

From the article, page 10, supplied by Dr. Stephanie Bonne:

Dr. Bonne clarified the 8% fatality rate was calculated for the entire sample, not just the 24 cases at the one trauma center.

The study has a bar chart showing the distribution of cases by age. From the chart, it was simple to obtain good distribution numbers.

That translates to 168 children aged 0-17 who die in fatal accidents involving glass table tops per year. 55 of those children are projected to be under the age of five. The study numbers were done from 2009 to 2015. 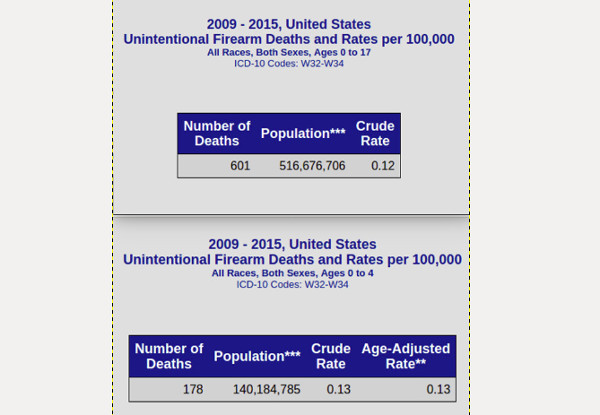 In 2018, the last year we have numbers for, there were 458, quite close to the projected number for fatal glass tabletop accidents. CDC WISQARS database: The number of people who are deliberately killed with firearms by homicide or suicide is not addressed in this article.

Here’s an couple of interesting statistics that I believe reflect just how responsible and safety conscious the average American gunowner is. Mexico, a country where firearm ownership is highly restricted, and a country with 1/3 the population of the US, has more accidental firearm deaths than the US does annually. Additionally our rate of accidental deaths from firearms is roughly the same as New Zealand’s despite the US having almost 4 times as many guns per capita, and New Zealand having strict licensing requirements for gun owners.

I the Nam, a sleeping bunker was to be torn down because the space was needed. All the Marines gathered around it and hundreds of rats ran out. An E-tool was the weapon of choice. The local Viets were very happy to receive boxes of rats for dinner!

You know the saying, “Tastes like chicken”. Ate a few when I was deployed and had to try the street vendors BBQ rat cuisine. I’d say it has tastes and texture like squirrel or rabbit. Dip’em in buttermilk and dredge in salt, pepper and flour then pan fry to a golden brown.

The point of this comparison is to show how successful the gun culture has been in reducing fatal firearm accidents.

It also shows the reality of how twisted the anti-gun harpies are, and how successful their constant barrage of disinformation has been in presenting a false narrative of how dangerous firearms truly are.. which is a fraction of what they would have us believe.
This factoid, the deaths by glass tabletops, is very interesting, particularly when shown next to deaths by firearms in the same age categories. Nice work.

The irony of society judging how a child dies or injured is politically biased. On one hand unborn children are killed without any fanfare by the thousands, but if one is killed by a gun it’s front page news. Death by glass tables is a new one for me, but buckets and plastic bags are common as depicted by all of the warning signs. The hypocrisy of placing blame on inanimate objects and using statistics to demonize only certain ones (firearms) rather than the people who cause them has been a playbook standard.

i wonder how many children get hurt from glass sliding doors. I walked through one when I was about 13 and two of my friends walked through one and one of them cut his face badly. It scarred him for life and he never had it fixed. None of us died but I had never heard of a glass table killing a child.

musta been a NOrway rat. They are far smarter than the noral bilge/sewer rats, AND they are VERY skilled climbers.

I cracked up when yuo finished the note with “women don’t like it”. (I dont know of ANYONE who LIKES rats of any variety two or four legged.

fit a hawser cone to the vent stack a few inches below the tip of it. Fit it with the cone tip pointing upward. They can’t climb outward and downward past the rim of it. One less way they can get inside and harrass yer wimminfokes. But the downside is you will have fewer opportunities to show off your boot-stomping skills to said wimminfokes. Tradeoffs, you decide.