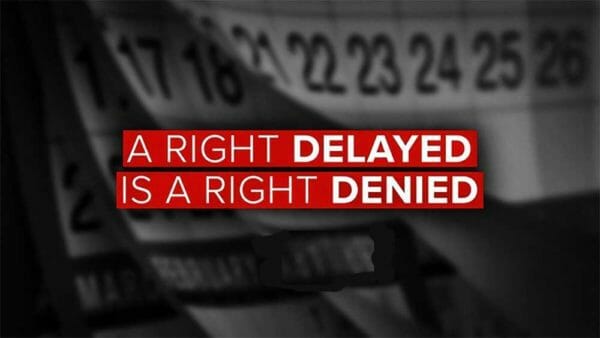 A NICS audit is where the FBI checks to make sure the states follow federal law when adding prohibited people to the NICS indices. Gun Owners of America (GOA) has discovered the delay in the audits through an open records request to the Commonwealth of Virginia.

AmmoLand News in communication with the FBI found that the delay runs deeper than just Virginia.

A previous Freedom of Information Act (FOIA) request filed by GOA showed that the Old Dominion accidentally added 46,000 non-federally prohibited gun buyers to the NICS indices. Federal law prohibits anyone who has been involuntary committed to a mental institution or adjudicated as a mental defective from buying a gun. Virginia law bans anyone admitted to a mental institution from purchasing a firearm even if they commit themselves to treatment. Critics believe that the state law could prevent a gun owner from seeking help and is detrimental to safety.

The Virginia State Police entered every person into the NICS database with a PCA “J,” marking the potential gun buyer as federally prohibited. The 41,000 residents prohibited from buying a gun by state law should have been marked with a PCA “D.” The Virginia State Police software developers didn’t account for the difference in VA state law and federal law into consideration when coding the software.

It appears that the mistake wasn’t intentional by the developers. The correct requirements were not communicated to the developers by the state. The Virginia State Police provided the list of the 41,000 Americans incorrectly entered into the NICS indices to the FBI, which then removed their status of federally prohibited from owning a firearm. The state claims the error in the software has been corrected.

The FBI audit of Virginia to verify that the correction has been properly completed last should have happened last year but wasn’t due to the COVID delay.

GOA hoped to verify that the problem in the software was actually fixed, and the NICS audit results would show the proof of an applied solution. A spokesperson for the FBI confirmed that COVID had delayed all NICS audits.

The notice reads “Pursuant to Virginia Code § 2.2-3704(B)(3), the requested records could not be found or do not exist in the Department’s investigative files. Please be advised, the Department did not have a 2021 NICS audit, it was delayed due to COVID. NICS has rescheduled our audit for October 2022.”

Gun rights advocates worry that other even less second-amendment-friendly states (IE: New Jersey) could be making the same mistake as Virginia. With the added delay due to COVID, it might be more than a year before those potential mistakes will come to light. The delay could also exacerbate any problems because the delays in the audits could mean thousands of Americans could be incorrectly added to the NICS indices that an FBI audit would have found.

These audits are essential to catching mistakes by point of contact states. GOA believes in the abolition of all background checks but believes if they do exist that the FBI has a duty to make sure Americans are not incorrectly added to the NICS indices.

unless someone is suing them nj ny mass comifornia could care less if they are violating someones rights, title 18 is never enforced get real

Perhaps we’d all be safer if the FBI stopped the J6 investigations and other nonsense. And instead, fix the NICS. Seems redundant to require a NICS check for current state licensees. And it’s just stupid to require annual background checks for every owner. After all, it’s the criminals who commit crimes — uh-huh really — and the FBI is busy checking on law abiding owners.

So is the NSA!