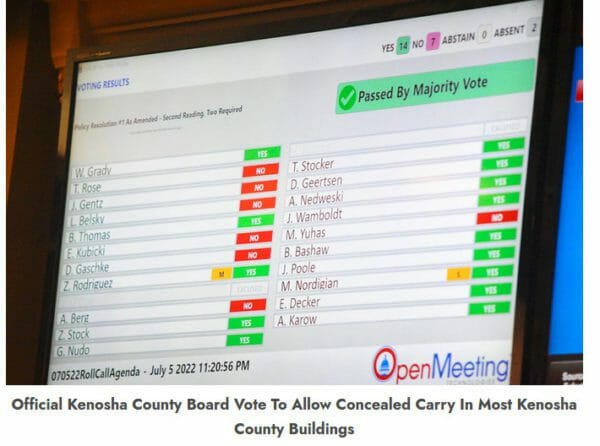 A famed Democrat politician once said all politics are local. After the chaos of the riots in Kenosha in 2020 and the national attention brought about by the self-defense trial of Kyle Rittenhouse, the Kenosha County Board has overwhelmingly voted in favor of armed self-defense as a human right. From Kenoshacountyeye.com:

In a bi-partisan vote just before midnight on Tuesday night, the Kenosha County Board voted 14 to 7 to allow concealed carry in most county-owned buildings. This includes taxpayers and employees. This measure was sponsored by Board Vice-Chair Erin Decker. Supervisor Yuhas proposed an amendment that passed -it directed employees who choose to carry at work to keep the firearm “on their person” and not in a desk drawer, purse, or an otherwise unattended location. Decker previously told KCE that she proposed the change because she feels that visitors to county buildings and county employees should not be denied the right to protect themselves. The “no guns allowed” signs went up in 2011 at the same time that the City of Kenosha government voted to allow guns in most City-owned buildings. Both City and County governments now have similar policies which Decker said will “eliminate confusion.”

The support for the Constitutional right to bear arms by the Kenosha County Board was affirmed with a second vote minutes after the vote to remove the ban on arms in most County Buildings.

This was a resolution to declare Kenosha County a Second Amendment Sanctuary County. It proclaimed that the board would oppose any infringement of the constitution. This passed by a slightly larger majority, 16-6.

It will take some time for the employee’s handbook to be re-written and to take the no-guns signs down from the county buildings.

There were seven Kenosha County Sheriff’s deputies at this meeting as the last meeting ended abruptly when Kenosha resident Joel Trudell was arrested for disorderly conduct and resisting arrest. Tonight’s meeting was peaceful and civil. Within six months, the County HR department will finalize the employees handbook and the “no guns allowed” signs will come down. 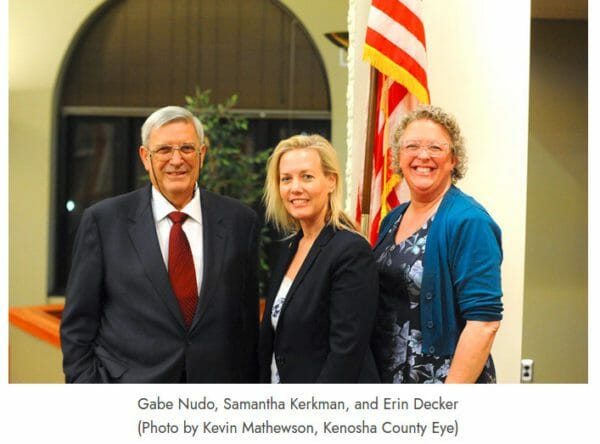 Kevin Matheson of the Kenosha County Eye writes these elections are part of a “red wave” of conservatives being elected in 2022.

Elections have consequences. The restoration of the right to bear arms for all people in Kenosha County buildings (including employees) shows how increasing majorities of the people demand their rights be preserved and respected.

The newly elected Kenosha County Board is eliminating quite a few gun-free zones.

Correction: Kevin Mathewson was incorrectly spelled as Kevin Matheson. I regret the error. Kevin does wonderful work at the Kenosha County Eye.

Amazing, and congratulations to the citizens of Kenosha! This would never happen in my little South Carolina county, where you must run a gauntlet of armed guards or “deputies”, metal detectors, and like rot to even get inside the courthouse, which still houses a multitude of various county government services. Blows my mind to think that back in the 1970’s, I walked in almost every day to do my job as a SO dispatcher, via the back ramp, which is now gated and locked. Any citizen could walk in back then and not feel like they were a jail inmate,… Read more »

Last edited 1 month ago by Grigori
3

“the Kenosha County, Wisconsin, Board of Supervisors voted 14 to 7 to remove the ban on the bearing of arms”

The Board did not remove the “ban”. They just allowed some special, privileged friends of theirs to carry in the way they deem proper.