U.S.A. – -(Ammoland.com)- “A federal grand jury in Des Moines returned an indictment … charging Adair Chief of Police Bradley Wendt with unlawfully obtaining and possessing machine guns,” the United States Attorney’s Office for the Southern District of Idaho announced in a mid-December press release. “According to unsealed court documents, Wendt … exploited his position …  to acquire 10 machine guns purportedly for the official duties and responsibilities of the Adair Police Department, but later resold several of those machine guns at a significant profit.”

Nice work if you can get it. The problem is, without a badge, you can’t, and therein lies the crux of police as “Only Ones.”

That’s a term I started using (and trying to get others to adopt) after a DEA agent explained to a classroom full of school children that he was “the only one professional enough” to carry a Glock and then shot himself in the foot trying to re-holster it. As I explain to readers on my The War in Guns blog:

“[T]he purpose of this feature has never been to bash cops. The only reason I do this is to amass a credible body of evidence to present when those who would deny our right to keep and bear arms use the argument that only government enforcers are professional and trained enough to do so safely and responsibly. And it’s also used to illustrate when those of official status, rank, or privilege, both in law enforcement and in some other government position, get special breaks not available to we commoners, particularly (but not exclusively) when they’re involved in gun-related incidents.”

“You know the score, pal. If you’re not cop, you’re little people.”

They sure do make it tough to “Back the Blue” sometimes, don’t they? For those gun owners who wave that flag and insist it’s just “a few bad apples,” what percent would not obey orders to confiscate your guns?  Show your work.

The Adair indictment also illustrates another danger, particularly in jurisdictions where police officials are either enthusiastically on board (or even driving) the citizen disarmament bandwagon.

“What Would Happen if ‘Battle of Athens’ Round Two Ever Becomes Necessary?” I asked back in 2014. That article looked at the militarization of police departments with surplus equipment from the feds. It focused on recent acquisitions by the McMinn County Sheriff’s Department and speculated on how the World War Two veterans trying to ensure election integrity against a corrupt sheriff and deputies would have fared had they been greeted by full autos, grenade launchers, and MRAPs.

Let’s keep working for freedom to reduce the need to ever have to find out. Let’s not forget that things may come down to resistance or surrender.

While the charges against Chief Wendt are just that, while he is entitled to a presumption of innocence until proven guilty beyond a reasonable doubt, and while the Justice Department and ATF have given gun owners very little reason of late to trust any charges they bring as anything other than tyrannical overreach and/or in-your-face political rape, it’s not out of line to speculate that exploitation of the badge was going on.

There is one thing that is provable, and this one that I’m quoting from The Captain’s Journal is beyond the shadow of a doubt:

“There is a solution to all of this, of course.  Undo the infringement of the NFA, GCA and Hughes Amendment.  Then no one will be able to enrich themselves this way by selling machine guns.”

The NFA is the root cause of millions of problems. It needs to be abolished ASAP, with extreme prejudice. Unfortunately, I’ve been singing this same refrain since 1988… but almost nobody has ever agreed with me. I have noticed a lot of changes in latitudes and changes in attitudes over the last few years tho. When I first started singing it, all I got was mostly blank stares followed by; “What’s an NFA?” It seems pretty obvious to me that, when a country freezes the number of some product at a certain level, then that artificial shortage cannot help but… Read more »

“So what drove us to create such artificial shortages in the first place? Was it actually just an honest mistake? Or was the 30,000 percent profit margin the whole idea to begin with?” Great question. The latter seems to be today’s driver, I’m not so sure about the former. I just checked out Britannica Online, (never, ever use Wikipedia),to read about the Hughes Act the author mentions. 2 things immediately came to my mind after I looked at the list of supporters versus opponents. First the NRA supported this! I had no idea the NRA had already lost their direction… Read more »

Reagan did not support 2A. I had to sell a MINI14 when I was in Germany, thanks to his signing of that BS. I did not lose any money. It was easy enough to sell. But I would of rather had the firearm.

Hmm had he already started the degradation caused by Alzheimers? Not long after this he came out in support of the POS that became NAFTA!

Abso-freaking-lutely. Good piece and likely a pipe dream, but number of regulations by unelected bureaucracies are only pointing to some serious challenges of the NFA and GCA.

The federal scumbags have really been targeting the local and state police lately. I guess the tyrants at ATF are pissed because the police stopped helping and assisting them in their war against law-abiding citizens. This has got to be stopped ASAP.

There’s an old saying that goes; I’d rather die on my feet than serve on my knees!
IF NOT NOW, WHEN?

What is the straw that will break the camels back? How long and when. I think 2024 elections will be it especially if we get a republican president again.

a few questions. who were the purchasers of those fully automatic firearms, are they being charged? why did it take a seemingly incompetent government agency over 4 years to obtain an arrest warrant for this guy? oh wait, i just answered that one. was his ffl revoked? are all the fully automatic firearms accounted for? many leo’s claim they support the Second Amendment but then don’t act like it, officer safety and all that. when tshtf, how do you think they will respond? will they uphold their oath of office and disregard orders and possibly lose their jobs or wll… Read more »

I’m retired now, but my Oath was more important, you can always find another job. “The truth above all”

Obidens government will mow us down, he is making sure of it. Don’t forget he authorizes and promotes the use of F15, Nukes and drones.

DEA agents may shoot themselves in the foot, but BATF (Burn All Toddlers First) are even more ‘professional’ than that! 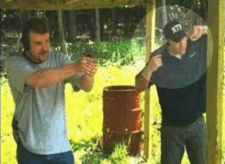 “If you’re not cop, you’re little people,” is my one of my favorite movie quotes and I use it to describe the city police which has a much different culture than the county.

If Wendt wanted 90 more machine guns to establish a town armory for the populace should an emergency arise, then more power to him. If it was the far more likely reason – to sell on the black market then, to paraphrase from another movie, ‘welcome to the pokey, pal.’

great content it is excellently written: I have to agree abolish any all infringing firearms restrictions .. The only problem is it is never going to happen. you mention that we will eventually have a choice of, resist or surrender, the choice was obvious and already made. gun owners have already surrendered, because we are losing our rights 1 rule, 1 law, 1 gun at a time, and Nobody has done anything, (“Money is Not the Root of all Evil People are”) Merry New Year!!! May this year be better than the last. Maybe this will be the year we… Read more »

Last edited 1 month ago by ashort
6

No insult but we are never going to be free with oppressive demonkkkrats in control. I pray your wish becomes true but I see allot of house cleaning that needs to be done starting with 18 Judas RINO’s.

The NFA and GCA are nothing but infringements. Had they not been enacted this incident would not even be a thing. So many incidents would not be a thing. A $200 an item cash grab.

I wonder how many fully auto guns this protector of justice sold to felons like they have done in kommiefornia multiple times from your street cop to the police chief.

Oregoneistan. I call for 50 years minimum, no retirement or pension and a 250,000 dollar fine.

I already posted that point back on the original articles. While I get along fine with my new Sheriffs Dept after running the last one out of the county I enjoy voting down their expansion and any increases in power because I prefer limited government which is easier to supress in times of tyranny such as today. Rest assured those machine guns would NEVER BE USED against the insurgency. Cops aint got the stones to go against their master. Cant even keep them from hitting the grid right out in the open near military spec ops to threaten thier fams… Read more »

Oops– should be “United States Attorney’s Office for the Southern District of IOWA.” Sorry.

Undo the infringement of the NFA, GCA and Hughes Amendment. Then no one will be able to enrich themselves this way by selling machine guns.”

Yup. When some toys are more special than other toys, then we WILL have special people become THE ONLY ONES able to play with them. Remove special categories of toys we will have fewer special people allowed to have them

The police are the standing army the founders warned us about.

The feds sure are!