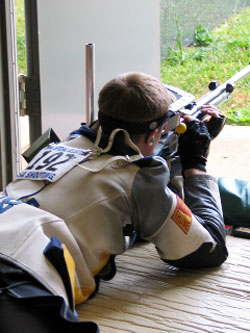 COLORADO SPRINGS, Colorado – Two-time Olympian Matt Emmons (Browns Mills, New Jersey) won his second medal at the 2008 ISSF Rifle/Pistol World Cup Final in Bangkok, Thailand when he captured the gold medal in the Men’s 50m 3 Position Rifle event today. This is the second consecutive year Emmons has claimed the title in this event.

Emmons entered the final in first place with 1171 points and a five point lead on Ukraine’s Artur Aivazian, who had 1166 points. Emmons secured the gold easily after shooting a 98.0 in the final and finishing with an overall score of 1269.0.

“There must be something with this shooting range,” said Emmons, who won the title in 2004 and 2007 at the same range in Bangkok. “This match closed a long season and now I am going to take time off from shooting. Katerina, my wife, is pregnant. I am going to become father!”

Emmons is coming off a 2008 Olympic silver medal win in the men’s prone event and Katerina (Katy) Emmons is the Women’s 10m Air Rifle Olympic gold medalist and women’s 3 position silver medalist for the Czech Republic.

The World Cup Final silver in the men’s 3 position event went to 2008 Olympic gold medalist Aivazian, who finished with a finas score of 99.7 for a total of 1265.7 points. Jia Zhanbo of China, the 2004 Olympic Champion, earned the bronze with a total score of 1264.6.

Jamie Beyerle (Lebanon, Pa.), a 2008 Olympian and the Women’s 50m 3 Position Rifle silver medalist from the 2008 Milan World Cup, finished in fifth place in the women’s 3 position event today with a qualification score of 580, an excellent final of 100.3 for a total of 680.3. Morgan Hicks (Roy, Wash.), a 2004 Olympian who captured the gold medal in the women’s 3 position event at the World Cup in March in Rio de Janeiro, Brazil, took eighth place with a match score of 578, a final of 93.7 and finished with an overall score of 671.7.

Germany’s Sonja Pfeilschifter took home the gold with 688.8 points, while the silver went to the Kazak shooter Olga Dovgun, who finished with a total score of 688.3 points. The bronze medal was awarded to 2004 Olympic gold medalist Lioubov Galkina of Russia, who secured the medal by outdoing the title defender Yin Wen of China in a shoot-off with a score of 683.5 + 10.4 to 683.5 + 9.8 points.

The final day of competition at the 2008 Rifle/Pistol World Cup Final will take place on Wednesday, November 5 with two-time Olympian Emily Caruso competing for a spot on the podium in the Women’s 10m Air Rifle event. Matt Emmons will vie for his third medal of the competition in the Men’s 10m Air Rifle event and two-time Olympian Jason Turner will be looking for his first ever World Cup Final medal in the Men’s 10m Air Pistol event.