USA –-(Ammoland.com)-There is so much good news that goes largely unreported that it makes me want to scream.

As I write this, just a couple of days ago, a 14-year-old boy in Phoenix who was watching his three siblings at home shot a punk who busted through a door and pointed a gun at the young man.

This is an incredibly wonderful news story that should be the lead story on the evening network news. It should be the front-page story in the New York Times. The Sunday morning talking heads should talk about it.

But it won’t be covered by the media. Outside of the Phoenix area and this opinion piece in The Washington Times, this wonderful good-news story will not be heard or read. What a shame.

The real shame is that similar incredibly good news events happen every day countless times across America and get virtually no ink or airtime. Evil conquers good in the media: When Americans use guns to stamp out evil, news reports are virtually nonexistent.

But today I’m screaming with joy. A young man saved himself and his three young siblings by using his father’s gun to blow a hole in the maggot, who probably is a paroled punk with an arrest record 3 feet long.

This young man should be honored with a ticker-tape parade in Phoenix and granted immunity for life from Arizona state taxes. I’m calling Sheriff Joe Arpaio to request that “America’s sheriff” make this young man an honorary member of the Maricopa County Sheriff’s Department.

I would love nothing more than to shake the young man’s hand and thank him for making America a better place to live, work and play. This young man is a hero of mine. As a National Rifle Association board member, I will ensure he is given a lifetime membership in the NRA.

No one knows the evil intent of the street rat who broke down the door. It makes a person’s blood run cold thinking what this subhuman would have done to the boy and his young siblings had the teenager not blasted the guy first.

Good conquered evil this time. A smile is welded on my face for the actions of this young man. Because of this good-news story, I will play my guitars a little louder and with increased spirit whilst I write a good-over-evil love song.

It is easy to focus on the negative, and there is much to be negative about in America, but let us not forget that there also is an incredible amount of goodness happening in the U.S.

We should honor the actions of this young man by training an army of other young people how to use guns so, God forbid, if they are ever in a similar situation to this Phoenix teenager, they, too, will blow holes in maggots.

Do you want a safe, prosperous America? The first thing we need to do is remove evil instead of releasing it time and time again to prey on law-abiding Americans.

There is a young man in Phoenix who saved his life and the lives of his young siblings with a gun. There is nothing evil about that – only goodness.

Ted Nugent is an American rock ‘n’ roll, sporting and political activist icon. He is the author of “Ted, White, and Blue: The Nugent Manifesto” and “God, Guns & Rock ‘N’ Roll” (Regnery Publishing). 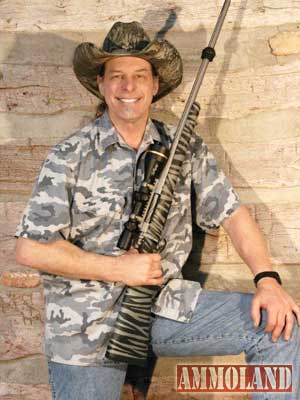 If Uncle Ted had another son, he'd look like this 14-year-old boy