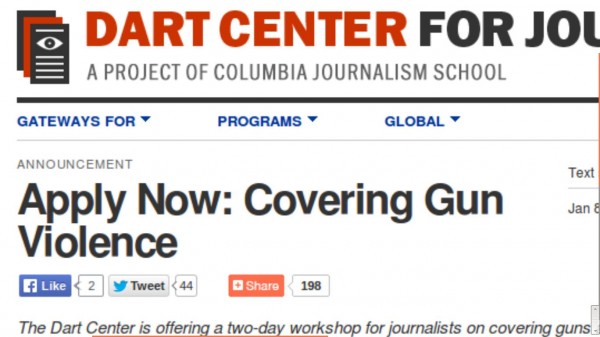 Arizona – -(Ammoland.com)- The Dart Center for Journalism & Trauma has accepted money from the highly partisan Everytown for Gun Safety to put on a two day seminar on covering guns and gun violence.  They have already been criticized for creating a propaganda vehicle using money supplied by Michael Bloomberg.   As their article includes the sensationalist and discredited claim that there have been “nearly 100 school shootings”  since Sandy Hook, it is hard to consider them unbiased.   Nonetheless, I sent the point of contact an email asking that she include voices with assumptions other than that of Michael Bloomberg.  Here is the email that I sent.

I am sure that you are aware of the criticism of the Dart Center for accepting highly partisan money for the workshop.   I expect that the center will take measures to insure that presenters are balanced and offer views both for and against some kinds of legislation; presenters whose assumptions are that guns create more violence, and presenters whose assumptions are that guns lead to less violence.

Please send a list of those who will be presenting at the workshop.   I suggest that you include John Lott, as the major researcher who wrote “More Guns, Less Crime”.     Lott also wrote a book on “The Bias Against Guns” which included academic research about how the media cover gun issues.   I would think that research alone would make him a “must have” presenter.

Another presenter might be Alan Korwin, who lives in Phoenix, and who has been a critic of the way that gun related stories are covered in the media, for years.   He is nationally recognized as an expert on gun law.

I would be interested in attending the workshop.  I write about gun laws and self defense on a regular basis, have media credentials, and am published mostly in online gun related media such as “The Truth About Guns” and “Ammoland”   I taught the concealed carry course in Arizona for 15 years, and have strong opinions on the subject of current media bias against armed citizens and in favor of highly restrictive gun laws.

I hope to be pleasantly surprised by the balance chosen in presenters.

I will be looking forward to Kate’s reply, and will be sending her a more formal request to attend the workshop.

It appears that Kate is ignoring me.  It would have been polite to at least tell me that the Dart Center is not interested, will not send me a list of presenters, or simply finds me unsuitable.   I have sent another email detailing some of the problems that are in the Center’s invitation, if they are to maintain any credibility on guns and gun violence.   The consensus of the other media that I talked to at the Shot Show was that they simply did not care what we think, and will do the bidding of Bloomberg and those that he funds.

I will wait a little more for a reply to my second email.

We have fallen into the trap of using the language of the gun haters. It ISN’T “gun violence”! The Oxford Dictionary defines “violence”; Behavior involving physical force intended to hurt, damage, or kill. A gun is not a “behavior”. A firearm is a machine which reacts to a controlled explosion to direct “energy” to perform a designed task. The engine of a car, a bus, a train, a plane, etc., all do the same thing as a firearm. There is NO such thing as “gun violence”! Let’s not fall for the Liberal, media driven narrative. Let us gun-rights advocates STOP… Read more »

More Equal Than You

Will media whore David Gregory be involved here ? Since the DC prosecutors will not do their job , the people should.
Start by bringing suit ( class action ? ) against the District for un-equal application of laws. Can Judicial Watch or Legal Insurrection help here ?