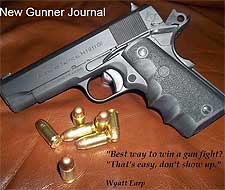 USA -(Ammoland.com)- “There are three types of people in this world: sheep, wolves, and sheepdogs.  Some people prefer to believe that evil doesn’t exist in the world, and if it ever darkened their doorstep, they wouldn’t know how to protect themselves. Those are the sheep.  Then you’ve got predators, who use violence to prey on the weak.  They’re the wolves.  And then there are those blessed with the gift of aggression, an overpowering need to protect the flock.  These men are the rare breed who live to confront the wolf. They are the sheepdog.”
– Wayne Kyle to his son Chris in “American Sniper,”  Clint Eastwood’s interpretation of the autobiographical book of the same name.

The above quote is loosely based on an essay entitled “On Sheep, Wolves, and Sheepdogs” by Lt. Col. Dave Grossman and although it was not in Chris Kyles autobiography, it was written into the script to give depth to who Chris Kyle was and what he was about.

Since the movies blockbuster opening, the term has quickly become a rallying point, an expression of pride pertaining to those who own and carry a sidearm for protection of themselves and others – but I believe the quote goes deeper than that.

I certainly trust that those who have made the commitment to carry a gun for self-defense, who have spent countless hours and dollars training, are far more likely to be a Sheepdog than those that invest in Hope as a last line of defense in the most dire of circumstances.  I think those who carry have a heightened sense of responsibility to themselves and their loved ones, and by extension,  an innate sense of responsibility to those who are defenseless in the face of the Wolves. But in the context of the movie, I think it is more a warriors ideal than a statement of fact.  It is meant to bring out the hidden Sheepdog in all of us, to help us identify not just who we are, but who we can aspire to be.  Maybe what Chris Kyle’s Father is saying is more a question than a statement.  Maybe what he is asking is this – Can you imagine the world and how it would be if we taught our children that it’s a noble and just thing to stand up for those who can’t stand up for themselves?  To believe in and live by a Code of Honor that includes faith of principles and the strength of will to stand by them?

How much better would our world be if more people were Sheepdogs than Sheep?

In the end, if you consider yourself a Sheepdog, the lingering question you then have to ask is this… Do I want anyone else to know I’m a Sheepdog?

If you are Pro 2A, own a gun and or carry concealed, you’ve probably had discussions with close friends and family about your decision to carry and your beliefs in defending your Second Amendment Rights, and while most of us don’t go around boasting about carrying a sidearm, there are probably more people who know you carry than you might suspect.  And this might be a problem.

By writing my blog, New Gunner Journal and posting pro 2A articles to my Facebook page, many people know I carry a gun for self protection.  I’ve talked with many of them on the reasons why, or put them to my blog for answers to their questions.  But is this a good thing?

I like to think that I am educating those Sheep who would have our Second Amendment Rights suppressed by legislation, and I believe in the long haul that’s how we make a difference.  We don’t need to turn the Sheep into pro gun people, but if we can assuage their fears about those who carry, make it more of a “I don’t want to carry, but I don’t care if you do” ideal, we still win the fight.

But in a bad situation, I’m not so sure I want the Sheep to know I am carrying.

If the Sheep know you carry, are those people going to expect a certain response from you given their only real experience of these predicaments come from any number of television shows?  And in any given situation, are the Sheep going to feel threatened where you may not?  Do you want a fearful Sheep to unexpectedly offer up the fact that you’re carrying, possibly inflaming a manageable situation?

Or worse yet, what if you are say, in a restaurant or a bank when three guys decide to walk in and rob the place?  Maybe they tell everyone to get on the floor.  Maybe they tell everyone that if anyone does something stupid, they will kill you all.  Maybe you’ve decided that the odds and logistics, at this point, are against you, and you decide to wait until an opportunity arises before making a move, if you make any at all.

And then, from out of nowhere, someone you know who is a Sheep, someone who is shaking with the fear of dying, points at you and tells the bad guys that you have a gun!  What then?

Their fear that you would pull your gun and get them all killed has now changed the situation in a very bad way.  They may have forced your hand or, worse yet, they may have just gotten you killed.

So, I think it’s important to think through every angle when making decisions on what we say and to who.  For their safety and for ours.

As was told on a forum I belong to, a few couples are leaving a concert in Chicago, several of them are staunch anti gun people, but they are aware, through many discussions, that one in their crowd carries for self defense purposes.  As they turn to the large, fairly empty parking lot, they see several people of suspect intentions standing around their car, which is now by itself in the corner of the lot.  And now, these Sheep who want your gun banned, look at you and ask… “Do you have your gun on you?”

When the situation becomes menacing, everyone loves a Sheepdog.  But don’t get your Sheepdog shot.

My new book “I’m Married… Shoot Me!” The harrowing tales of your average Husband. Children, insanity and manly cowardice, all wrapped up in love – is now available through Lulu.com