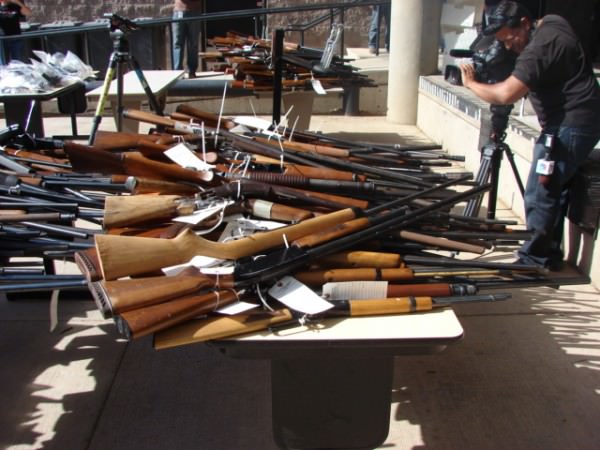 Arizona – -(Ammoland.com)- I have previously written that the primary purpose of gun turn in events has been political theater designed to teach the lesson that guns are bad and should be turned in to the police.  A number of academics have done studies that show that gun turn in programs are ineffective in decreasing crime.  Even the “progressive” economics author of “Freakonomics” says that they are counter-productive for actually decreasing crime.   From the “Freakonomics” web site:

When it comes to gun buybacks, both the theory and the data could not be clearer in showing that they don’t work. The only guns that get turned in are ones that people put little value on anyway. There is no impact on crime. On the positive side, the “cash for clunkers” program is more attractive than the gun buyback program because, as long as they are being driven, old cars pollute, whereas old guns just sit there.

This is from 2009.   It is not particularly unusual; academic studies are in agreement that gun “buybacks” do not reduce crime, and that police resources used for them could be better spent elsewhere.

The disarmist author of the opinion piece in the Chicago Sun-Times admits that  gun turn in events, called in Orwellian terms “buy backs” (you cannot buy back something that you never owned), do not reduce crime.  Then he gives the real reason for the event.  Remember that the event is paid for with tax dollars.   From chicago,suntimes.com:

Voluntary gun buyback programs, such as Chicago’s, have been criticized as ineffective. The police tend to recover old, malfunctioning firearms or weapons from people who didn’t want them and were unlikely ever to use them. And the number of guns collected is just a drop in the bucket compared with the numbers of guns out there. A handful of studies have not found a direct correlation between gun buyback programs and reduced rates of gun crimes.

There is, nonetheless, great value in such programs. They are part of a larger effort to reset society’s thinking about guns, to spread the message that we are awash in guns — so many of them illegal — and we must do more to combat gun violence. If buyback programs also directly reduce the number of gun crimes, so much the better.

The bold lettering has been added for emphasis.  The major purpose of gun turn in events is for propaganda.   It does not matter if they actually have an effect on crime.  Brain washing the people is the more important purpose.

It gets better.  The author, who is not named, libels Second Amendment supporters who dare to use some clever activism to show the event for the sham that it is.

Don’t believe for a second the rhetoric that pro-gun groups, like the rest of us, want to reduce the gun violence that is destroying cities.

With typical disdain for any opinion but their own, the author is not willing to allow that any dissent can be legitimate.    If the author allowed that dissent might be legitimate, he might have to examine his own premises.  That is much to threatening for disarmists, as most of their premises are built on false views of reality.    Gunssavelives will be turning inexpensive and worthless guns for money to educate children in gun safety.

When restrictions on gun ownership and guns sales fail to reduce crime,  disarmists always claim that they did not impose enough restrictions.  In fact, bans on guns do not reduce the murder rate, and never have.  There are numerous studies that show when bans are implemented, the murder rate goes up or the ban has no effect.

We need a ban on using tax dollars to propagandize the electorate.   Using propaganda to “manufacture consent” has been the operating principle of the progressive era for the last century.  It is a subtler form of tyranny.

Freedom of the press was meant to prevent such tyranny, but it faltered when the vast majority of the media came under the dominion of leftist ideologues in the 20th century.  Now, with the repeal of the “fairness doctrine”, the rise of the Internet and social media, freedom of the press is returning to the form the founders intended and were familiar with.

It was never believed that the press could be “objective”.  It was believed that a wide range of outlets, each with their own agenda and belief structure, would allow adults to form their own opinions about the issues of the day.

We are returning to such a system, and the media cartel hates it with a passion.

Definition of disarmist
c2014 by Dean Weingarten: Permission to share is granted when this notice is included. Link to Gun Watch

After the buy-back happens, nothing will have changed. The criminals will still keep their weapons, and keep committing their crimes, as that is what criminals do. Few in government seem capable of realizing that. If you want to decrease violent crime, execute the violent offender after his 3rd conviction. Even the FBI has said that the majority of crimes are being committed by repeat offenders. It’s like they are retarded, and just can’t learn.

They brought in the Big camera for this when a cell phone would of worked just fine…….lol

Liberals see that pile and think every gun was a criminals gun and now the world is a safer place…..

Looks like a bunch of junk guns… lol none of them there a-salt wepons….. morons…. do they think a criminal is going to turn his good guns in?….

My comment not politically correct enough. Really time gun owners stop being one issue voters .We really need to speak out about how the District of Criminals is assaulting America / Values on all fronts. Time to stop being mindless slaves. Going along to get along is our demise.

Hey doesn’t everyone want a Walmart gift card ? In Ct you can turn in you’re AR-15.Get a whopping $ 400.00 for it.Looks eminent domain in disguise. How do the gun grabbers think they can buy back something they never owned and paid for themselves ? Any guns of value the thin blue line receives. They put them in their own private collections. And substitute it with a clunker to be destroyed. So many plays on Orwellian words. Sadly most lemmings don’t see the forest through the trees. The District of Criminals threw away the “Founder’s Republic” for a Orwellian… Read more »

It’s not only tax $$ that fund gun buys. Here in PA they’ve used money seized (I’m being polite here I should have written stolen) as part of the war on drugs farce. I wrote about how they twisted the law to do this in ” Stopping Illegally Funded Gun Buy-Backs” http://theinternationallibertarian.blogspot.com/2013/03/stopping-illegally-funded-gun-buy-backs.html

The war on drugs & the war on guns go hand in hand. To stop one we need to stop the other.