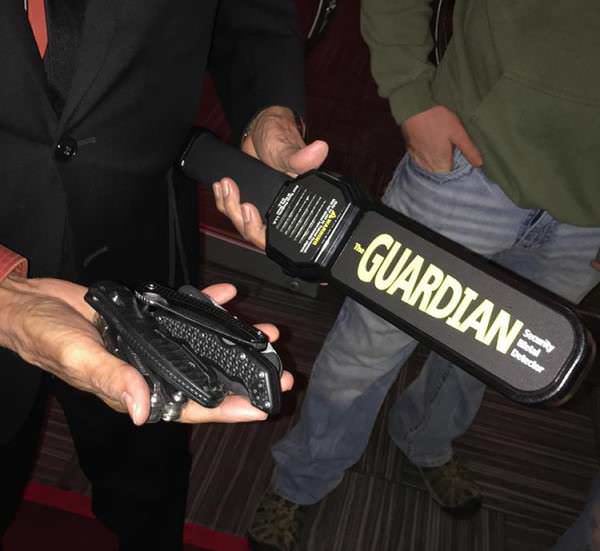 Arizona – -(Ammoland.com)- One of my contacts in Las Vegas is Garrett Cameron of Montactical.com. They are doing a good business of custom stencils and Duracoat finishes of just about any pattern that you can imagine on a firearm.  Garrett was with a few friends and associates from the Shot Show.  They decided to give the Hustler Cub a try.  I do not think they knew it is owned by a noted disarmist and Hillary Clinton Supporter, Larry Flynt.

When they got to the door, they were met by a security guy with a metal detecting wand.  He was very polite, but asked that they hand over any knives that they had on them.

You can see from the picture, it was a nice handful of well made blades.  Probably about one for each member of the group.  Maybe somebody had a pocket knife and a multi-tool.

After collecting the pocket knives, the security guard asked them if any of them had any guns on them.  The group looked at each other face to face for a couple of seconds.  After all, they were from the Shot Show.  They gathered up their knives and headed out to the car.  The idea was that they would lock everything up in the trunk.

Then somebody said “Why should we go someplace where we are not trusted?”

The whole group decided that they would find other entertainment that evening.

I doubt that Larry Flynt will change any policies at the Hustler Club.  But the idea that people who are willing to spend some money out on the town would seek entertainment  at a friendlier venue is worth noting.  When I have seen “no gun” signs go up, I have seen them come down just as often.  Offending a significant customer base is not good management. From what I see on the Internets, there are 3-10 times as many people who feel strongly about the right to keep and bear arms as there are people who feel strongly about infringing on it.

The disarmist side coaches all of its arguments on myths that do not bear inspection. Guns and the carry of guns are up, crime is down. Murders are primarily committed by violent people with long, violent, and mostly criminal, histories.

Guns in the hands of ordinary people are seldom used to do harm; accident levels are at a 80 year low, most people do not find that significant numbers of old white males who commit suicide with guns would not have found another way to end their life, when other countries have twice our suicide rate without guns.

Shot Show attendees are particularly decent and helpful people.  It is a place where if you misplace  your cell phone, you can be pretty sure that it will be returned to you.  That happened to one of my associates two days ago.

In Las Vegas, members of the gun culture decided not to support an organization that is hostile to their values. Just a bunch of fun loving guys who decided that their rights were worth a small bit of consumer activism.

Why would any Christian, patriot or gun owner want to enter that cesspool? Flynt is a cancerous wart on America.

Hey thanks liberal patriot for reminding me about where values have gone.

What! No “designated carry guy” permits for sale in Nevada? Harry Reid must be getting old!

Hey DaveW, don’t be so uptight. Maybe you should get a lap dance, have a beer and relax.

In the article it says, members of the gun culture decided not to support an organization that is hostile to their values. Are we supposed to give praise to the VALUES of people visiting these types of establishments.