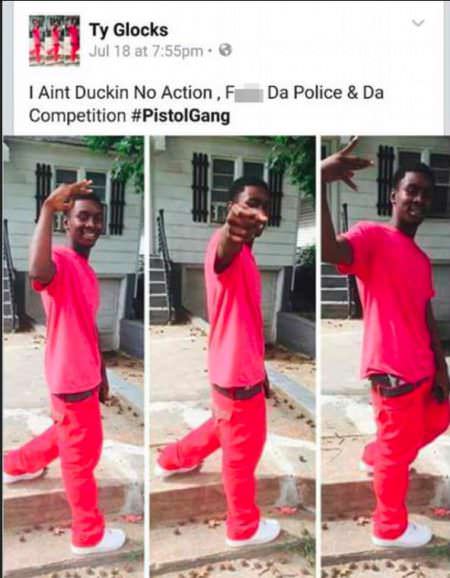 Arizona – -(Ammoland.com)- Police have long understood that violent criminals almost never use holsters.  The obvious reason is that a gun is readily abandoned by tossing it from a car, in a dumpster, down a drain, or off a bridge.  A holster, normally worn on a belt, is much harder to discard, and can result in embarrassing questions when found in a search.  Having a holster on ones person when you are not allowed to carry or possess a firearm becomes rather problematic.

There is no real firm answer, but in general, no street thugs don’t tend to use holsters. The reasons are many, and the main ones are posted above. I’ve come across people illegally possessing/carrying weapons in holsters, but they tended to be concealed in vehicles inside a holster (generally the holster the gun was in when it was stolen).

I’m working on year 13 as an LEO and I’ve never charged illegal possession or CCW against someone who was actually wearing a handgun in a holster.

My experience mirrors Landric’s. I can tell you that I have seen many shootings inside bars or other buildings begin with the words, “(X)itch, go out the car and gimme my pistol….”. The “holster” is the area under the front seat or in the spare tire well, depending on the individual’s need for…concealment vs. speed of draw. Generally, if a bad guy is carrying the gun, he has just retrieved it/had it retrieved and stuffed it down the front of his pants (and may be holding both up with one hand in some cases) or a pocket if it is of the non-stolen type-a small .25 or .22.

I do remember a sawn-off shotgun carried under a coat, suspended from the arm by a cloth strip nailed to the stock. It was way under the legal limit, and the guy’s attorney tried to say it was legal because by measuring from the tip of the barrel to the end of the strip, it was PLENTY long. But that was years ago, pardon the drift, anyway.

There is an FBI published study from 2006 that confirms these comments.  The study published by the FBI is “Violent Encounters: A Study of Felonious Assaults on Our Nation’s Law Enforcement Officers.”  In a summation from stoppingpower.net:

The offenders said they most often hid guns on their person in the front waistband, with the groin area and the small of the back nearly tied for second place. Some occasionally gave their weapons to another person to carry, “most often a female companion.” None regularly used a holster, and about 40% at least sometimes carried a backup weapon.

In motor vehicles, they most often kept their firearm readily available on their person, or, less often, under the seat. In residences, most stashed their weapon under a pillow, on a nightstand, under the mattress–somewhere within immediate reach while in bed.

Here is a comment from activeresponsetraining.net, claiming knowledge of a U.S. Secret Service Seminar:

“95% of criminals carry their guns on their strong side, mostly stuck in the front of their bodies, inside the waistband without a holster.”

– From a US Secret Service Seminar on detecting concealed weapons

Here is confirmation from an official Secret Service document, though it simply says “a majority”.  From  popularmechanics.com:

The majority of those righthanded people that carry handguns illegally carry them in the right front waist band, loose.

While it is impossible to claim that violent criminals never use holsters, it appears to be very rare.  If a person is carrying a gun in a holster, they are almost certainly a peaceful, responsible, gun owner.


©2016 by Dean Weingarten: Permission to share is granted when this notice is included.

The argument is not ignorant; it is in fact, informed. That is why there are multiple, credible sources to back up the correlation. The only ignorance is the lack of concise argument or logic in your replies, Clark.

It’s only an “ignorant” position if you presume the author is claiming causation rather than correlation.

Nope; it is just an ignorant position, period, end of story. Nice try but no cigar.

Try smoking something other than blunts, Clark.

The last sentence in the article is so ignorant it is funny. Might as well claim a person wearing a wristwatch vs no wristwatch is almost certainly a peaceful, responsible gun owner. This is the flip side of the argument that guns, by themselves, cause crime. The person watching Dean at the old folks home really needs to keep him away from the computer.