Arizona – -(Ammoland.com)- On  Saturday, 11 June 2016, the Wayne County Sheriff and anti-Second Amendment activists held a gun turn in event at the Mathis Community Center.  The turn in was hyped by numerous local news media, providing free publicity for the event.  But the actual coverage of the event was remarkably free of any mention of the numerous private buyers who competed with the “buy back” organizers for the firearms that were brought to the event.

It may not have been hard to compete.  The gun turn in organizers only offered $50 for each gun turned in.  Any working gun is worth at least that.  From wxyz.com:

(WXYZ) – Thanks to a $25,000 donation, the Wayne County Sheriff’s Office was able to buy back hundreds of guns from residents ready to unload.

No questions asked, $50 for a gun–that’s an offer the Wayne County Sheriff’s Office has made before, but this buyback was different.

You can see that quite a few decent guns made it past the private buyers to the turn in table. 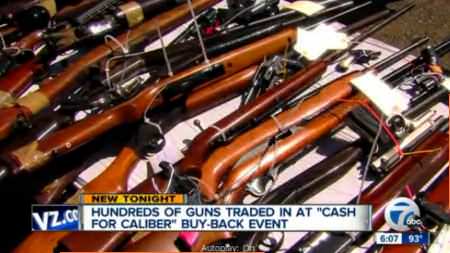 There is a Browning Auto-5 or clone, some decent .22 rifles, a Smith & Wesson classic revolver or two, and much more.  It appears it was a great day to be offering cash for guns in Detroit.

It seems hard to explain the lack of any news coverage of the private buyers.  After all, according to the narrative set up by the turn in organizers, they should not be there.  People should be glad to turn in $500 shotguns and revolvers for $50.

In reality, it is easy to explain.  The news networks did not cover the private buyers for exactly that reason.  Private buyers destroy the narrative that guns are bad and should be turned in to police.  It shows that many people value guns, which are prized and desired for multiple purposes.

But the private buyers were there, and that sort of fact is increasingly hard to cover up from the editor’s desk.  The private buyers organized on Facebook, and on local activity announcements.  They showed up, and the old media cannot put their presence in the memory hole any longer.

This action serves many useful purposes. It stretches the turn-in budget so that more guns can be taken off the street. It helps keep fearful widows from being defrauded of most of the market value of the gun they are turning in. It prevents valuable assets from being destroyed by bureaucratic inflexibility. It is a win-win-win situation. The ideal situation for those organizing the turn in would be to allow private buyers to purchase the valuable guns, while having the organizers take the cheap guns “off the streets”. As these events are ideologically driven, that seems unlikely, but it might be worth an attempt at outreach. All parties would benefit.

Private buyers dispel the pernicious message that guns are bad and should be destroyed.

If it saves just one gun, it’s worth it.