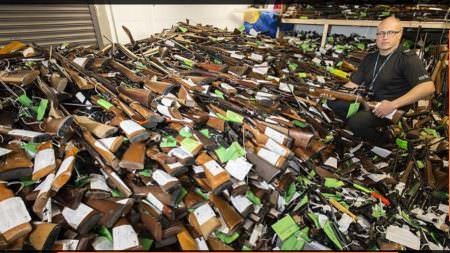 Arizona – -(Ammoland.com)- 11 years ago in Scotland, in 2005, a drug addict murdered a 2 year old boy with an air rifle.  Killing someone with the power limited air rifles in the UK is extremely rare. Anti-gun activists used this event to impose licensing of even the underpowered airguns allowed in the UK.  The licensing will only apply in Scotland. In the rest of the UK, air rifles will continue to be available over the counter.

People who wish to license their airguns will have six months, starting 1 July to license them or turn them in. From dailymail.uk:

This will make it a criminal offence to have an air weapon without a licence or a permit.

Anyone found guilty of the new offence could be fined or face up to two years in prison.

The Scottish Government had pledged to introduce the scheme following the death of Glasgow toddler Andrew Morton, who was killed by an airgun in 2005.

Mark Bonini was sentenced to life in prison after being found guilty of murdering the two-year-old, who died after being struck in the head by an air gun pellet.

So far the force and the Scottish Government have hailed the scheme a success, with thousands of potentially deadly weapons now off the streets.

The emotional posturing and opposition to anything remotely to do with guns, even airguns, is similar no matter what the power of the gun.  We see the same lack of any rationality in legislation aimed at firearms in the United States.  It is clear the animus is directed at the mere idea of a gun, and at anyone who engages in the shooting sports, or who uses any kind of gun for any purpose.

In 1998 a Journal of Clinical Pathology report claimed that there was about one death by airgun per year in the UK.  Of the 5 cases examined, 2 were suicides.  The report notes that air rifles do not have enough energy to penetrate adult skulls, unless they enter the eye socket or temple.

It is likly that fatalities with airguns have fallen significantly since 1998.  Airgun crime peaked in 2006-2007.  From BASC Scotland:

Dr Colin Shedden, director of BASC Scotland, said: “Offences involving air weapons in Scotland have fallen by 75% in recent years. In 2006-07 there was a ten-year-peak of 683 air weapon offences. In 2012-13, after six years of steady decline, there were 171 offences. In addition, all firearms offences are now at the lowest level since records began. Airguns are already extensively regulated by law, with more than thirty offences on the statute books. Bringing in this legislation will not deter those who are already determined to break the law.”

Since 2005, I have found 3 more airgun fatalities in the UK. The latest 3 were all ruled accidents, one in 2007, one in 2009, and one in 2016.  That is consistent with a 75% drop in fatallities for the last 11 years. Such numbers are so small as to be statistically insignificant.

There are about 60,000 firearms licenses in Scotland.  It is estimated that there are several hundred thousand airguns.  Licenses will be “may issue”.  Good cause will be required.  The cost alone will be prohibitive to many, at 72 pounds ($103) initially, and 48 pounds ($68) for renewal every five years.  The licensing scheme seems designed to reduce the number of people who have airguns.

Airguns in the UK are limited to 12 foot pounds or less.  Any airgun with a higher energy level requires a firearms license.  As a comparison, a .22 short propels a 29 grain projectile at 1050 feet per second, producing 71 foot pounds of energy, approximately six times as much as the most powerful unregulated UK airgun.

This is the continuation of the slippery slope that started in the UK in India after the mutiny of 1837.  The British rulers determined to disarm the Indian population.  They did so by enacting a “may issue” permit system for firearms.

After WWI, the system was imported to the home islands, because of fear of revolution.  The slippery slope brought about the elimination of permits for the purpose of self defense, gradual tightening of requirements to obtain a permit, requiring a permit for shotguns, eliminating the possibility of a permit for handguns, pump action shotguns, and semi-automatic rifles.

None of these actions had any measurable effect on the crime rate.

Now Scotland is requiring the same permits for air guns as required for firearms.  Airgun use is already regulated by 30 different laws.

The slippery slope may be a considerable ways from the bottom.  There have been serious proposals to ban knives that have a point.

I understand that the long bow is still allowed, but carrying one in public may result in your arrest for carrying an “offensive” weapon.
©2016 by Dean Weingarten: Permission to share is granted when this notice is included.

Give up your property for free – time to replace your government.

So by doing this , Scotland is catching up …………… to New Jersey Laws , think about that.

Want my air gun? Blow on this!

Scotland’s politics are only slightly to the right of communist China. Scots have always been hard socialists and drool over big government as evident by their EU support among many other things- very sad. “Tough guy” Sean Connery is one of them and is very anti-firearms ownership.

Anything confiscated is property of the people and should be resold to help pay the cost of such a stupid law.