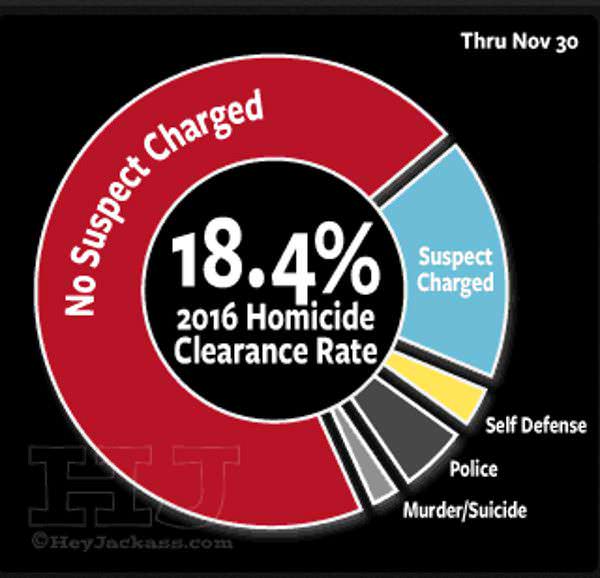 Nationally, the clearance rates for homicides is about 63 percent. We know that most homicides occur among criminals and their criminal associates. Most of them are not legally able to possess firearms. They have a significant incentive to avoid the authorities. In Indianapolis, police are wondering how many of the unsolved homicides were justified. From fox59.com:

During recent months, IMPD commanders were discussing whether some of the murders investigated by detectives should be reclassified as self-defense homicides.

On Sept. 14, the bodies of Mack Taylor and Alexander Brown were discovered in an alley near the 3000 block of North Gladstone Avenue where detectives determined two days earlier they had attempted to rob a drug dealer.

Detectives have considered whether or not that drug dealer fired back in self-defense of a home invasion robbery.

“You have the right to use deadly force to prevent the threat, imminent threat, you don’t have to wait to get hit,” said Hennessey. “It could be serious bodily injury or death so you can kill someone that is gonna beat you up.”

A few days later three people died of wounds as the result of a shootout in the 2000 block of West 76th Street. A fourth person survived, and, without any witnesses left alive to counter his story, claimed he was defending himself from a drug robbery.

“Just because you’re committing a crime doesn’t mean that you have to allow yourself to be robbed or killed or beaten up,” said Hennessey.

In some cities, such as Chicago, the clearance rate is much lower, about 20%. If the chance of being caught after justifiably killing someone is one out of five, many criminals are accepting that risk. A feedback effect occurs. People do not trust the police, the police solve fewer cases, so fewer people trust the police. In Chicago the feedback loop has been accelerated with the Ferguson Effect, where the authorities do not back up the police, so the police take fewer risks, leading to higher homicide rates.  From chicagotribune.com: September 9th

Those figures — known as the clearance rate — include homicides marked as solved in the current year but committed in different years. But when old cases are stripped out, Chicago’s clearance rate for 2016 homicides drops to about 21 percent. In all, Chicago police had solved just 92 of 432 homicides committed in 2016 through Aug. 16, according to police statistics.

Experts point to several reasons for the exceptionally low clearance rate in Chicago. Most killings in Chicago take place amid a street gang culture that intimidates anyone from coming forward with information.

It is certain that some percentage of unsolved homicides were justified. We will never know how many were.

If BHO and Hillary had their way, they would have turned the US into a “Sanctuary” country….just those idiots in Europe have done. Language, boarders and culture……without that you don’t have a country. Might add security and a strong military too. I hope Trump stops funding the UN or at least make major cuts to funding that useless, one-world organization of spys and deviants. It’s been reported the US funding approaches $8 billion per year. That’s a drop in the bucket according to BHO.

The Mayor and apparent “City Officials” believe they will support the Sanctuary city with a 1 million dollar Fund to defend the undocumented. It appears that reading the attached reports, the problem is Drugs and Gangs. Uhhh, where is the Drugs coming from? No curfew?, National Guard, State or County Police to enforce curfew, Stop and Frisk that worked in many other cities! Where is the prez, he was appalled when 23 children / Trayvon Martin, and Michael Brown killings, I notice Mr. O and family never return for an overnight in their hometown>

Not sure who “Hennessey” is, but he’s on shaky ground with his comment that “just because you’re committing a crime, you don’t have to let yourself be shot…” Actually, I think you usually forego the right to claim self-defense if you were in the process of committing a crime when you were attacked. Thus, a drug dealer who shoots a “customer” who tried to hold him up, while in the act of trying to sell him cocaine, has used a gun in the commission of a felony (worth a mandatory 5 years in a federal prison, as I remember) and… Read more »

Dean, You didn’t mention that many people are angry when a murderer is only sentenced to a few years in prison, instead of receiving life. Those cases can result in a revenge retaliation. Revenge is a dish best served cold.

The 2A is the right to gun people down in the streets.

Chicago another “sanctuary city” run by Obama’s buddies….who cares anymore? Normal people will eventually leave these areas, just like Detroit and look what that got them ……a waste land of “do not enter zones”.

Detroit has changed. The police chief recently came out in favor of law abiding people owning guns for self-protection.

Changed? Desperation. The average response time of the Detroit cops is 58 minutes…of course the police chief is going to allow self protection, that’s all they’ve got. A YouTube video called “Detroit Real Time Ride Along” has a lot of crime facts about Detroit. Wonder how they compare to Chicago?

Yup. Detroit looks like London or Berlin in the immediate aftermath of the WWII bombings. If liberals won’t acknowledge the consequences of their policies in a place like that, they will most certainly deny them in more subtle forms, i.e. the failure of our public schools. This is what governance by emotion, rather than facts and data, will get you…………….every time.

If it’s a ‘good shoot’ what’s your chance of getting a ‘jury of your peers’ in a place like Ferguson, Missouri? Factors like that aren’t conducive to people sticking around for the Police.

If people prefer to use the duelling method instead of calling the police then what’s stopping them?

Yawn. Who cares? Everyone knows Chicago is a toilet. Live in a toilet; get used to crap.