Arizona – -(Ammoland.com)-This picture shows the “bullet hole” in the window of the class room at the Temple Adath B'nai Israel complex in Evansville, Indiana.  Rabbi Gary Mazo has been going “ballistic”, claiming that this is evidence of a hate crime designed  to intimidate and silence Jews. The damage is supposed to have been done on a Sunday, the 26th of February.  It was discovered Monday, and reported to the authorities on Tuesday. 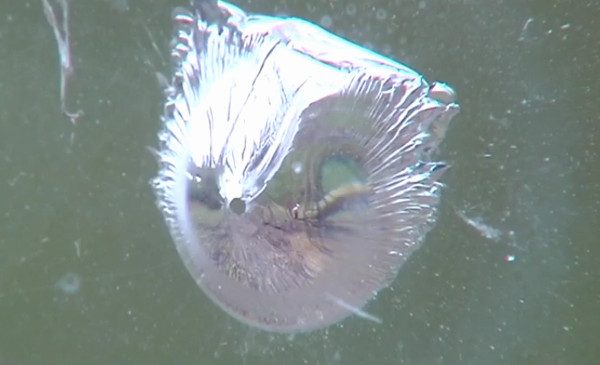 You can see the damage to the window in a close up. It is clearly *not* a bullet hole. The horizontal measurement of the cone is likely about an inch. The hole in the center is almost certainly less than 1/8th of an inch. It is an obvious Hertzian cone in glass, most commonly caused by the impact of a steel BB from the common  BB gun. The actual hole in the center of the cone is mostly round and very small, usually under 2 mm.  I have seen dozens of these sort of impact cones caused by BB guns.  If vandalism is the intention, there are usually many, many impacts. BBs are very cheap, and BB guns are nearly silent. A single impact is likely the result of accident or negligence, but seldom malice.

But malice was immediately conceived of as the obvious intent by Rabbi Gary Mazo. From thehill.com:

A gunshot fired at an Indiana synagogue classroom is being investigated by the FBI as a possible hate crime, according to an Indianapolis Star report.

The bullet pierced a window at the Adath B’Nai Israel Temple’s Sunday school, damage that was discovered Monday amid a wave of bomb threats at Jewish community centers and schools across the country.

Rabbi Gary Mazo, who leads the Adath B’Nai Israel Temple in Evansville, Ind., said he believes the shooter intended to instill fear in the community by shooting at a classroom.

Here is a description of the exact sort of damage that is seen in Evansville. From deltakits.com: 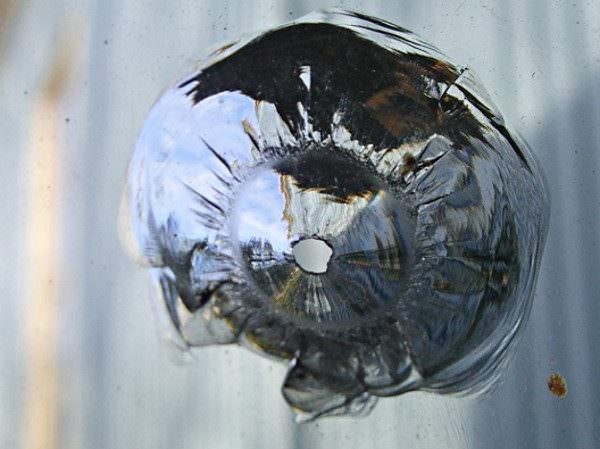 The Evansville police were careful not to call it a “bullet hole. From usnews.com:

Evansville police say it was an act of vandalism caused by a “projectile.”

Rabbi Gary Mazo is now walking back on the idea that it was a  “gunshot” or a “bullet hole”.  From courierpress.com:

Mazo said investigators believe the damage was inflicted by a low-powered weapon, meaning that its unlikely that the incident, in his mind, is anything other than a “cowardly act by a bigot.”

Because anything that happens is evidence of vandalism by a bigot. The story traveled around the world. USAToday carried it. The story was carried by the Israeli National News.  They did not have a picture of the actual damage, so they put up a file photo of a real bullet hole, and labeled it as such. From israrelinationalnews.com: 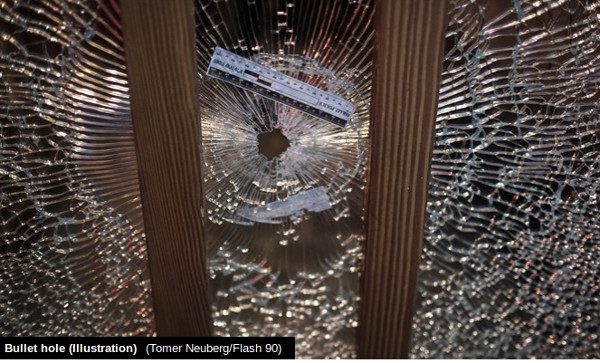 It is more plausible to create a boogey man from a bullet hole than from a negligently fired BB.

I hope Rabbi Gary Mazo becomes educated by the investigators on what real bullet holes look like.  If this incident turns out to be an accident, perhaps the Rabbi will realize that he was foolish to assume the worst.

If it were a hate crime wouldn’t there be MANY holes in MORE THAN ONE window?

This is, as has been suggested, an act of a juvenile lacking adult supervision. That is not a hate crime.

But I condemn acts intended or designed to injure or intimidate Jews.

Looks to me like the impact, the side of the damage with the smaller hole is on the INSIDE of that window… uness the classroom is wallpapered with outdoors green tree scenes…. but in the photo with the damage “in the upper right quadrant”, the classroom walls are a yelowish colour, NOT green. SO.. whatever happened happendd from the INSIDE… so the Rabi ought to be poking his nose about to find out who/what could have caused such damage FROM THE INSIDE. If it WAS from the outside, a small stone from a blade type lawnmower, perhaps a weed waker… Read more »

I’m with DrSique. Let’s not jump to conclusions before all the facts are known. Even if it was caused by a BB gun, chances are good that it was an unintentional (negligent) discharge and not vandalism.

Surely the Leftists in the media were hoping to blame this on Anti-Semitism and Trump’s alleged “extreme right” followers.

I sympathize with the rabbi if it were “my house” that had gotten a hole in the window yes I would be very upset also maybe not even thinking. But I hope this incident does educate the rabbi and he can learn from the investigators as to what happened and I do hope that they find the young person that intentionally or unintentionally did the damage and can move forward from there. The Jewish faith has been attack over the centuries and as an earlier poster said it has to stop.

My house has three windows with this kind of damage . . . at least one predates my ownership. plug the hole with transparent silicone caulk and go on.

You’re right jim. I’ve had the same thing happen at different times. It’s absolutely unforgivable for someone to take any kind of action against the Jewish people, but let’s try not to jump to conclusions over something that is clearly not threatening. It’s hard to tell but that hole looks like it was made from the inside. Interesting. I must point out though that I believe any kind of threat or action against people of the Jewish Faith should be dealt with in a very harsh way, they’ve been persecuted more than enough throughout time. It has to end.

Or a slingshot. Those can be bought at many hardware stores for under $10

that crater could have been caused by the gardener’s weed-whacker or lawn mower flinging a rock. (I was standing next to a car window that exploded from such an event)

Did the exact same thing !
Jeep parked in drive ,
went past on tractor ,
never heard it never seen it
but it took out the side glass
without me ever Knowing.
had to ask my wife if it was
broke when she came home.

The headline is completely misleading. As the article itself says, it’s NOT a “fake bullet hole.” It’s a hole from a BB gun, which to someone unfamiliar with firearms, IS a bullet hole. When you use loaded phrases like “fake bullet hole” there is a clear implication that the synagogue or its rabbi were attempting a hoax or a scam. This is simply a non-shooter misidentifying what weapon was used to terrorize a house of worship.

Mass hysteria is all this creates in the media. The point of some juvenile becoming a hate crime perpetrator is a little over the top. Vandalism, sure, no problem. Cane his butt and fine his parents if he is caught, because that is probably the root of this incident.

The offending “OMG howitzer round” projectile appears to have been fired from the INSIDE of the synagogue.

Much ado about less than nothing.

Error on the side of caution! I’d say accidental or malicious the act is against society and come on, one would be naive to think in this day and age It wasn’t a hate crime. The rabbi was a little off but he just needed to thank God it wasn’t a real bullet.

It is not a bullet hole it is a BB but it is also malice.

Even if it was a BB and it was done with malice, that doesn’t necessarily mean bigotry. Sometimes a kid with an air rifle just goes and does something stupid. Jumping to all sorts of conclusions, before any facts or evidence are known, is completely irresponsible.