Milev (Temple Terrace, Florida, pictured left)) was leading at the end of two days of Qualification with a combined score of 1145. Once in the Final, Milev tied Olympic teammate Keith Sanderson (Colorado Springs, Colorado) on his final series, leaving the Final to be decided in a shootoff. Milev won the shootoff five hits to Sanderson’s four.

Though the outcome of the Finals wouldn’t necessarily determine medals, points from the two Qualification matches, plus points earned based on rank in the Finals were combined to determine athletes’ final placements at these National Championships. 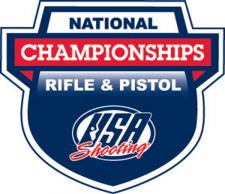 Action at the USA Shooting National Championships for Rifle/Pistol and WSPS-sanctioned match continues through Sunday. More than 350 athletes from across the country have descended on the home of the U.S. Army Marksmanship Unit in Fort Benning to compete for National Championship titles and appointments to the National, National Junior and National Paralympic Teams. More than 30 athletes from nine countries have come to Fort Benning to compete in the WSPS-sanctioned match.

A complete schedule for this match can be found here.

Complete results from the USA Shooting National Championships for Rifle/Pistol and WSPS-sanctioned match thus far can be found here.

For more information on ELEY and their products, please visit their website.

USA Shooting, a 501c3 non-profit corporation, was chartered by the United States Olympic Committee as the National Governing Body for the sport of shooting in April 1995. USA Shooting’s mission is to prepare American athletes to win Olympic medals, promote the shooting sports throughout the U.S. and govern the conduct of international shooting in the country.

Check us out on the web and on Twitter.