Arizona -(Ammoland.com)- Gun turn in events, known by the Orwellian term ‘buyback’ (you cannot buy back what you never owned), have become rare outside of those states which ban private sales.

Connecticut requires that every gun sale is granted permission and be registered with the government. New Haven Connecticut is hosting a gun turn in event.

The New Haven Police Department gun buyback will be at 710 Sherman Parkway in New Haven, from 10 a.m. to 3 p.m. Saturday. People turning in working guns will get gift cards for American Express, Stop & Shop, Target, Walmart, Kohl’s or Amazon while supplies last.

Guns must be delivered unloaded in clear plastic bags and any ammunition must be delivered in a separate bag. The person dropping off the gun will not be charged with illegal possession of that specific firearm, according to police.

They said no questions will be asked and no identification will be required.

710 Sherman Parkway in New Haven is the address for the New Haven Police Academy.

Licenses to purchase rifles, shotguns and handguns are required in Connecticut. Paperwork for the sale or transfer of all firearms is required by the State of Connecticut. 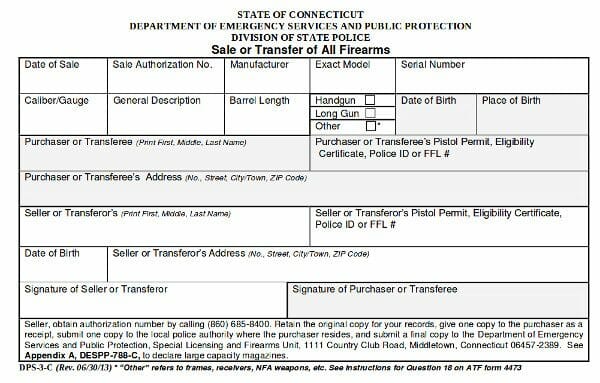 In 2016, the event collected 85 handguns, thirty-eight rifles and shotguns, an SKS, an AR15, and two sawed-off shotguns that were counted as four “assault rifles”. 15 inoperable guns were also turned in.

The gift cards ran out early, and more than a dozen people were turned away. The prices offered for guns are ridiculously low. In any state where people are free to sell and buy guns without government permission, any working single shot or derringer pistol would be worth $75. Working rifles or shotguns would be worth a $100, minimum. “Assault Weapons”, an imprecise term at best, could be worth from $200 to many thousands.

Academics have long written about the ineffectiveness of these events. Only a few places are still having them. In Washington state, public disarmament activists asked politicians to stop them because they were making the disarmists look bad.

From the Freakonomics” web site:

When it comes to gun buybacks, both the theory and the data could not be clearer in showing that they don’t work. The only guns that get turned in are ones that people put little value on anyway. There is no impact on crime. On the positive side, the “cash for clunkers” program is more attractive than the gun buyback program because, as long as they are being driven, old cars pollute, whereas old guns just sit there.

It looks difficult to make a profit at this event. The prices are low. The administrative burdens required to purchase a firearm are burdensome.

It was difficult to find pictures that were not restricted, from the last event.

If anyone near New Haven can obtain photographs from the event this Saturday, it would be useful.

I don’t understand why more FFL’s don’t advertise on the radio or cable tv to buy unwanted firearms on consignment.

Seems like these Liberal Police Department’s have turned themselves into criminal enterprises (operating without a FFL).
Not based on law but based on a belief that they may possibly be taking a gun out of the civilian population that by a long shot could possibly be used in a crime or shooting at some future point. Based on this ideology, what other criminal acts do these police institutions perpetrate?
Connecticut $36 to buy a license to purchase ammunition? Disgusting.

VT Patriot
Reply to  The other Jim

Yep it is ridiculous. But we have few mammoth gun stores like that here in VT, CT has many. I can walk into my favorite store there and see skids full of ammo at very good prices. That, and going thru the CCW permitting jungle last year with my lovely lady to get hers. I couldn’t get an out of state lic because I live in a Constitunal carry state, carry everyday except when I’m leaving VT. Except, don’t have the ‘liscence’ printed on paper. I’m a big proponent of the reciprocity law that’s waiting in congress.

The gun laws in CT are unbelievable. Having a firearm is a constitutional right. Seems like the “constitution state” should drop that moniker since they don’t like it or follow it.

@SK, Yeah the people that own Connecticut could change the name to “Communisticrap”, and the state motto could be “Where Elitists Rule”. Texas is calling. Quietly sell, and bring your family, here. Merry Faith Based Christmas, and a Happy New Rifle.

Years ago there was a gun buy back program in New Mexico and several of us made money turning in junkers and parts guns. There were a couple of people in the parking lot buying guns for $50 more than the cops and they made out like bandits. Some of us made enough turning in $10 junk for $50 to buy a bunch of ammo or put a good deposit on a new or used gun. It was a classic case of making lemonade out of a lemon.

Dean, one little thing. CT also requires a state license to purchase any ammunition. This ‘license’ costs $36 and is available at the CTSP offices. SInce CT has a few great gun shops, I always stop at one when I’m there, show my license, buy some ammo, and walk out. The only problem is hiding it in my car so I can drive thru Mass on the way home. I always put it in a locked ammo box in the trunk so at least I have a chance of getting thru the state to VT.
Moronic..

Would be curious to know who turns in the most guns, little old ladies or gangbanger types.
They certainly don’t know the value of the guns that were in the picture, idiots!

These programs are illegal if it weren’t run by a government agency. In connecticut you must have a permit to carry pistols land revolvers in order to purchase a handgun or a long gun permit that allows you to buy rifles and shotguns; the permit to carry pistols and revolvers allows purchase of handguns, rifles, shotguns and ammunition. In connecticut you cannot carry any firearm unless you have the proper permit; you cannot buy any firearm “legally”, unless you have the proper permit. That said, The New Haven Police Department does not have an FFL, since none of the people… Read more »

Seems like, with prices that low, the only way to make a profit is to get the firearm for free. Local government creating a market for stolen property, and receiving stolen goods. So… do the bureaucrats fence it, next?