U.S.A. –-(Ammoland.com)- As a former police officer in the City of New Orleans, I saw, first-hand, where things can go terribly wrong! After a hurricane, the City and State opened up the Louisiana Superdome as a shelter to help those who were forced from their homes. What ensued was chaos! A small group of predators were in the shelter and perpetrated crimes against those who were down-and-out. Rapes, robberies, assaults…you name it! Those people DESERVED to be able to protect themselves! This can happen tomorrow in Texas!!!

Excerpt from an email from GOA

Have you heard about the “Constitutional Carry for Disasters” bill? It was close to finally passing — but the Senate completely gutted it. And if we don’t get it fixed in the next day or two, we might be stuck with their version or stuck at an impasse.

I need you to call as many of the lawmakers as you can to help us make at least a very small step forward TODAY before the session ends in only 3 short days!

Please call as many members as you can on the Conference Committee on HB 1177. It only takes a few seconds per call. A staff member or intern will answer. Say something like this:

“Hi, I’m a member of Gun Owners of America and I’m calling about HB 1177, Constitutional Carry for Disasters. Could you please ask the [Representative / Senator] to only accept the strongest version of the bill in conference committee? We need to add back in what the Senate took away and pass at least the same version that the House passed. Thank you!”

This spring, the Texas House decided that they could give us a tiny sliver of what is rightfully ours: they passed Constitutional Carry for Disasters, HB 1177.

This bill would allow people who legally own a handgun to carry it without a permit when evacuating from a declared disaster zone or returning afterward — for up to a week after the disaster.

The bill also allowed for carrying a handgun in a place that would normally be a “gun-free zone” if the place was being used as an emergency shelter and if the carrier had permission from the person running the shelter.

Well, the Texas Senate apparently thought that was too much freedom for Texas to handle. Chairman Huffman refused to hear the bill until it was completely gutted. The Senate’s proposed version would allow permitless carry only for those evacuating in a mandatory evacuation — and only for 48 hours after the disaster!

And the Senate removed any provision about carrying in a “gun-free” zone.

But we have a tiny window in which to try to fix the bill. Since the House and Senate passed different versions of the bill, members of each chamber are coming together in a Conference Committee to try to agree on a wording.

Please don’t delay! Call as many of the legislators as you can on the HB 1177 Conference Committee and ask them to agree to the strongest version of the bill! 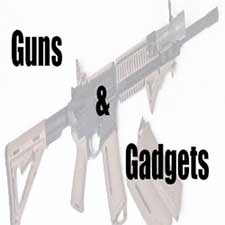 With over 20 years of experience in the law enforcement field, I have learned the numerous channels used by those who would love to see our 2nd Amendment rights stripped. Because of this, I am often able to bring you the news on new bills submitted at the local, state and federal levels that look to carry out those attacks. If you are new to the channel or want to stay up to date with the constant infringements on our Constitutional Right to Bear Arms, please subscribe to my YouTube Channel at www.youtube.com/GunsGadgets

Why is it that “As a former New Orleans police officer” he doesn’t mention that during that hurricane disaster period law enforcement LITTERALLY went door-to-door confiscating legally owned guns?!!! And police KEPT them!…With all the talk of gun control going on nowadays nobody ever brings that up…smh

I’ve mentioned it several times actually…Check out my channel

I remember that movie “Dirty Harry” where Clint was a cop and was after that psycho who buried the girl in box. Now days that psycho is in office and has disarmed USA. Bootlickers comply.
Charles Manson used to freak everyone out now he’s on every screen in America running for office.

So, you’re saying you need a law to use 2A because you must ask permission from your mommy to defend yourself? Seems to me that if a person is going to surrender their rights to be caged with animals in a Superdome of Mad Max chaos then maybe you really need a law that people must be smart. Face it, you don’t even have a 2A and you straight up know it. How stupid can bootlickers be to think 2A exists when the police are pushing a law so you can use it. Rule of thumb for stupid bootlickers, DO… Read more »

och will
Reply to  Rocky Mountain

Just what Amnerica needs ! More handguns and rifles owned by “law abiding” gun owners. Thanks !!! I feel really safe and free now. I can hardly deal with all this “freedom” gun whackadoodle. Americans own 300 million guns. We have the worst per capita gun violence rate in the developed world. Demanding Americans get the “right” to carry more guns into more places is like praying for rain tin the middle of a thunderstorm. Bonehead. Take your fake gun culture facts and stuff ’em, rambo.

Andy
Reply to  och will

Och, YOU are the idiot by selecting your God given right to self preservation be handed off to government bureaucrats rather than retaining the right to protect yourself and your family. WHY in the world would you not want to be able to make that decision for yourself?

Get Out
Reply to  och will

Och, does your therapist know you’re having mental issues and can hardly deal with all this “freedom”? You should instruct them to register your mental state with LEO and NICS to place you on the prohibited list so you can’t purchase a firearm, consider the no-fly list too?

BTW, still waiting for you to tell us when were you were ever issued a semi-auto infantry rifle in the Corps.

och will
Reply to  Rocky Mountain