Washington, D.C. –-(Ammoland.com)-The Supreme Court of the United States has rejected the appeal of two Kansas men charged with various violations of the Nation Firearms Act of 1934. SCOTUS will not hear their case, Kettler V. United States.

The justices did not offer a reason to why they will not hear the appeal of the men who acted within Kansas law, but outside federal regulations. Attorney Generals of seven states joined the men in urging SCOTUS to hear the case.

Jeremy Kettler, who is a disabled Army veteran, purchased a suppressor from a military surplus store run by Shane Cox to protect his hearing. Kettler damaged his hearing while fighting for the US in the military. He wanted to prevent further damage to his eardrums.

Cox assembled and sold the suppressors in Kansas. Cox believed what he was doing was legal since the suppressors were not sold to out of state residents and marked as “Made In Kansas.” He assured Kettler that was not a violation of the law to own the unserialized suppressors as long as it did not leave the state.

The men believed the Kansas law known as the Second Amendment Protection Act protected them from the National Firearms Act, much like states have been making their own immigration and drug laws that run afoul of federal law. Kettler uploaded a Facebook video on the device which caught the attention of the Bureau of Alcohol Firearms and Tobacco (BATF).

They would appeal to the Tenth Circuit Court of The United States. The court would uphold the conviction. The men appealed because the lower court did not allow them to use the Second Amendment Protection Act as a defense. They also argued that the Second Amendment applied to suppressors and other gun accessories.

Another issue in the case was the National Firearms Act of 1934 (NFA) itself. To own a suppressor in compliance with the NFA, gun owners must pay a $200 tax stamp fee. Legal scholars have argued that it is direct taxation on the right to bear arms.

In Murdock v. Pennsylvania SCOTUS ruled that Pennsylvania could not tax a right. In the case, a Jehovah’s Witness was soliciting donations for literature door to door. The state imposed a licensing fee on the missionary which SCOTUS ruled was unconstitutional since it was a direct taxation of a right.

Gun Owners of America (GOA) back up the Kettler going as far as setting up a legal fund for the disabled vet. Erich Pratt, the executive director of GOA, expressed disappointment in the court’s decisions.

“The decision by the Supreme Court to deny cert in the Kettler case is deeply disappointing,” Pratt said in a released statement. “Jeremy Kettler was a victim of Eric Holder’s Justice Department, who prosecuted a disabled veteran for a ‘crime’ where no one was hurt, injured or killed.”

SCOTUS has been hesitant on taking up gun cases since the landmark Heller decision against Washington D.C.’s DeFacto on handguns. The court ruled that the right to bear arms is an individual right, and D.C. was violating the Constitution.

Since that decision, SCOTUS has only taken up one firearms case. In New York State Rifle & Pistol Association Inc. v. The city of New York, the NYSRPA is suing the city over their firearms travel ban that prevents residents of NYC from taking their guns outside the city even if it is to a second residence. The court is expected to hear oral arguments in the fall.

“….SCOTUS has been hesitant on taking up gun cases….” LOL! Those 9 magpies in robes have proven, time after time, that they are FAR short of any claim to the ACUMEN of those Founders that penned that 2nd Amendment. They, at best, are anemic academics. Consider their ‘infamous’ latest “ruling” on ‘We The Serf’s’ right. They unconstitutionally amended the Amendment by adding “HOME” as the place people could “Keep and Bear Arms.” It takes ANY of these current “scholars and scribes” at least twenty pages, or more, to state what that ‘One Sentence’ 2nd Amendment says. The “Establishment,” which includes… Read more »

the endowed by our creator language would be the Declaration of Independence, not the Constitution.

We can thank Hollywood for brainwashing society and the government about how quiet suppressors are but aren’t. It always amazes me how stupidly uninformed people in authority make decisions on something they know absolutely nothing about. 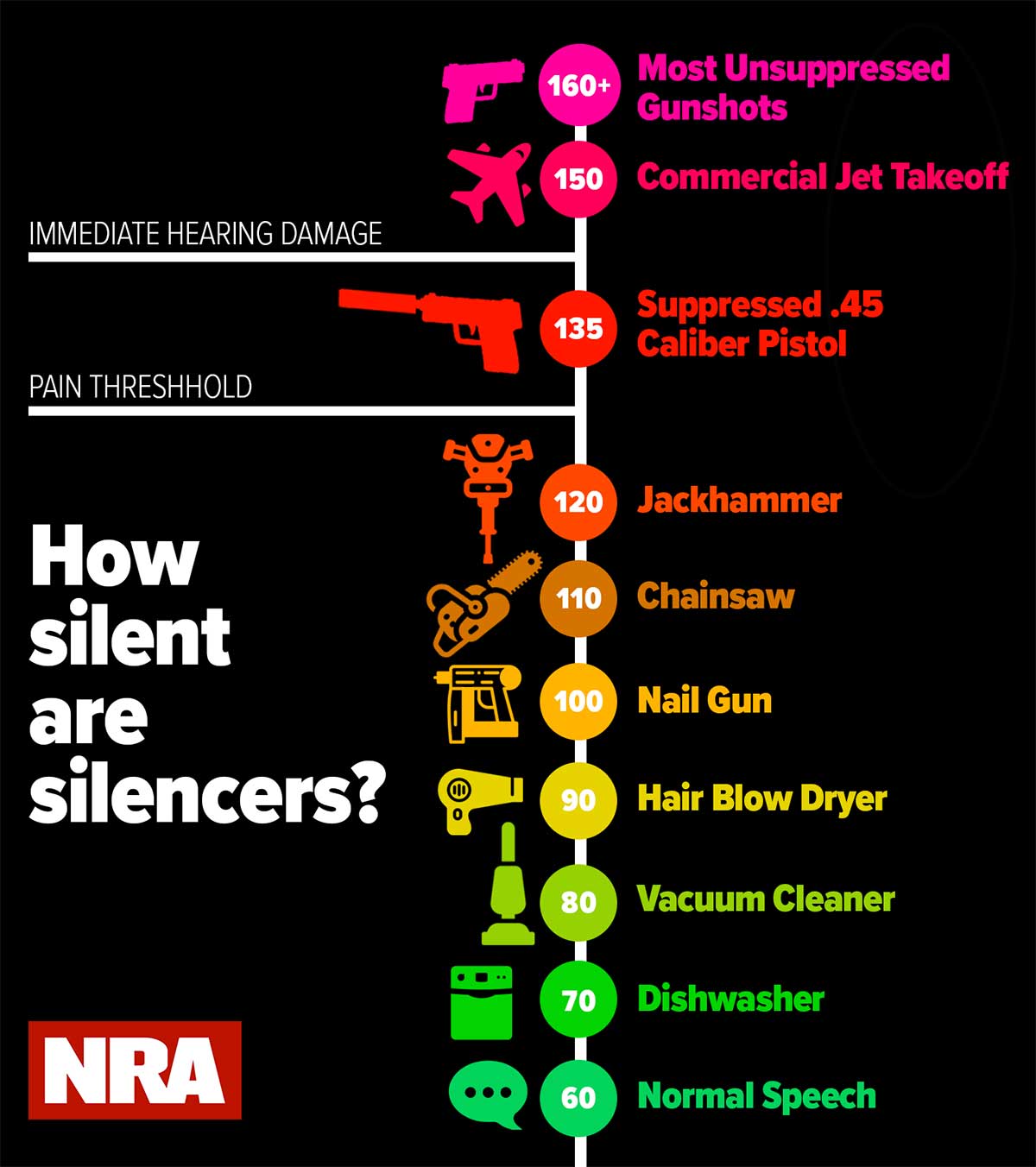 JimK
Reply to  Jack B Quique

A little surprised since the addition of Gorsuch and Kavenaugh should have lent itself to this issue.

They are avoiding this because they would have to admit that the NFA is unconstitutional and everyone who was forced to pay out $200 for their bogus permits would sue for the fee and interest! Remember Roberts is a turncoat, he’s about as conservative as the Bushes are – can you say RINO!

@Rattler, I’d send her a case of cigarettes, if I thought that it would help.

Each justice receives cases to determine whether they will hear it or not. This case had to have landed on the plate of one of the marxists sitting on the bench. I know that 4 justices (Alito, Gorsuch, Kavanaugh, and Thomas) would have granted certiorari.

DH
Reply to  Jack B Quique

Nothing good ever comes from social media

Can’t look to the government to secure your rights. You need to take and defend them by force. This was a very simple principle the Founders understood.

Correct.
If we don’t defend what belongs to us then it will be stolen like anything else of value that others desire. Founders said the nice thing about 2A is you won’t need it until they come to take your guns then it will be handy to have.
Use it or lose it!

SCOTUS won’t hear it because the whole act is unconstitional and they know it.
“States rights vs. Federal law? Sounds like work, lots of paperwork. …and I have to be at the golf course by 4:30!”

Correct.
They refuse to pull the end of that thread because it will open the door to freedom of which they strongly oppose like good tyrants.
Trump & Barry are relieved. Salt & pepper tyrants for selection to cover both bases. Can have the white tyranny or the black tyranny but it’s all tyranny. And they thought we were fooled.

And Ginsberg needs her next embalming fluid transfusion at 3:45

Don’t worry, change is coming and it is not the change the USSC desires.
Things are happening.

The founding Fathers forgot to add a stipulation that future generations of law makers must be able to read and understand the Constitution! RH

What they should have included in the Constitution is that any SCOTUS justice or law maker that in anyway creates or supports an unconstitutional law should be immediately removed from office. They also should have added that ALL laws and Acts created by legislators must go to SCOTUS before being enacted into law, to ensure it complies with the Constitution. If this were so, SCOTUS wouldn’t need to hear so many obviously unconstitutional cases.

This is a shame, it was an opportunity to get rid of these Draconian anti-gun laws.

I smell rino Roberts all over this. They knew if they took this case they would have to rule for the state and it would have gutted all the abuses of the Interstate Commerce Clause the system has put in place through the years.

It’s like I always say, and always will, these people come from a different genre pool. They all grew up in different environments than we did. Most were likely from wealthy families and are generally just better than us. They’re not of the people, by the people or for the people. Never have been, never will be. They see things differently than us. They’re fools. They ALL believe IT could never happen here. IT needs to happen almost for them to even begin to believe that the 2A is real. They’re not on our side, HE is not on our… Read more »

SCOTUS is worthless.
The NY case will most likely decent into oblivion.

Anyone expectingthis huge surge in 2A and choice cases bring heard are in for a surprise; Clarence is hte only one pushing for that, the rest will use hte typical caution SCOTUS exhibits when deciding what cases to hear.