U.S.A. –-(AmmoLand.com)- When production began on the original version of the Kriss Vector in 2009, the originality of the “Kriss Super V” recoil mitigating action promised to reinvigorate a SBR/PDW market that had been largely phased out by agencies adopting short carbines instead.  While the resulting “splash” in the marketplace wasn’t as revolutionary as the folks at Kriss may have hoped, the years between then and now have seen significant refinement and expansion within the Vector lineup.  Now a few years old, I’m reviewing the Kriss Vector SDP-SB, one of their braced pistol versions of the Vector, chambered in .45 ACP.

We’re going to dive into range results with the Kriss Vector SDP-SB (Special Duty Pistol, SB Tactical brace), but first let’s check out the tech specs on this gun, as provided by Kriss:

Getting the SDP-SB ready for the range, I strapped on a Primary Arms SLx MD-25 red dot, and loaded up a few boxes of HSM 230 gr FMJ’s.  This is a good red dot with a wide field of view, well suited to my preference for such a gun.  The ammo is re-manufactured from Hunting Shack Munitions, of which I still have a couple thousand rounds left from when I closed my gun shop to move out of state.  It’s reliable ammo, and shoots more accurately than I usually expect from budget ammo.

I did a few dry fire drills to get used to the ergonomics, which are like a “greatest hits” compilation of so many guns that came before it.  The charging handle is forward and left (much like the Mp5), but also folds forward when not used (like the G3).  The mag release is on the left side of the magazine well, right next to the bolt hold/release paddle.  While there’s a forward picatinny rail section for forward grips/finger stops, it’s clear the team designed this gun to be held with the support hand on the magwell.  The safety is in the same region as nearly every PCC/subgun has put it in the last 80 years, easily reachable by the firing hand’s thumb.

So out to the range I went with the SDP-SB in tow.  I got a rough zero at 8 yards, then pushed the target back to 15 yards for a tighter zero and a couple groups.  Another couple groups at 25 yards, then some reflexive fire on a CTS steel mini e-type target.  All groups were shot from a standing position, which isn’t optimal of course.  Still, I was happy with the below results: 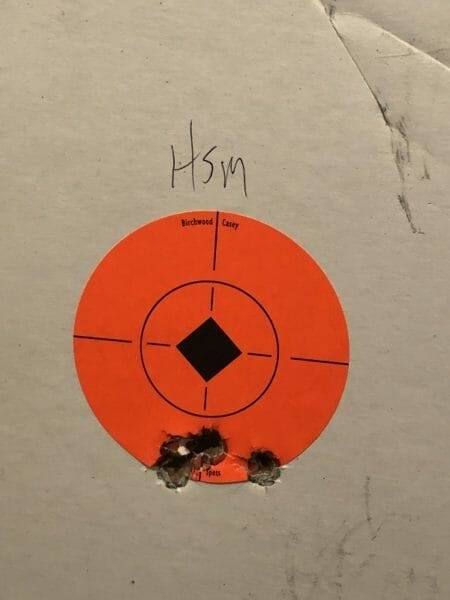 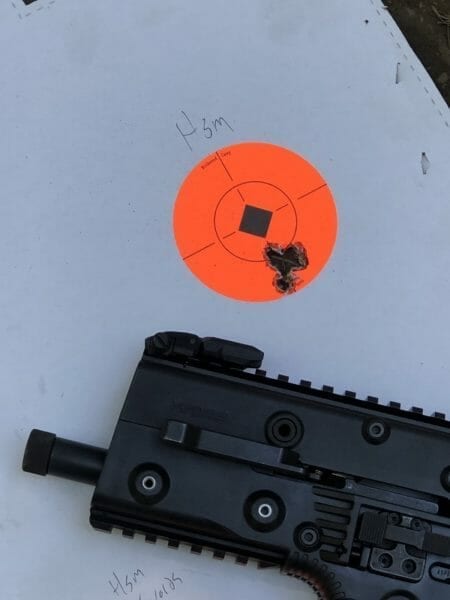 What’s it like firing the Vector?  Well, there’s something to that Super-V firing system all right.  Not that one really expects a lot of recoil from a .45 ACP braced pistol, but this is a pretty efficient system.  The gun doesn’t recoil so much as it pulses in your hands… kind of a mild concussive force with a minimal amount of muzzle rise.  The unusual recoil pattern makes it more difficult to perceive the last round bolt lock, but with practice, it’s there.

I was surprised to find this gun has a hell of a muzzle blast, far more so than any of my .45 ACP chambered handguns.  Likely a byproduct of the unique firing system, but easily remedied right?  Silly I hadn’t read the barrel thread pitch specs before hitting the range, so call me surprised to find a left-hand twist metric thread pattern instead of the 5/8×24 more commonly used.  No quiet time for me, but still one hell of a fun gun.

That muzzle thread is my one big gripe with the SDP-SB.  I could point to the weight as well, but that one is a little more understandable than an American-made gun sticking with a metric thread pattern

The Kriss Vector series of guns brought a new and innovative operating system to the firearms world.  Kriss is continuing to refine the system, which is already an effective method of mitigating recoil.  I’d really like to see them bring the shelved Kriss KARD pistol out, showing that the Super-V recoil system isn’t just a pistol caliber carbine one-trick-pony.  I think the system shows great promise and potential beyond where it’s currently at, but I digress.  The Kriss SDP-SB is an effective and fun way to sling pistol caliber rounds downrange.  This is a unique addition to nearly any collection.  The SDP-SD as shown has an MSRP of $1519, with a street price that has varied wildly as of late due to the pending election season.  If you’re in the market for a little carbine/pistol/subgun in a pistol caliber, the Kriss Vector series is a pretty potent package.  Just make sure to get a few of the 30-round mags so you can keep the fun rolling.  Check it out!

Was looking at the pics and was like WTH is Trailer Park Boys doing reviews on Ammoland? Rex looks like Julian behind that Vector! Thanks for putting down the drink to do the review! 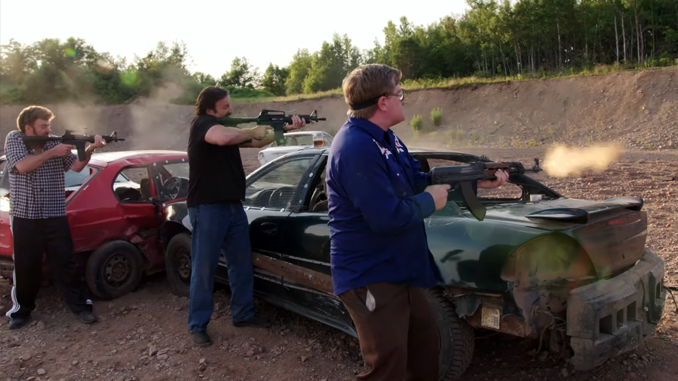 Ha! Of the three, I’d take being likened to Julian over the rest

I’m sorry but I’d be less embarrassed to have a Lorcin 9 in my hands.It makes HiPoint pistols look sexy af.