Judge Barrett’s record demonstrates a steadfast commitment to the fundamental rights enshrined in our Constitution. With this nomination, President Trump continues his record of nominating qualified, fair-minded federal judges who respect the Bill of Rights – including the Second Amendment – to our nation’s highest court. ​

Yeah, that makes me feel kinda uneasy, too.

When Negotiating Rights Away backs anyone it should give a person reason to pause about that recommended person.

Yeah, they also, in their current “America’s First Freedom” magazine this month, say that RINO Trump has kept his promise to defend 2A on all fronts….meanwhile, RINO Trump has actually done more gun control than Obama, and still wants more.

I used to be hard on Trump but anyone at this point who attacks him must be a liberal. Trump is the only pres of last half century at least that actually has greatly restored the constitution after decades of Tyranny. At that after evisceration of the constitution & especially considering hes been fighting off a coup. And amy Barret is a strict Constitutionalist not a right wing hack,theres a difference (even though I want her as far right as possible)

Last edited 2 years ago by Relic
2

Wrong answer, cultist. RINO Trump has done MORE socialism and gun control than Obama, and he still wants more. How can you sit there and say he has restored the Constitution, when the size/scope/cost of government has increased so bigly on his watch, beyond Obama levels? What parts of the Constitution has Leftist Donnie restored? What coup? Do you know the definition of coup? What kind of coup goes through a process spelled out in the Constitution and results in him keeping power based on votes? You cultists are really gullible. Barrett is a liberal in conservative wrapping: she rubber… Read more »

I do not fear or distrust her because of nra endorsement. They waited until Trump selected a nominee, and then endorsed. They would have endorsed anyone Trump selected. As @PS said, they’re there for a free ride, to “prove” their power for doing nothing. @uncommon – Barrett May not be perfect, but she’s about the best we could hope for. Trump has his issues, but his primary opponent would destroy our country. As they say in engineering, perfect is the enemy of good enough. I believe military equivalent is something like “a reasonable response on time beats the perfect response… Read more »

On the packing the court question. The Legislative branch can pass a bill to increase or decrease the size of the Supreme Court at any point if they have the votes. It has been done many times in the past. All it takes is for the legislation to become New Law is for the President to sign said legislation. The Supreme Court has no Jurisdiction to decide Up or Down because the number of Justices on the Court is determined by the Legislative and Executive Branches, There is no prevision in the Constitution dictating it’s size or make up. That… Read more »

Wow that second to the last paragraph is a perfect description of obummer.and O”liden will fit the same bill.

So half-wit Biden would do better? Grow up.

1) Criticizing LEFTIST DONNIE does not = Biden supporter. I hate all leftists. And unlike you, I do not support leftists.
2) RINO Trump has done MORE gun control than Obama/Biden in half the time, and he still wants more.

To that second point, I had one moron defend RINO Trump by saying, “well that’s because Republicans stopped Obama from doing all the gun control he wanted.” To which I replied, “I see, so who is stopping RINO Trump from doing more gun control than Obama?” Crickets.

All good points for sure we could do alot worse though dontchathink? Ya know like Biden /Harris talk about anti 2A.

Last edited 2 years ago by SEMPAI
-1

She’ll spiffy up the Court in spite of those Goatgfaces Soto and Kagan. The Boys on the court ought to be pushing for her confirmation.

The dems will pull their same play book during Barrett’s confirmation hearing – like they did against Bork and Thomas. Who was the Chairman of that committee, yep Biden, the other half of the Harris Biden Presidential ticket.

Once confirmed however and seated on the Court, we then shall see how this new conservative leaning court rules in bump stock and red flag law cases that will come before them, especially in light of the fact Trump supports both infringements.

So, until then, the jury is still out regardless of what the Negotiate Rights Away alludes too!

Be thankful that Bork was Borked. He is very anti-gun.

If JFK was running for office today he wouldn’t get far with the Left as he was of Catholic faith, just think about that!!!!!!!!! 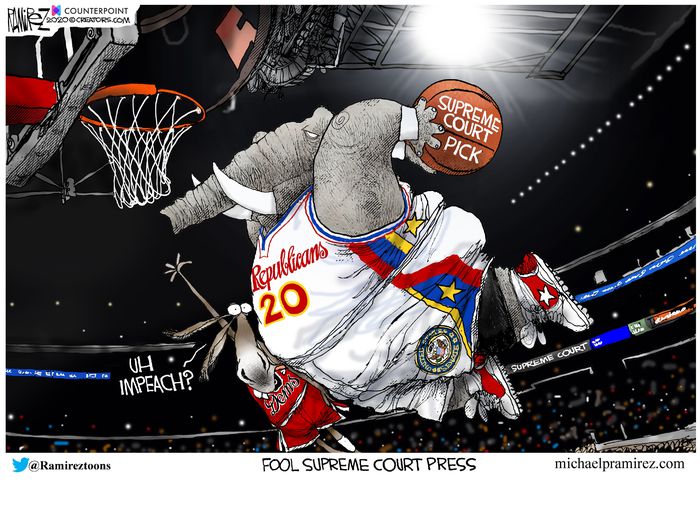 Barrett seems to be a good pick only time will tell. Hey NRA is WLP still there, if so no money from me.

Let’s hope her name is not on any of Epstein’s flight logs.

Barrett appears to be a good choice, and it looks like LaPierre see a chance for using her nomination to make more $ and stay the “corruption course” for personal gain, or he’d not permit his minions at NRA-ILA to support her.

Now the democrats will do their best at slamming this woman and the media will be right there leading the charge.
Trump has been a good president with his picks for the court, just think what would have happened if Hillary had been elected instead of Trump, we would all be sounding like chicken little with the firearm grabs that the beast would have pulled on the American people.