U.S.A. –-(AmmoLand.com)-— A few days ago, this correspondent wrote about the upcoming gun turn in event scheduled for Fort Worth, Texas. Police were offering $100 gift cards to people who turned in working firearms. As predicted, the police quickly ran out of gift cards. The event, scheduled for four days, ended in three and a half hours.

The private buyers did not run out of cash. They got some pretty good deals. C.J. Grisham, who founded Open Carry Texas spoke to a reporter.

“So we wanted to come out here and get some good deals,” Open Carry Texas President and Founder, CJ Grisham said.

Right outside of the event there was a group of people who were able to offer cash and buy guns themselves.

“We offered them $100 in cash, instead of one hundred in gift cards,” Grisham said. “And if they were just going to take it in there we might increase it a little bit but I think the average price we paid was maybe $150 today.”

Grisham said majority of the people they approached accepted his offer. CBS 11 asked Fort Worth police about guns they hoped would be taken off the street, remaining in the community.

The police said the private buyers were within their rights to make offers and purchase guns themselves. The private buyers purchased about 30 guns, according to Grisham, at an average of about $150.

From the image shown on the video, the private buyers did well. The firearms purchased appear to include an SKS rifle, a double barreled shotgun, a Freedom Arms mini-revolver, a Remington semi-automatic centerfire rifle, an Explorer II .22 pistol,  a Smith & Wesson Scandium revolver, and many more.

The police showed an image of 107 firearms they accepted in exchange for gift cards. Included in the guns turned in was a classic model 12 Winchester shotgun, a Colt revolver, and numerous other rifles and shotguns. As expected, there was the usual assortment of inexpensive pistols, single shot shotguns, and .22 rifles. One of those appeared to be a Marlin lever action model 39 in good condition.

Most of the guns turned in were worth more than $100. The Model 12 Winchester usually goes for over $400. A model 39 Marlin would easily bring $400. There appeared to be an antique Smith & Wesson model 3 top-break revolver. It might have been worth over a thousand dollars.

There was at least one air rifle. Air guns and blank pistols may help account for a slight discrepancy in the reporting of the number of firearms turned in. Some reports state 112 guns were turned in to the police. 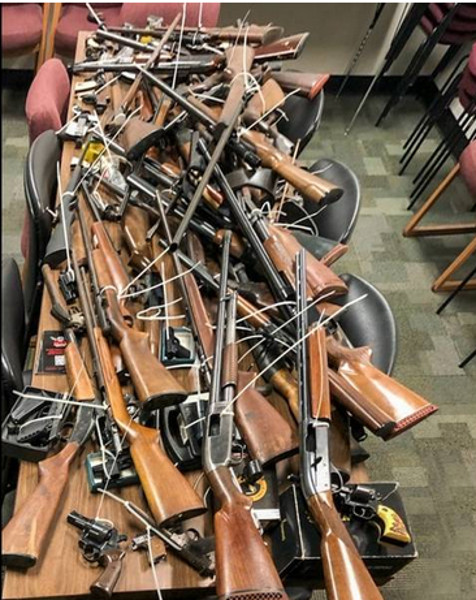 “Maybe was inherited, maybe just lying around. They had no use for and they didn’t want it to fall into the wrong hands or the hands of a child,” said Carabaja. “We respect everybody’s rights, everyone that
came in here voluntarily and they got something out of it.”

Officers planned to collect weapons for four days. But they run out of gift cards within hours, collecting 112 handguns and rifles of almost every make and model, according to police.

None of the funds used to purchase the gift cards came from taxpayer money. The program uses confiscated monies for gun buyback events.

One of their goals is to keep weapons like these out of the wrong hands.

The academic response to these sort of events is uniform. They do not work to reduce crime or suicides. The only plausible effect is propaganda, to send a message to the public: Guns bad. Turn them into the police. The private buyers countered that message with another: Guns are good. We pay Cash.

Some AmmoLand readers were considering attending the Fort Worth event. Comments from those who attended would be a welcome addition to our information about what happened at the event.

Let’s talk about history repeating itself. Large collections of private arms just like these were taking place in 1940/1941 here in the States when the US GOVERNMENT was wanting to help the plight of Great Britain, who were looking at a very good chance of a Nazi invasion. The Brits had earlier decided that they were “too smart and too civilized” to allow private arms in the hands of the everyday citizenry, or shall we say “subjects”. That was reserved for certain nobility. They were sweating quite profusely at the real possibility of an invader with which the people had… Read more »

Not a single firearm was ‘taken off the streets’, they were inside the homes of law abiding citizens. Will some of the rifles or shotguns be destroyed or just disappear and end up in the collection of one of dept officers?

Lol, wish I had an FFL so I could do the same thing.

It used to be that way two years ago in OreGONEISTAN. Glad Texas still remains free.

Private gun sales should be legal nationwide and not just limited to certain states.

Constitutional carry should be in every state and reciprocity should not be needed.

I sure agree with that ! People should be able to travel to any state and not be concerned about being in violation of their socialist,unconstitutional gun-grabber laws. I sure hope the current SC will eventually rule on this.

Good article. For the record, WFAA has a good weather program; but all the redt of their reporting sucks goat azz. So much far left liberal and warm touchy-feely, they might as well be NPR.

Last edited 1 month ago by Oldvet
1

good luck with that,

The Crimson Pirate
Reply to  Arny

SARCO is another good place to try, but a search didn’t turn up anything “Sportco” Could that be a branding thing, and the gun the same as something with another name or actually produced by another company? The reason I ask is that a search on SARCO tosses up a Sako .22 Hornet mag, and a search on Numerich produces a lot of High Standard stuff.

Oldvet
Reply to  The Crimson Pirate

CP… Good bet I used to have a Proctor and Gamble model 26 (hardware store gun) which in reality was a Stevens model 416 .

or added to department guns

Does anyone have concern that they are buying stolen property, or a gun used in a crime? How do you prove you were just a motivated buyer vs. accomplice? I guess that gun stays in one’s collection forever?

Guns were NOT “taken off the street” since I can’t imagine gangs or criminals turning in their weapons. These firearms came from someone home who no longer wished to own them. This is an important different in reporting firearm events in a positive light. Better to say “unwanted” or “used” firearms.

Now that’s the way to keep the good guns out of Government hands ( Police), and in the hands of responsible gun owners who were looking for a deal.

We bought all the good guns and FWPD got nothing but unwanted crap. Most of it was either broken or rusted. lol Meanwhile, I got some good pistols (and almost an SKS).

That’s great. I’m really going to try and get to the next one and see what kind of deals we can pick up too.Almost the SKS ?

I’m Envious. Seems like everytime one of these events comes around, I’m always broker than the Ten Commandments.

Based on the photo, that’s not true. There is at least one semi-auto 12 ga there (looks like possible a Remington) that looks to be in “like new” condition. Somebody missed that one, and I’m sure there are probably a few others (as Dean mentioned).

Probably Elmer just wanting to make sure them nasty Texans do not get Grandpa’s shotgun. Better to have it destroyed or turned into a tomato stake. Have a RG .25 found in a house I was working on. Missing parts but $100 would be more than It’s worth. Just waiting for the right buyback, not 6 gallons of gas!

The Crimson Pirate
Reply to  CJ

Ft Worth PD thinks it owns confiscated cash, not the taxpayers. Revealing mindset that has gotten many citizens murdered for “asset forfeiture”.

I thought it was a crime to use stolen money to buy firearms.

Last edited 1 month ago by Boom
3

Fort Worth never sold the firearms in the first place how could they buy them back. What they are saying,using a twist on words is hand in your guns and we will give a little money for your trouble.

Gift Cards for Gun those guns in the photo are nothing but hunting firearms owners should take them to a local gun shop and get full value for them.

Sorry the police can not be trusted they continue to prove that daily they are doing what the elected in that local municipality are asking them to do.

Calling these “gun buy backs” is equally ignorant as one of the gun-grabbers favored terms “gun violence”. I’ve read articles where they say gun violence at least once in every sentence of a paragraph.

John… Wonder how many of those guns went home with a police officer ?

None
Reply to  Oldvet

More than a couple I’m sure

You know the good ones did

The PoPo are employees of the City Council, therefore they will do what City Counci wants regardless of the Constitution. Same with the State Stormtroopers.