U.S.A. –-(AmmoLand.com)- Do you know that Iowa is one of only six states that do not recognize our precious Second Amendment rights in their constitutions? It may seem hard to believe, but Iowa, which adopted “shall issue” Permits to Carry Weapons in 2010 and became a “constitutional carry” state in 2021, shares that dubious distinction with California, New York, New Jersey, Maryland, and Minnesota.

The Iowa Firearms Coalition, Iowa’s only effective gun-rights organization, has been hard at work for years to get this fixed! Amending Iowa’s Constitution is no easy task. Dean Weingarten wrote an Ammoland piece HERE laying out the context of the Constitutional Amendment. The course is long and there are many hurdles and pitfalls along the way.  The local Iowa government’s attempt to silence groups like the Iowa Firearms Coalition was reported by Ammoland HERE and HERE.  But the good news is that what the IFC calls the “Freedom Amendment” has now passed two consecutive Iowa General Assemblies and the issue will be on the ballot for Iowa voters to decide despite attempts to thwart the survival of this crucial civil liberty.

WE NEED YOUR SUPPORT.  Flip the ballot over and vote for Iowa’s Freedom Amendment.

IFC and NRA-ILA are partnered to bring this vital protection full circle.  They’ve been working together on this for nearly 12 years.  The same folks that overturned the lead ammo ban, repealed the loaded magazine ban, legalized suppressors, SBR, SBS, legalized stun guns on campus, along with the monumental “Omibus Gun Bill” that included standardized carry permits with ultra-low fees and no hassles, protected private property shooting and ranges, repealed the ban on youth shooting, added Capitol carry, Hunter Safety training, and Stand Your Ground are committed to getting this over the finish line. 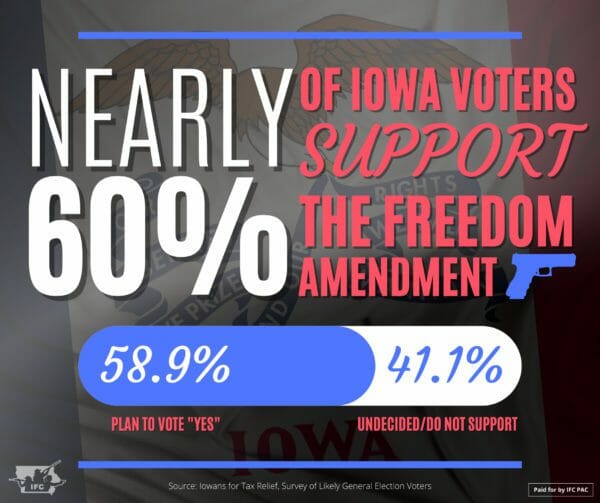 Do you need a list of recent accomplishments and bad laws struck down?  Find that list HERE.  Iowa is rocketing to the top of “Pro-Gun” state lists, and polling shows strong support, but this Amendment has to succeed and there won’t be time to rest until after the election.

Read up on the fight, get engaged, and download images to send around to your friends and neighbors by visiting the Freedom Amendment Landing Page.  Post them on social media, email them, and spread the word far and wide.  Iowa NEEDS your support.  Flip the ballot and vote YES for Iowa’s Right to Keep and Bear Arms.  #2A4IA

Michael is a Christian husband and father to two children. He owns and operates Controlled Chaos Arms, a premier custom weapons shop in the Midwest. He serves as Chairman of the board of Directors at the Iowa Firearms Coalition. The pursuit of truth drives him in research and his writing.

Michael enjoys shooting, hunting, and fishing throughout the Midwest and Rockies. An avid outdoorsman and tireless supporter of all Second Amendment virtues, he can be found in his gun shop, in a tree stand with his kids, or on Capitol Hill lobbying in support of Freedom and Liberty at any given time.

May the force be with you!

We appreciate all your hard work to get this done.
We are all rooting for you this cycle.

It’s sad that this even has to be a fight.
This Should fall under the US Constitution and be protected in all US states by the 2nd Amendment.

One can only hope that one day all the states have no restrictions on the 2nd.