U.S.A. –-(AmmoLand.com)- “The only easy day was yesterday.” One of the most commonly repeated mantras of the Navy SEALs, it’s a quick reminder of life’s daily challenges and Tactical Game competitions are certainly no exception. To be accurate, there are NO off-seasons for Tactical Games, just missed sea-to-shining-sea opportunities if you are not on the ground running and gunning your way through stages somewhere. Tactical Games events provide year-round opportunities for athletes to compete – great for me because I had the opportunity to spectate at another yet altogether different competition recently, a Tactical Games Sniper Challenge.

The Sniper Challenge is a two-day competition comprised of individual and two-person shooting teams and consists of nine or more stages distributed throughout a continuous long-movement course. Each stage can easily cover several miles, depending on the venue. The first day of the Sniper Challenge consists of long foot movements, like operations. During stages, competitors stop and complete tasks, including target identification, and engage long-range targets under time constraints and/or physical duress.

Open Division: This division is for individual competitors interested in the shooting side of the Sniper Challenge but prefer to (or need to) skip exercise elements. In Open Division, no fitness movements, plate carriers or ballistic plates are required and, again, only individuals may compete – no teams. Open Division firearms may be gas operated or bolt-action systems and shooters can expect to shoot out to 1,200 yards. Pistols also are required.

Team Division: Every team carries and employs two rifles and two pistols. Each team must use at least one rifle chambered in either .223 Remington/5.56 or .308 Winchester/7.62×51. The second rifle may be chambered in any caliber falling within the minimum and maximum cartridge parameters. The farthest distance with the primary rifle is 1,200 yards while competitors can expect to shoot tine out to 700 yards on secondary rigs – distances are approximate. Before the competition, each team must declare primary and secondary shooters, competitor roles within the team cannot be changed during the match and gear cannot be left behind.

All Divisions: All gear is required to be carried throughout stages and penalties for violations. These penalties can range from deductions to complete loss of stage points. Teams are permitted to retrieve lost or abandoned gear during stages; however, they are on the clock – gathering dropped gear means less shooting opportunities, less time to clear stages, and less impact. Competitors also must wear ballistic plates weighing a minimum of 15 lbs. for men and 12 lbs. for women — again, only for team and individual Gas or bolt-action competition.

Pistols must employ iron sights or slide-ride style optics — no frame-mounted dots. Magazines must be 140mm or shorter.

I had the opportunity to jump into a quick Q&A with Jeremy Moore, the Sniper Challenge administrator in charge of the event I attended in Garrettsville, Ohio.

Kovats: What is the difference between the Tactical Games I covered previously and the Sniper Challenge?

Moore: “The biggest differences between traditional Tactical Games and Sniper Challenge events are stages and physical requirements. At the Tactical Games you covered during your last visit, you saw heavy weights, the yolks, fireman carries and all that. Sniper Challenge is a far departure from that. There are no yolks, fireman carries or plates out there. It’s sandbags.”

AK: Why such distinct differences between the two?

JM: Sniper Challenge is physical but only on about half the stages and purposed in getting the athlete’s heart rate up just before shooting. The other half of a Sniper Challenge is just straight-up shooting. These differences are greatest misconceptions people have. They hear Sniper Challenge and also know what regular Tactical Games consist of and think, “Oh we’re just going to do Tactical Game stuff but at further distances.” It couldn’t be further from the truth.

For more information about the Sniper Challenge and other Tactical Games events, as well as match dates and locations, visit www.TheTacticalGames.com.

One to wear many hats, Anna Kovats is an unapologetic pro-2A constitutionalist that balances pew-pew time on the range with freelance outdoor writing, authoring a book, active pilot training, and travel agency work. While business is her comfort zone, she’s learning to make time for new endeavors – Tactical Game Skirmishes come to mind. 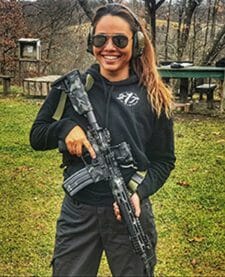 It’s always good to push yourself. Just gotta keep the ego in check