This article 1st appeared on AmmoLand News on January 5, 2015.

USA –-(Ammoland.com)- Another Obama administration Fast and Furious cover-up has been undone by Judicial Watch. The Fast and Furious photos JW has obtained from the site of a 2013 gang-style assault on a Phoenix, AZ, apartment building are gruesome.

They are graphic. And they dramatically illustrate the results of the Obama administration’s abuse of power and the public trust.

The photos were produced by the Phoenix Police Department in response to this lawsuit (Judicial Watch v. City of Phoenix (No. CV2014- 012018)). Other documents forced out through the lawsuit had already traced the gun to the Obama Department of Justice (DOJ) Operation Fast and Furious gunrunning program.

I must warn you that these crime scene photos are not for the squeamish, but they include:

As you know, Fast and Furious was a joint Justice Department-Bureau of Alcohol, Tobacco, Firearms, and Explosives gun-running operation that the Holder Department of Justice perpetrated in the hopes that it would bolster their gun control proposals in the U.S. The idea was to allow guns to find their way into the arms of Mexican drug cartel members who would use them in criminal operations. Some of the weapons used in Fast and Furious have been implicated in the murder of Border Patrol Agent Brian Terry and hundreds of innocent Mexicans.

But the violent impact of Fast and Furious — and its cover-up — continues to this day.

In the weeks following the July 29, 2013, assault in Phoenix, four suspects were apprehended in a raid conducted jointly by Phoenix police detectives and investigators from the Department of Homeland Security (DHS). According to press reports at the time “numerous rifles and handguns” were found when, “Detectives from the Phoenix Police Department and Homeland Security Investigations served federal search warrants.” The presence of DHS investigators immediately raised questions because Phoenix was the central location of the ATF’s deadly Fast and Furious gunrunning operation.

On October 16, 2014, we announced that, based upon information uncovered through our October 2 public records lawsuit, the U.S. Congress had confirmed that the rifle was tied to the Fast and Furious operation.  Attorney General Eric Holder has already admitted that guns from the Fast and Furious scandal are expected to be used in criminal activity on both sides of the U.S.-Mexico border for years to come.

It is worth noting that local officials and federal officials have been less than cooperative with information requests. Although the crime scene photos obtained by Judicial Watch clearly revealed a serial number that would show that the AK-47 used in the commission of the crime was a Fast and Furious weapon, the City of Phoenix and the Department of Justice failed to turn over the incriminating photos to Congress, despite longstanding requests for such information. According to our sources, investigators knew at the scene and subsequently that the AK-47 was a Fast and Furious weapon.

The failure to provide Congress with reports about the Phoenix crime scene is not the first time the Obama Justice Department has been accused of withholding Fast and Furious information. On June 28, 2012, Attorney General Eric Holder was held in contempt by the House of Representatives over his refusal to turn over documents about why the Obama administration may have lied to Congress and refused for months to disclose the truth about the gunrunning operation.

It marked the first time in U.S. history a sitting Attorney General was held in contempt of Congress.

Separate Judicial Watch litigation for these documents, which had been subjected to an extraordinary executive privilege reelection season claim by President Obama, forced their release.  Attorney General Holder announced his surprise retirement two days after the federal court ruling that led to the disclosure of the documents and to President Obama’s abandoning all of his controversial executive privilege claims that had kept the documents secret for nearly three years.

As with the IRS and Benghazi cover-ups, JW has forced the release of Fast and Furious information that Congress was simply unable to get. Even as the evidence and casualties mount, the Obama administration is still secreting information about its reckless program.

So we will keep digging and keep you fully posted on future developments.

Judicial Watch, Inc., a conservative, non-partisan educational foundation, promotes transparency, accountability and integrity in government, politics and the law. Through its educational endeavors, Judicial Watch advocates high standards of ethics and morality in our nation’s public life and seeks to ensure that political and judicial officials do not abuse the powers entrusted to them by the American people. Judicial Watch fulfills its educational mission through litigation, investigations, and public outreach. Visit: www.judicialwatch.org

“Because No One Is Above The Law”

Another artifact for the Smithsonian Museum’s Obama/Biden Scandal and Corruption wing. Preserve that evidence and history lesson.

Act of treason aiding and abetting? If it’s history they’ll re-write or bury it.

The Ovomit / Traitor Joe regime, and their cabinet members, are not cute bad boys, they are Evil.

Judicial Watch is an excellent outfit. So is Project Veritas. My question is : What has changed due to their excellent work exposing these evil turds? Nothing is the short answer. And why? Because going back 40 years or more, the Department of Justice – the FBI – they are more corrupt than any other agencies in the Federal Government. How do we know? Bill Clinton, Hillary Clinton, Bill Barr, Comey, Obama, Holder, Biden, and the list is endless, are out walking free. Nothing will change.

Keep it coming, JW. I’ll be sending my annual contribution by year’s end. 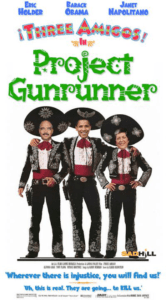